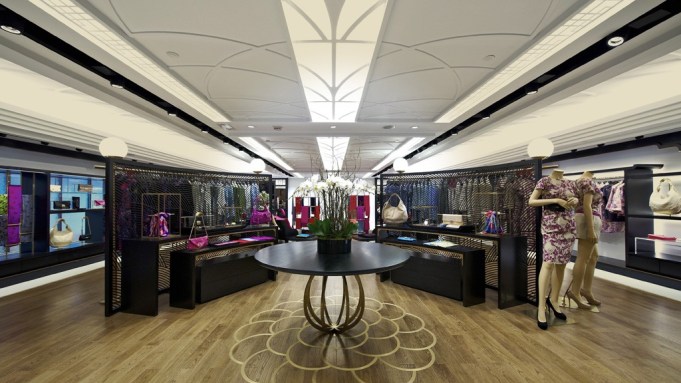 HONG KONG — Shanghai Tang has opened a 15,000-square-foot flagship store in Hong Kong, six months after moving out of its iconic Pedder Street location due to escalating rents.

The new store, just a few blocks away from its original location, was designed by Design MVW, a firm founded by French architect Virginie Moriette and Chinese designer Xu Ming. The three-story shop incorporates numerous Chinese architectural and design details with a modern twist. The entrance is dominated by a high ceiling and crystal chandelier that’s in the shape of the auspicious Shou symbol, meaning longevity. An elaborate Art Deco-style wrought iron staircase is a nod to the brand’s former Pedder store, which had a similar staircase.

There are numerous other details in the brand’s style. The changing room in the children’s area resembles a bright yellow tea caddy. The women’s section features feminine lines such as a curved ceiling and a brass inlay in the shape of a peony flower on the wood floor. The men’s wear section, by contrast, features clean, straight lines and a Shou symbol on the floor. Fragrances are displayed in shelves shaped like Chinese cloud motifs.

Women’s wear is on the first and second floors, children’s wear and custom tailoring on the second, and men’s wear and home accessories on the third. A fourth floor is currently under development to be opened at a later date, not yet disclosed. With an additional basement level for staff members, the new store has five stories altogether and is the Richemont-owned brand’s largest flagship store globally.

Shanghai Tang closed its Pedder Street flagship store, which it occupied for 17 years, in October. While preparing to open its new store, the company set up two temporary locations including a playful “Mongolian Village” featuring several Mongolian gers. That has since closed.