Shanghai Tang is hoping the third time's a charm. 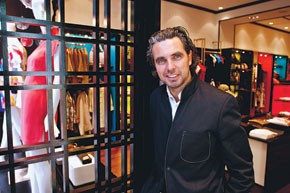 Shanghai Tang is hoping the third time’s a charm.

The new 3,200-square-foot boutique, located at 600 Madison Avenue, has a modernized feeling to its 2,000 square feet of selling space that continues to feature the brand’s signature colors such as lime and fuchsia highlighting black lacquer fixtures. The store also retains the Thirties Art Deco feel of Shanghai that’s inherent in the brand, and the lacquered wood cabinets that include the Chinese symbol for longevity.

The current boutique is the third attempt at finding the right mix of location and floor plan. The brand, which was founded by David Tang, arrived on the New York retail scene in 1997.

“The retail experience embraces our unique shopping experience, which entices all senses: the vibrancy of colors; the luxurious feel of our products made from the finest Mongolian cashmere or Chinese silk; the distinctive remixed and remastered Chinese jazz, and the inviting scent of our world-renowned ginger lily fragrance,” le Masne de Chermont said.

According to Le Masne de Chermont, Shanghai Tang has 30 stores worldwide. The plan is to have a total of 40 within the next 12 months, with most of the new stores located in China in time for the Beijing Summer Olympics. A new store will open in Las Vegas in July. The company hopes to open a Los Angeles store at some point, and will open a site in Madrid later this year. For New York, the company is also planning a “showroom” concept boutique in a downtown location “in the near future,” he said.

“Today about 80 percent of Shanghai Tang stores around the world, including Hong Kong, Shanghai, London, as well as our other U.S. locations in Hawaii and Miami, are decorated under the new concept,” le Masne de Chermont said.

However, the original 12,000-square-foot flagship in Hong Kong at the historic Pedder Building in the city’s Central District will retain the founding concept featuring the aesthetics of old Shanghai.

The store is planning a store opening party tonight in conjunction with the Guggenheim Young Collectors Council.