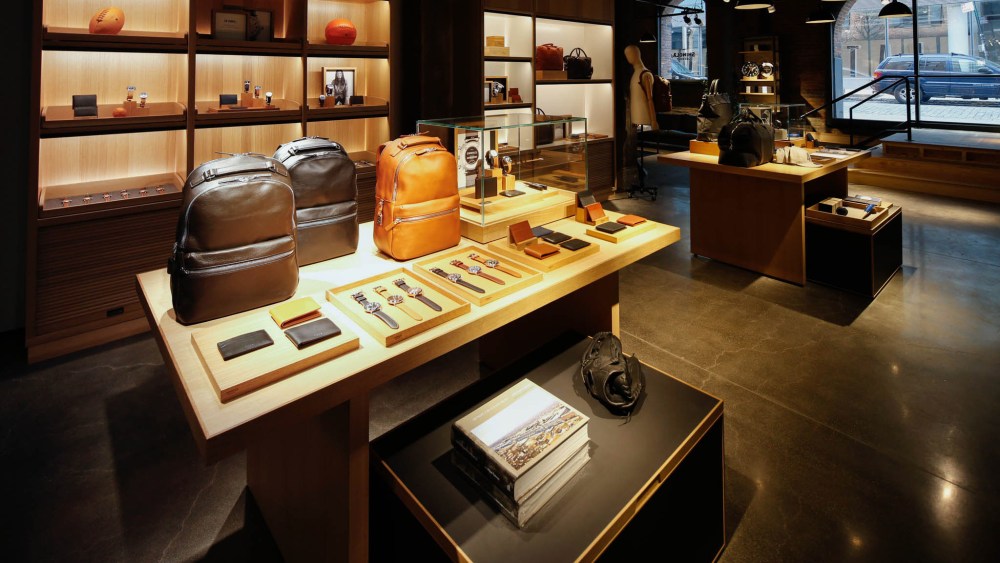 NEW YORK — Shinola is bringing its Built in America message to Brooklyn.

The Detroit-based accessories brand today will open a 2,651-square-foot store at 49 Water Street in the shadows of the Brooklyn Bridge in the trendy DUMBO district.

The unit is located in a new complex called Empire Stores, which is a repurposed waterfront storehouse from the 1800s that retains its brick masonry facade, structural rock walls and heavy frame timber construction. The location was home to the first commercial production facility for roasted coffee and is being developed into a mixed-use property with stores, cafés, restaurants and offices that are expected to be open this summer. Shinola is the first retail tenant.

Daniel Caudill, creative director for Shinola, said the store, which was designed in collaboration with Gachot Studios of New York, is “simple,” and intended to “keep the integrity of the building.” An historic stone wall was retained in the rear and the original rafters and beams were exposed. “The building is so beautiful, so we kept everything we could,” he said.

The store is the brand’s second-largest unit, after Los Angeles, but Caudill said that because the West Coast location also has a restaurant and tattoo parlor, there is more selling space in Brooklyn.

It features the company’s entire assortment of watches; leather goods; audio equipment, including turntables and speakers; bicycles; journals and notebooks, and women’s jewelry. Inside the main Water Street entrance at the front of the men’s department is the company’s limited-edition Jackie Robinson watch, part of the brand’s Great American series, which will make its debut at the store.

The watch, which retails for $1,500, comes with a postcard, commemorative pins, a mini Brooklyn pennant and a letter from Robinson’s wife Rachel. Only 442 of the watches were made — a reference to the athlete’s retired uniform number of 42 — and Shinola also collaborated with New Era on a special baseball cap with his number on the front.

Caudill said that although Robinson played for the Brooklyn Dodgers, Shinola said it had always intended to create a watch to celebrate him and it was “just a lucky coincide” that the DUMBO store is opening in time for Jackie Robinson Day on Saturday.

In fact, Shinola on Saturday will host a block party to celebrate the store opening — and Robinson — with music by DJ Questlove, who will be using the company’s turntables, as well as ballpark snacks from Smiles Café and Brooklyn Ice Cream Factory, along with other activities. Twenty percent of the day’s sales will be donated to Answer the Call, an organization supporting families of fallen servicemen and women of the New York City Police Department and the Fire Department of the City of New York.

“We love a block party,” Caudill said. “It’s very American and allows us to celebrate with everybody in the area.”

In addition to the opening party, the store itself  boasts a number of special features and products. There are watch straps that have been made from vintage baseball gloves that are being offered as part of the company’s Willard Program, a customizable watch bar. Customers can pick their own watch body and then select a strap from among the dozens offered. Caudill said that since launching two years ago, customized watches now account for as much as 20 percent of overall watch sales in some stores.

New products, including belts, the turntable and speakers, a collection of nylon bags and a “much more robust women’s offering” are also featured in the shop. That includes the partnership with jewelry designer Pamela Love, who created a line of high-end jewelry for Shinola last year.

A monogram station allows shoppers to customize paper or leather goods. “Personalization has become a big part of what we do,” he said.

Customers interested in buying a Shinola bike can actually test them out with a ride on the Brooklyn waterfront.

In the rear of the store is the Brooklyn debut of Smile to Go café, which will sell prepared foods, pastries and snacks that customers can enjoy at tables along the stone wall in the back. When Empire Stores is fully leased, customers will be able to leave through the back to access the other shops in the complex.

“It’ll definitely be a destination,” Caudill said. “This area has a combination of families and tourists, so it should really do well.”

On the walls of the store will be portraits of about 30 Shinola employees with plaques detailing their names and positions within the company. The idea, he said, is to reinforce the brand’s overarching mission to produce quality products in America across a number of categories.

“We encourage everyone to come to Detroit and see what we’re doing,” Caudill said. But for those who can’t make the trip, the store is intended to showcase the craftsmanship of American manufacturing and Shinola’s commitment to “creating jobs and factories in the U.S.”

Caudill said consumers today “are smarter about how they spend their money and while they might be drawn to a product, they want to know what’s behind it. For us, that’s job creation and building factories in the U.S. And that’s why people have become fans of the brand.”

The Brooklyn store is Shinola’s 23rd in the U.S. and before Memorial Day, another four are slated to open: on Prince Street in SoHo (a unit that will be heavily focused on the women’s offering), Dallas, Denver and Troy, Mich. Two in-store shops within Isetan in Japan are also planned for May.