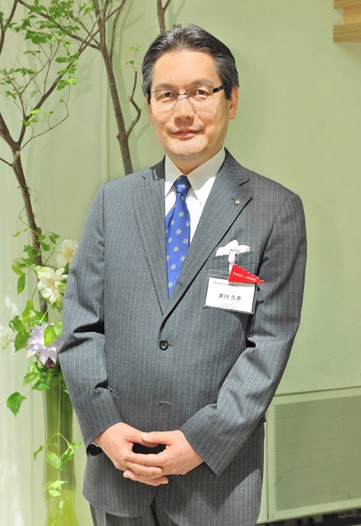 The new space, dubbed Shiseido the Ginza, is scheduled to open Saturday.  It replaces a multibrand fashion store the beauty giant used to manage.

“We are convinced that improving the vibrancy of Ginza will burnish the appeal of Tokyo, which in turn will energize the Japanese nation,” said Shiseido’s president and chief executive officer, Hisayuki Suekawa. “With this project, we will open a new chapter in the long histories of Shiseido and Ginza.”

Suekawa said the store is part of a three-tiered plan to solidify Shiseido’s presence in Tokyo’s upmarket Ginza district. The other two initiatives are renovations to the company’s neighboring building, which houses restaurants, a deli and a gallery, and the rebuilding of Shiseido’s corporate headquarters, demolition of which will start at the end of the month.

The new store’s ground floor color cosmetics area features one of Shiseido’s most interesting technological innovations. Shoppers can pick up an item, scan it over a reader and then gaze into a mirror only to see the selected color appear on their lips, eyelids or cheeks. Upstairs, they can receive skin care consultations or book lessons on how to apply makeup. Freshly coiffed, they can have their pictures taken at a professional photo studio. There is also a Clé de Peau Beauté salon and spa offering facial and body treatments.

Although there are currently no plans to replicate the store’s entire concept in other cities, Suekawa said that “certain elements” would be implemented at other Shiseido sales points.

“For example, the makeup simulator [technology] might be used in other places, or even on our home page,” he said. “We’ll listen to customers’ opinions and then decide [what things to use where].”

Although Suekawa declined to give an investment figure for the project, he noted that it was a “considerable amount.”

But he also voiced concern over the ongoing situation at an overheated nuclear power plant about 150 miles north of Tokyo and how radiation fears are keeping foreign tourists out of Ginza, a key shopping neighborhood.

“I don’t know by what percentage the number of tourists has declined, but tour buses used to stop outside this building a few times every day,” he said. “Now we almost never see them.”

While Suekawa conceded that Shiseido alone cannot improve the flow of shoppers and tourists to Ginza, he mentioned that Shiseido the Ginza is one way the company is doing its part to increase the area’s appeal.