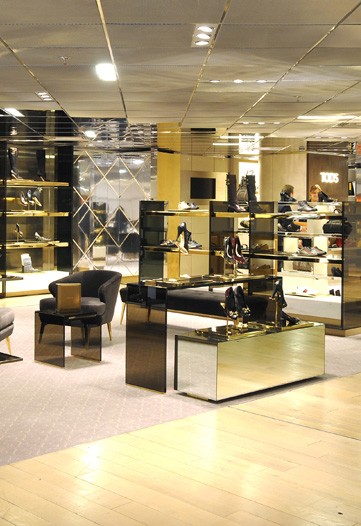 Its commercial space of 34,500 square feet almost doubles the previous shoe department in the Boulevard Haussmann building and is about one-third larger than the shoe space at Harrods and Saks Fifth Avenue.

It’s not a coincidence the shoe-addict Mecca has opened here.

According to Galeries Lafayette, French women are Europe’s largest consumers of shoes, buying an average of six pairs a year. They are also avid footwear collectors, with 17 percent admitting to owning more than 20 pairs of shoes.

“Shoes have become the number-one desire, ahead of sunglasses and bags,” said Galeries Lafayette managing director Paul Delaoutre, asserting that 75 percent of French women aren’t concerned with the price tag of a pair of “dream shoes.”

Catering to the requirements of foreign visitors of the store, notably from China and Russia, there is a wide range of footwear sizes. Prices prices start at around 99 euros, or $138, rising to 1,300 euros, or $1,816, for designer brands.

Sandals and winter boots will be available year-round, meeting the needs of French shoppers preparing for a vacation, as well as those of tourists.

Once the entire floor is ready for the fall season at the end of August, it will carry 150 brands, 75 of which will be exclusive to Galeries Lafayette.

“This is what makes the difference for a department store,” said Michel Roulleau, Galeries’ deputy managing director.

With the official inauguration in September, additional services such as pedicures and an artisan cobbler will be available, as well as a personal shopping service.