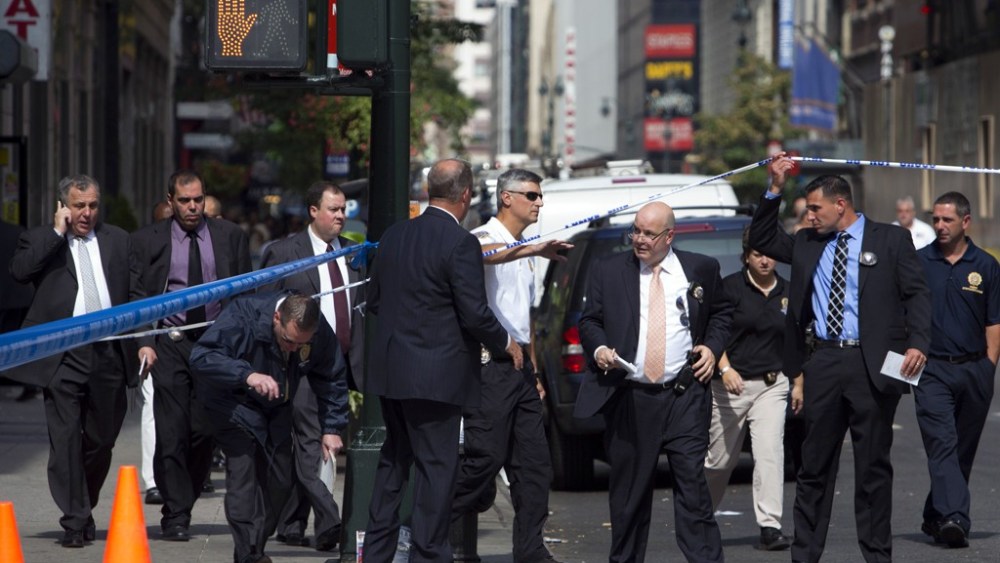 NEW YORK — Jeffrey Johnson, 58, was identified as the lone gunman who killed former co-worker Steve Ercolino, 41, vice president of sales at Hazan Import Corp., outside the Empire State Building Friday morning. Johnson was then shot and killed by a policeman on duty in the area. Nine bystanders were wounded in the gunfire, but it hasn’t been determined whether the bullets came from the gunman or the police.

Police commissioner Raymond Kelly described Johnson as a “disgruntled former employee” at Hazan, a 40-year-old New York-based handbag and accessories firm. According to a source close to the company, Johnson worked at Hazan for 15 years and was laid off about two years ago by Ercolino. Johnson designed line sheets and catalogues.

RELATED STORY: Retail Back to Normal After N.Y.C. Shooting >>

“He seemed like a pretty normal guy,” John Koch, the superintendant of 10 West 33rd Street, where Hazan Imports is based,  said of the gunman. “He hasn’t worked here in a while.” Koch added that he knew Ercolino and Johnson “didn’t like each other” but declined to elaborate further. He said the building is still open through its freight entrance, but most people have vacated the building and shut their phones off.

“It wasn’t like he [Johnson] did anything wrong,” a source at Hazan said, as to why Johnson was laid off. “It was simply economics.”

Ercolino, a native New Yorker who graduated from the State University of New York Oneonta, got his start in the business selling dresses for his father, who ran a women’s apparel business here in New York. “Steve was with us for six or seven years,” the source said. “He was a top salesman. His customers loved him. He had a personal connection with them. He was a great salesman who knew his craft.”

Ercolino, who lived with his girlfriend in New Jersey, did not have any children. He was said to have gotten engaged several months ago. The source said he does have brothers and sisters. He didn’t know if Ercolino’s parents were still alive. No one answered the phone at an Ercolino address in Warwick, N.Y.

Hazan Imports was started by brothers Isaac Hazan and Ralph Hazan. Isaac died in 2009. According to sources, the company sold private-label merchandise to midtier department stores such as Kohl’s Corp. Kohl’s couldn’t be reached for comment, and it couldn’t be confirmed whether it sells Hazan’s products.

Prior to joining Hazan,  Ercolino was with the Bestesh Group and Jump Apparel.

Terry Friedman, president of Jump Apparel, worked with Ercolino when he was head of junior dress sales at Jump. “He was a good guy. He didn’t deserve to be shot. It’s incomprehensible that someone can come up to you and shoot you on the street.” He said Ercolino worked for Jump when he was fresh out of school. “His family had been in the industry for years,” he said.

According to press reports, Johnson attended the Ringling College of Art and Design in Florida, and was the sole proprietor of a T-shirt company, St. Jolly T-shirt Art. Johnson offered iron-on illustrations for T-shirts and greeting cards. According to his Web site, illustrations included sports cars, jets and motorcycles, as well as car caricatures and scenery. Sources said Johnson had been fired from the company because he was doing too much work for his own business when he was supposed to be working for Hazan. Johnson had no criminal record, and his handgun was purchased in Florida in 1991, according to law enforcement sources.

According to press reports, even after Johnson was laid off, he would leave his East 82nd Street apartment every day, dressed in a suit, and would return to his apartment after getting breakfast at McDonald’s. Johnson, described as a slight man with brownish hair, reportedly lived alone in a one-bedroom apartment that he was subletting from someone else.

According to reports, back in April 2011, there was a police report that Johnson had threatened to kill Ercolino.

Commercial access around the Empire State Building was blocked off for several hours Friday. Fifth Avenue between 42nd and 33rd Streets was closed to vehicular traffic, as was 34th Street, from Park Avenue to Seventh Avenue. Macy’s, which is a block away from the Empire State Building, remained open for business. “Fifth Avenue was shut down to vehicular traffic. Foot traffic is still normal. Our store is open,” said a Macy’s spokeswoman. Banana Republic, at 17 West 34th Street, stayed closed on Friday.

Kelly said the incident occurred at 9:03 a.m. in front of 10 West 33rd Street, where Johnson, wearing a suit and tie and carrying a briefcase, walked up to Ercolino, put a gun to his head and fired three times, once in the head. The two had traded accusations of harassment when Johnson was employed there, said Kelly. The gunman fled to Fifth Avenue, where a construction worker who saw the shooting followed Johnson and alerted police, officials said. Surveillance video footage shows images of Johnson reaching into a bag and pulling out a .45-caliber pistol and aiming it at the officers, Kelly said. The officers drew their weapons and started firing, killing Johnson. Some bystanders were also injured in the shoot-out.

The two officers fired 14 rounds, said Kelly. Mayor Michael Bloomberg said some of the nine wounded may have been shot by police in the ensuing melee. The wounded were five women and four men, according to authorities. Bloomberg said the nine people were taken to local hospitals with non life-threatening injuries. Six were being treated at Bellevue Hospital and three at New York-Presbyterian Hospital/Weill-Cornell Medical Center.

Hazan Import Corp. is owned by Ralph Hazan. According to public records, Hazan and his wife Sharon, who is the company’s vice president, reside in West Long Branch, N.J.

Hazan had not been a high-profile company prior to today’s incident. But it was in the news in 2003, when Louis Vuitton sued the company for trademark infringement, trademark dilution, unfair competition and false designation of origin.

Settled out of court in 2005, the suit, which was filed in the Southern District of New York, claimed that the handbag and accessories maker infringed on Vuitton’s trademarks, including its toile monogram mark. Vuitton, which filed suit against Isaac Hazan, cited in court papers as the company’s principal, as well as the company itself, had just introduced its toile monogram Murakami bags in October 2002. The bags had made their debut at Vuitton’s spring 2003 fashion show in Paris, and were an “instant success,” according to court papers.

Shortly after the bags hit the market, Vuitton saw evidence that Hazan had manufactured bags featuring the toile monogram pattern.

After two years of back and forth between both sides, Vuitton and Hazan decided to settle the matter out of court for an undisclosed sum.