Shopbop Gets Physical for 20th Anniversary With SoHo Pop-up

The Spring Street location, which opens its doors tomorrow, is the fashion retailer's first pop-up.

For its 20th anniversary, Shopbop is going back to its physical roots with the help of a few old friends.

Known as a global online retailer that is now owned by Amazon, it actually started life as a modest clothing store called Bop, targeted at local college students in downtown Madison, Wis.

On Friday, five years after Bop closed its doors, Shopbop will come full circle as it unveils a 5,000-square-foot pop-up in SoHo in Manhattan to mark two decades in business.

“We wanted to bring Shopbop to life,” said brand president Shira Suveyke from the Spring Street location, the retailer’s first pop-up, as her team hurriedly put together the finishing touches of cacti and ivy. “It felt like the perfect moment to celebrate our history.”

Having been out of the brick-and-mortar game for some time meant that opening a sprawling space in the heart of New York City was no easy task, with Suveyke describing it as a “big” but “exciting” undertaking.

So Suveyke, who joined Shopbop from Yoox Net-a-porter last year, turned to some familiar faces for the pop-up. “The manager who’s helping support the pop-up worked at the Bop store,” she explained, adding that she even brought back some former Bop employees, who no longer work at Shopbop, to consult.

That doesn’t mean that the Shopbop pop-up will mirror the Bop store.

In fact, it has fully embraced the experiential trend that has overtaken fashion in the past couple of years, with a flower shop by Popup Florist, a Juice Press, a La Colombe coffee bar, a Levi’s customization station and a Zoë Chicco jewelry customization area, all available throughout its whole run, which ends Sept. 22. 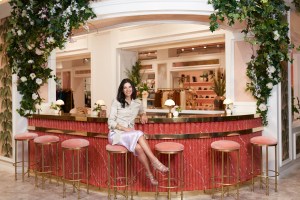 Shopbop will also offer as many as three daily events for customers, from morning yoga with Y7 and meditation with MNDFL, to influencer styling events with the likes of Arielle Charnas of Something Navy, to panels with top industry talent.

“From the outset, we knew that our customer wanted to be closer to Shopbop in an experiential way — not just to have another place to shop. That is why we leaned into programming being an incredibly important part of what we built and wanting everything to feel like an experience,” Suveyke said.

Also available in store will be items from The Twenty, an exclusive collection of 20 plucked-from-the-runway pieces from 20 leading designers, which debuts online today. Curated by Shopbop fashion director Caroline Maguire, the collection includes pieces from Isabel Marant, Zimmermann, MSGM, ACNE, and Sandy Liang.

“Exclusive collections over the years have become quite diluted,” she mused. “Often, they’re just in another color and it doesn’t feel unique or special to the customer. So it was important to us that if we were going to do another capsule that those pieces be important and unique, and that’s how we decided to work with designers on pulling from their runway collections and presentations.” 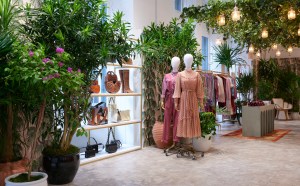 It will be launched in conjunction with Shopbop’s new campaign #StyleSupport, which pays homage to style-centric exchanges shared by friends daily, from “Do I wear heels or flats?” to “The invite says dressy casual. Help.” It was shot by photographer Clara Balzary and features a mix of tastemakers, creatives and models such as Aiden Curtis, Sasha and MaryV Benoit.

But while the store will be chock-a-bloc with Shopbop’s latest fashion offerings and experiences, notably absent will be East Dane, its brother site, which offers contemporary and emerging men’s wear brands.

That’s because, according to Suveyke, while the male customer is key in the company’s growth initiatives over the next three years, she wanted to create an environment that felt holistic to the Shopbop customer who has been with it for 20 years.

“To properly create the right environment for the male customer, we didn’t want to just put it in the back corner of the store and sort of nod to him,” she said. “At some point we’ll be in a place where we’re ready to celebrate the East Dane customer. But this felt like Shopbop’s moment.”