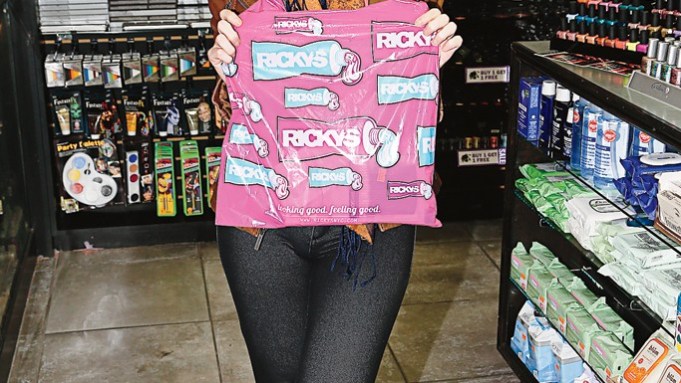 With her kit in tow, ABC makeup artist Lisa Hayes stopped at Ricky’s to pick up a few essentials before work. Citing Urban Decay, Giorgio Armani, Nars and Yves Saint Laurent as her go-to brands, the 28-year- old spends around $15,000 annually on beauty products. “It’s more than the average person, but that’s because I’m working on TV everyday,” says Hayes. “I’m constantly purchasing new products for my clients.” Once a month, Hayes likes to shop various stores to see what’s new. “I love to experiment with new products,” says Hayes, “because not one line has it all and things work differently on different people.” When it comes to her own morning regimen, Hayes keeps it simple. “Just Giorgio Armani foundation,” she says. “I have to be at work at 5 a.m., so that’s it for me.”

Before a trip to Miami, Erica Shimon, 31, headed to Blue Mercury to stock up on sunscreen and skin care and purchase an M-61 eye cream she had been given a sample of the last time she was in. “They’re very personable here,” says Shimon. “Sometimes when I go to other stores, they don’t really know what they’re talking about, but here they seem really trained on the merchandise.” No stranger to beauty, the freelance makeup artist spends $3,000 to $5,000 annually on beauty products. When she’s shopping, Shimon likes to use phone apps like Pop Sugar and Beautylish to guide her to new products and stores. But the beauty junkie is not so keen on reading product reviews. “I used to, but not so much anymore,” she admits. “I realized that a lot of them were off. Maybe it’s because I’m in the industry.”