The launch brought more than 300 customers to the store. Some waited 13 hours in line.

By Sharon Edelson and Rachel Brown on November 22, 2010
View Slideshow 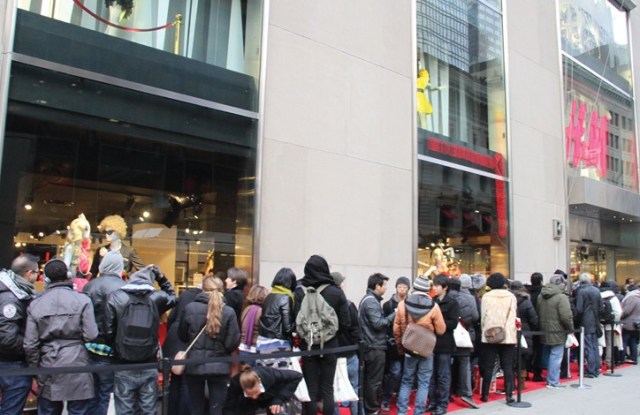 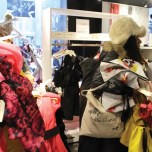 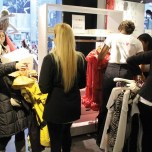 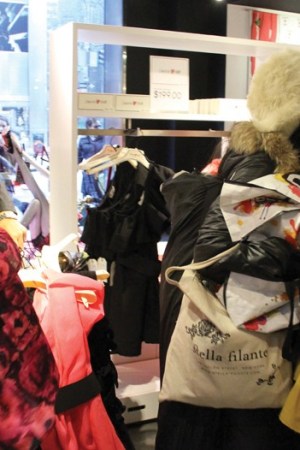 Just before 8 a.m. on Saturday, a black Town Car slid up to the curb across from the H&M flagship at 640 Fifth Avenue in Manhattan. Alber Elbaz was sitting in the back seat marveling at the line of customers who came for the launch his Lanvin (Hearts) H&M collection. “We stayed in New York one more night so we could see this,” said Elbaz. Surveying the scene, he said, “I don’t dare go in,” explaining that he didn’t want to cause a riot. “I can’t believe it. I was sure there would be no one. I was a bit panicked. This is a once in a lifetime experience.”

This story first appeared in the November 22, 2010 issue of WWD. Subscribe Today.

Peter Park of Flushing, N.Y., waited 13 hours to get into the store.

The retailer used a system of colored bracelets. Rather than let customers rush into the store all at once, which has been a recipe for chaos at previous introductions, H&M allowed 16 groups of 20 people each, who entered the store in a block with the same bracelet color, to shop for women’s merchandise, which was blocked off, for 15 minutes. The store also limited purchases to two pieces per style. There were no restrictions for men’s wear.

Margareta van den Bosch, the former head of design for H&M and now a creative consultant, and her successor, Ann-Sofie Johansson, who are based in Sweden, were at the store sizing up the launch.

Daniel Kulle, president of H&M North America, was replenishing merchandise and assisting customers. “I’m restocking to get feedback,” he said. “We want them to have a good shopping experience. We’re keeping it in control so the rest of the store can work.” He predicted that the collection would “sell out today or tomorrow.’’ Jewelry and shoes went very quickly. I can’t find any.”

“Lanvin is my favorite designer partnership so far,” said Virgil Sparks, a freelance designer. “The only thing that was disappointing is that it’s all taken from what [Alber Elbaz] has done before. It’s not his vision of a lower price point of view.”

“The quality is the best I’ve seen of any H&M collection or even Target,” said Nathalia Powell, who just finished an internship at Net-a-porter.

Nicole McCrery, who works in marketing, was buying the whimsical T-shirts: “The dresses aren’t as good as I expected. The material is stiff.”

Caitlin, who declined to give her last name, said the quality was good, but the sizes “itsy bitsy.” She still managed to spend $1,800.

An H&M spokeswoman said Lanvin (Hearts) H&M is in 24 U.S. stores, twice the number of stores than previous collections.

In Los Angeles and Orange counties, the Lanvin (Hearts) H&M collection was available at H&M stores in the shopping centers Beverly Center, Americana at Brand, Westfield Century City and South Coast Plaza, and on Sunset Boulevard. At the eighth-floor Beverly Center location, about 300 people lined up before doors swung open at 8 a.m., two hours before the store usually opens on Saturdays.

Kiki Wang, a 35-year-old office manager, arrived at the Beverly Center at 9:30 p.m. on Friday night and scored the first position in the line. “I was here last year for Jimmy Choo at 11, and there were seven people in front of me, and I wanted to be the first person in line,” said Wang.

Prohibited by the Beverly Center to stay in the sheltered mall overnight, those who came late Friday or in the early Saturday morning hours mostly huddled in the elevator banks flanking the outside of the mall, at Macy’s valet parking or under what awnings they could find.

Hannah Chang, a 23-year-old student, was among the initial people to ring up her Lanvin (Hearts) H&M purchases. “The dresses were too expensive,” said Chang. “You don’t get to wear them much.”

Most shoppers didn’t hold back. Wensen Ho, a 30-year-old who works in advertising, spent around $3,000 buying virtually every item from the women’s assortment for his wife. “She is pregnant and can’t be here, so I am doing a run,” he said.

Amanda Nguyen, a 22-year-old graduate student, felt that the collection’s quality justified higher prices. “[Alber Elbaz] said he wanted to maintain the look,” she said. “Sometimes these collaborations are cheaper, and it [Lanvin (Hearts) H&M] is a direct representation of the runway.”

Among the shoppers at the H&M in Beverly Center, awareness of Lanvin varied.

Nicole Eng, a 27-year-old graphic designer, said, “It was this collection that really introduced me to Lanvin.” Eng ended up spending $1,700 on Lanvin (Hearts) H&M. She said it was ‘’the most I’ve ever spent in my life.’’