Retail Back to Normal After N.Y.C. Shooting

By Lisa Lockwood and Alexandra Steigrad and Rosemary Feitelberg and Jessica Iredale on August 26, 2012
View Slideshow 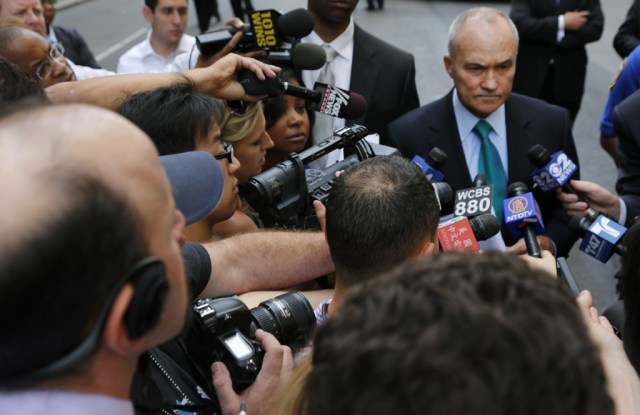 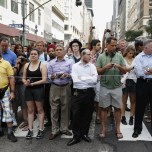 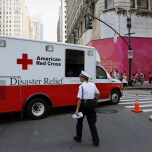 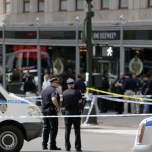 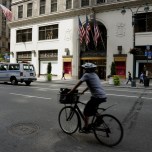 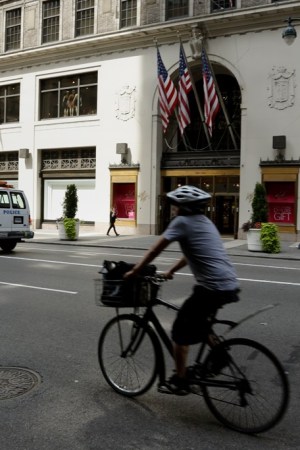 The scene after a fatal shooting near the Empire State Building on Aug. 24 in New York. 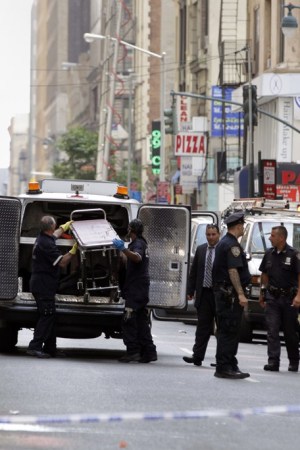 The scene after a fatal shooting near the Empire State Building on Aug. 24 in New York.

This story first appeared in the August 27, 2012 issue of WWD. Subscribe Today.

By Sunday, 34th Street was flooded with tourists. A manager at the Bebe located at 1 West 34th Street said that it had been hit hard by the shooting on Friday, when the store had to be closed until 1 p.m. “It was really slow on Saturday,” she said, noting that traffic was picking up on Sunday. “They just didn’t make any money, and SoHo was doing really well. It wasn’t just a slow day, it was what happened.”

Banana Republic also had to close its 17 West 34th Street store on Friday for police investigation, but the manager on Sunday reported that numbers from the weekend looked good. “We get a lot of tourists, so they might be aware of [the crime,”] she said. Meanwhile, the manager at Uniqlo, 31 West 34th Street, said that Saturday had been busier than usual. The store opened at 1 p.m. on Friday, and Sunday seemed “average.”

It was total mayhem in Midtown on Friday morning when Jeffrey Johnson, 58, a former employee of Hazan, shot and killed Ercolino as he was arriving at his office at 10 West 33rd Street. Johnson then walked around the corner to Fifth Avenue, where a construction worker who saw the shooting alerted police at the Empire State Building. Johnson reached into a bag and pulled out a .45-caliber pistol and aimed it at the officers. The officers drew their weapons and started firing, killing Johnson. Nine bystanders were also injured in the shoot-out. Mayor Michael Bloomberg said they were taken to local hospitals with non- life-threatening injuries. Six were being treated at Bellevue Hospital and three at New York-Presbyterian Hospital/Weill-Cornell Medical Center.

Police Commissioner Ray Kelly described Johnson as a “disgruntled former employee” of Hazan, a 40-year-old New York handbag and accessories firm. Johnson, a graphic artist, worked at Hazan for 15 years and was laid off about two years ago. He designed line sheets, took pictures and catalogued them.

“He seemed like a pretty normal guy,” John Koch, the superintendant of 10 West 33rd Street, where Hazan Imports is based, said of the gunman. “He hasn’t worked here in a while.” Koch added that he knew Ercolino and Johnson “didn’t like each other,” but declined to elaborate further.

According to press reports, Ercolino and Johnson had a long history of animosity toward each other. They had fought in an elevator in April, 2011, after Johnson lost his job at the company. Johnson reportedly threw an elbow and Ercolino grabbed his throat threatening to kill him. They each filed a police report at the Midtown police station, claiming each had been threatened by the other.

A source at Hazan described the circumstances of Johnson’s layoff and said it wasn’t due to job performance: “It wasn’t like he [Johnson] did anything wrong. It was simply economics.” Business at Hazan had slowed during the recession. Hazan Imports was started by brothers Isaac and Ralph Hazan. Isaac died in 2009. The company sells handbags, belts, shoes and accessories to stores such as Forever 21, Shopper’s World, Strawberry, Easy Pickins and Joyce Leslie.

Hazan had not been a high-profile company prior to Friday’s incident. But it was in the news in 2003, when Louis Vuitton sued the company for trademark infringement, trademark dilution, unfair competition and false designation of origin. Settled out of court in 2005, the suit, which was filed in the Southern District of New York, claimed that the handbag and accessories maker infringed on Vuitton’s trademarks, including its toile monogram mark. Vuitton, which filed suit against Isaac Hazan, cited in court papers as the company’s principal, as well as the company itself, had just introduced its toile monogram Murakami bags in October 2002. The bags had made their debut at Vuitton’s spring 2003 fashion show in Paris, and were an “instant success,” according to court papers. Shortly after the bags hit the market, Vuitton saw evidence that Hazan had manufactured bags featuring the toile monogram pattern. After two years of back and forth between both sides, Vuitton and Hazan decided to settle the matter out of court for an undisclosed sum.

Ercolino, a native New Yorker who graduated from the State University of New York Oneonta, got his start in the industry selling dresses for his father, who ran a women’s apparel business here in New York. “Steve was with us [Hazan] for six or seven years,” the source said. “He was a top salesman. His customers loved him. He had a personal connection with them. He was a great salesman who knew his craft.”

Prior to joining Hazan, Ercolino was with the Bestesh Group and Jump Apparel. Terry Friedman, president of Jump Apparel, worked with Ercolino when he was head of junior dress sales at Jump. “He was a good guy. He didn’t deserve to be shot,” said Friedman. “It’s incomprehensible that someone can come up to you and shoot you on the street.” He said Ercolino worked for Jump when he was fresh out of school. “His family had been in the industry for years,” he said.

Ercolino, who lived with his girlfriend in Hoboken, N.J., did not have any children. He is survived by a sister and two brothers, as well as his father, Francis. It couldn’t be learned if his mother was alive. Information on funeral services couldn’t be obtained at press time.

Over the weekend, details began to emerge about Johnson. Sources described him as a very dedicated worker, but a loner. While at Hazan, he never missed a day of work, never took a sick day nor a personal day. “He never took a lunch break and never left the office,” said a source. “He was so detail oriented and was great at what he did.” Johnson had reportedly told colleagues that he had a Japanese mother and an American father, and had spoken cryptically about past military service. One law enforcement official believed he may have served in the Coast Guard, according to press reports. He had a fascination with comic books from an early age. Johnson had a business called St. Jolly T-shirt Art, where he sold iron-on illustrations for T-shirts, greeting cards and coffee mugs. On his Web site, stjollysart.com, he featured his illustrations of sports cars, jets and motorcycles, as well as car caricatures and attractive women. Johnson attended the Ringling College of Art and Design in Florida for two years, but never received a certificate for the three-year program, according to press reports. He had no criminal record, and his handgun was purchased in Florida in 1991, said law enforcement sources.

Even after Johnson was laid off, he would leave his East 82nd Street apartment every day dressed in a suit, and would return to his apartment after getting breakfast at McDonald’s. Described as a fastidious, slight man with brownish hair, Johnson reportedly lived alone in a one-bedroom apartment that he was subletting from someone else. He had cats, and reportedly spent more time illustrating women than dating them.

Shortly after Bebe had opened its doors Friday morning, sales associate Jonathan Sinclair heard the gunshots and stepped outside to see what was happening. Once he saw a few victims on the ground, he ducked back into the store, locked the doors and tried to reassure the 15 to 20 passersby who had run into Bebe for shelter. “I saw people running and some dude holding his leg where he had been shot. Another one was lying on the ground right in front of the store,” Sinclair said.

Rattled as area workers and pedestrians were, most of the stores had reopened by 1 p.m. and were filled with nearly the same number of shoppers for a typical Friday afternoon. Within five minutes of reopening, Mango’s 7 West 34th Street store had “10 people in the door,” said manager Vanessa Freeman. As for whether the shooting will deter shoppers from hitting 34th Street, she said, “I think everyone is jaded. No one seems to care anymore.”

Three salesmen at Foot Locker at 11 West 34th Street agreed, describing the scene Friday as “business as usual.” Bebe’s comanager Erica Stubbs doesn’t expect the incident to damage the local retail scene in the long run. “Right now people are shocked and scared with all the police around and the barricades. This really isn’t an area where things like this happen, not that any area is really,” she said. “It might be a little slow for the rest of the day but this won’t change people’s view of 34th Street at all.”

One beauty executive, who asked not to be named, said his morning commute had been anything but that. Walking north across 34th Street, he heard eight or nine gunshots, saw the man beside him drop to the ground from a bullet wound, then saw another man stumble from being shot in the arm and a woman across the street fall to the sidewalk after being shot in the foot. Although he had his back to the gunman, he could tell by the expressions of the people walking towards him, and the speed at which they were running, that they could see Johnson. The executive said he darted to one of the oversize 34th Street Partnership planters, and crouched down there for protection. “Your brain just doesn’t register in a situation like that. It doesn’t happen like in the movies where someone is shot and boom they go down. These people were falling slowly,” he said.