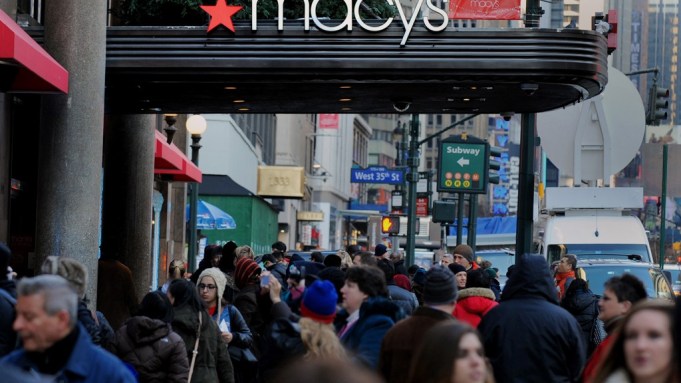 Retailers, malls and Web sites across the country got off to a strong start to the holiday season on Thursday, lifted by consumers jumping on widespread discounts, Thanksgiving Day openings, and clear and cold weather fueling sales of coats, sweaters and gloves.

Online activity surged and self-purchasing was popular. At many Target and Kohl’s stores, there were reports of hundreds of people waiting in line for early openings and sharp discounts. After midnight, teen shopping swelled, as older consumers and their young children called it a night. Markdowns were often in the 40 to 60 percent range, leaving some room for even higher markdowns as Christmas gets closer. Barneys New York offered up to 40 percent off designer merchandise, Home Depot offered the same percent off its merchandise, while Kenneth Cole was up to 50 percent off, and Macy’s showed numerous discount signs in its stores at 50 percent off. It also offered free shipping with purchases over $99.

Retailers also offered sharp discounts online, which is becoming an ever-important component of Black Friday, eating into traffic on the so-called Cyber Monday. Data from PayPal, the online payment service, indicated there was a 114.7 percent increase in global mobile payments over Thanksgiving 2013, compared to Thanksgiving 2012, and that the busiest time for mobile transactions in the U.S. happened between 10 p.m. and 11 p.m., [EST] on Thanksgiving.

“By all appearances and according to ceos I’ve spoken with across the retail spectrum, it looks like the early opening of stores on Thanksgiving and the traditional start of holiday shopping on Black Friday is breaking new records, including what companies are seeing through their digital channels,” said NRF president and chief executive officer Matthew Shay. He said stores were offering more savings through “great promotions in every category.”

NRF estimates that total holiday sales will increase 3.9 percent this year to $602 billion.  Projections from consulting firms and retail experts range from about 2 percent to under 4 percent.

While Thursday’s results were clearly encouraging, they didn’t offset uncertainties about the impact of the earlier hours and the season’s outcome overall. In particular, there are worries that Thursday’s rash of openings and earlier hours might siphon business from the rest of Black Friday weekend, and whether there’s enough momentum for retailers to meet their November-December plans and overcome the short season between Thanksgiving and Christmas. It’s six days less than last year.

“Consumers are more optimistic than a year ago, and it’s at least positive that they plan to spend more than a year ago. The question remains whether they actually carry through,” said Brent Schoenbaum,  partner in the retail practice at Deloitte. Based on its research and the current consumer mindset, Deloitte forecasts a 4 to 4.5 percent total sales gains for retailers this holiday, excluding gas and auto sales.

At Macy’s Herald Square, 15,000 discount-craving consumers stormed the entrances for the 8 p.m. opening Thursday, which was four hours earlier than last year’s opening. Macy’s staff manning the entrances admonished people to stop pushing, to avoid a stampede before the doors swung open, though no incidents were reported. A block away on 33rd Street, J.C.Penney also opened at 8 p.m. and drew decent traffic though it was not nearly as packed as Macy’s. Kmart had some traffic but one associate acknowledged the store could have been busier considering the holiday.

Wal-Mart stores nationally swelled with shoppers racing for time-sensitive deals on electronics; there were a few reports of fights over products and parking spaces. There were planned protests Friday at hundreds of stores by Wal-Mart workers and supporters protesting low wages but the retailer claimed they did not affect business much. It reported a “record-breaking” Black Friday. Top sellers in stores and online were big screen televisions, the iPad mini, lap tops, XBox One, PS4 and “Call of Duty Ghosts.”

“Our Black Friday events were bigger, better, faster, cheaper and safer than ever,” said Bill Simon, president and ceo of Wal-Mart U.S. “More customers chose us, we had the prices and products they were looking for, and we’re not finished yet.” The company said this year it topped the 22 million customers it served on Thanksgiving Day last year, though an exact figure wasn’t released. The giant retailer also said more than five million customers took advantage of the one-hour guarantee which was expanded from three items last year to 21 items this year, and that from 6 p.m. to 10 p.m. Thanksgiving Day, 10 million transactions were processed at its registers. Walmart.com processed nearly 400 million page views on Thanksgiving Day, including customers who used mobile devices and tablets.

While there was a big crunch at Macy’s Herald Square, “I think our team handled it really well,” said Terry Lundgren, Macy’s chairman, ceo and president. “This was the largest crowd we’ve ever seen for any event in front of our doors, but people were smiling, they were in good spirits and they entered in an orderly way.

“We really worked closely with designers and vendors to make sure we had strong values across the store, from men’s outerwear to women’s sweaters to home electrics,” Lundgren said. “There were just great values throughout — Tommy Hilfiger jackets for $79.99, Rampage boots for $19.99 and Kenneth Cole men’s boots for $29.99. They were really obvious values. On some of them, we make very little margin. The mix is what makes it work for us.”

Lundgren said it remained to be seen whether the Thursday night rush would drag business from the rest of the Black Friday weekend. Yet he had no doubts that it was the right decision to open early. “We knew people were ready to shop. If we didn’t open at 8, we would definitely have lost customers to other stores opening early. I’m glad we did. I am still going to predict that the period from 8 p.m. Thursday to 1 p.m. today [Friday] will be the single largest period in Macy’s history.” Lundgren declined to cite the projected volume for the stretch.

Asked what his outlook for the season is, Lundgren said the cold weather, strong third quarter results, particularly in October, and the strong Black Friday kickoff, bodes well for the fourth quarter. “It’s good to have all that momentum, but it’s still going to be challenging,” since the retail market for business isn’t growing. “You have to take market share,” from the competition, he said.

Deloitte’s Schoenbaum spent a lot of hours observing the traffic at the Glendale Galleria in California. He said it had a healthy flow till around 2 a.m. Friday morning, with teen retailers, those catering to people in their 20s, as well as Macy’s and Target drawing the largest crowds. He also said a second wave was noticeable, building up around mid-day. “There’s still traffic to be had,” Schoenbaum, said at 12:30 p.m.

He is among those who believes Thursday’s  openings, and earlier price promoting would impact this weekend and the rest of the season. “It’s pulling traffic out. We don’t see it adding dollars per se. We see more of a spreading of dollars — spending over a longer period of time,” compared to past holiday seasons marked by two rushes- Black Friday and a week or two before Christmas.

From midnight to 7 a.m. today at The Mall at Wellington Green in Palm Beach County, Fla., teens were most in evidence and were predominantly self-purchasing in apparel and footwear stores, according to Taubman Centers, which operates the mall. It opened at 8 p.m. on Thanksgiving. The strongest categories from 11 p.m. to 8 a.m. were teen apparel, electronics, sports apparel and shoes, and home items. The weakest categories were women’s apparel and jewelry.

At another Taubman property, the Great Lakes Crossing Outlets in Auburn Hills, Mich., sales promotions on Thanksgiving Day and Black Friday were predominantly the same. Stores surveyed reported flat sales as of  8 a.m. Black Friday. The strongest categories were fleece apparel, outerwear, athletic shoes, women’s accessories and intimate apparel. As other malls and retailers noticed, Great Lakes saw extensive self-purchasing, with about 50 percent of the crowd buying gifts; 50 percent buying for themselves. From midnight to 8 a.m., the crowd was predominantly teens and young adults under 30.

Simon also reported that Michael Kors at the Dadeland Mall in Miami was very busy from 8 p.m. to 1 a.m. Kors staff took the opportunity in the very early morning hours to restock for the morning rush. Many of the stores at Dadeland reported that they expected traffic to pick up again at around 9 a.m. Before Apple opened at 6 a.m., it had 200 people waiting outside.

The parking lot at Simon’s Mall of Georgia was 90 percent full at 11 p.m. At around 2:30 a.m. traffic began to taper off and a younger crowd descended. At 8 a.m. today  the parking lot was about 65 percent full. The cold weather in Georgia, with temperatures in the 20s and 30s, sparked winter apparel sales, while women’s shoes, particularly boots, continued robust.

Winter wear and fashion accessories topped the shopping lists at Opry Mills in Nashville as well, Simon said, with plenty of international shoppers in evidence. The mall passed out Starbucks gift cards.

Traffic at Opry Mills picked up at 8 a.m. this morning after a drop off at 2:30 a.m. Coach Factory, Polo Ralph Lauren Factory Store, and H&M had the most sustained lines.