A snapshot of what shopping and retail in the Bay Area looks like.

The new normal has taken hold on the sidewalks and in stores in places like San Francisco’s tony Union Square area, just off Maiden Lane, or malls in nearby Palo Alto or Santa Clara.

These days, once-bustling commerce districts face comparatively empty streets and concourses. Lengthy coronavirus shutdowns knocked many retailers back on their heels and decimated others. 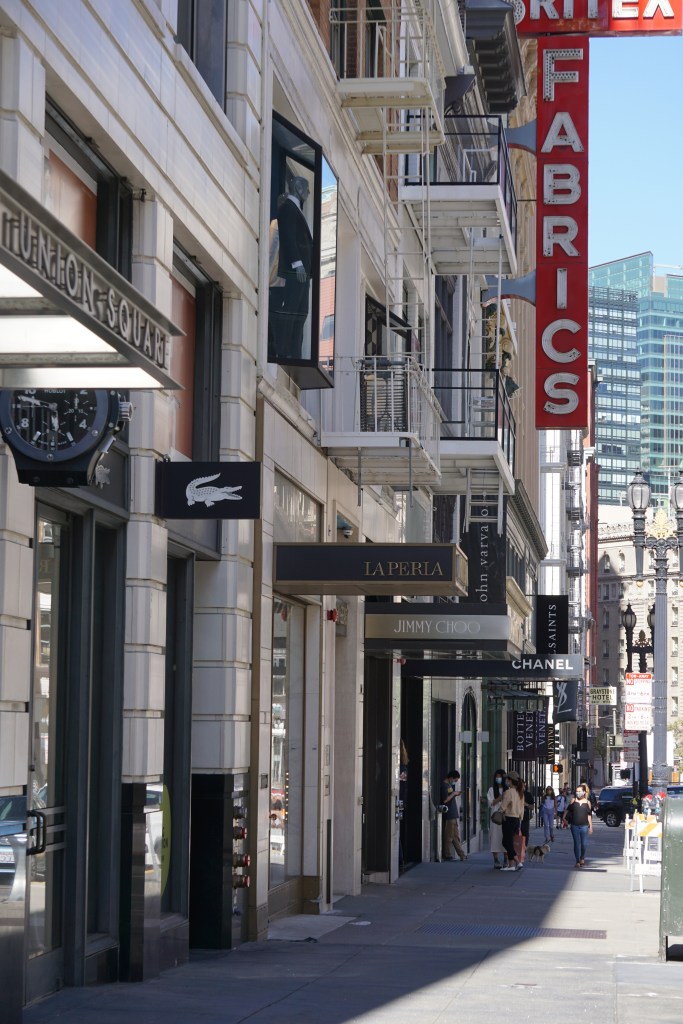 This week brought another crushing blow, at least for some area businesses: Mounting COVID-19 infections in the state prompted California Gov. Gavin Newsom to roll back reopenings for malls, hair salons, gyms, entertainment complexes and other facilities across 30 counties. One of them, Santa Clara, is home to Silicon Valley’s Stanford Shopping Center and shopping mall Westfield Valley Fair.

The restrictions make for a complex matrix of varying retail policies and shopping experiences, even across neighboring regions, depending on the nature of the retail venue and physical locations.

For now, the latest rollback isn’t expected to change things much, if at all, for stand-alone shops or open-air malls. And that may give these workers reasons to hope that recovery isn’t out of reach.

“It’s crazy that this [epidemic] happened,” said Sandy Juarez, a service lead at Burberry at the open-air Stanford Shopping Center in Palo Alto. “But we in retail have faith that things will pick up.” 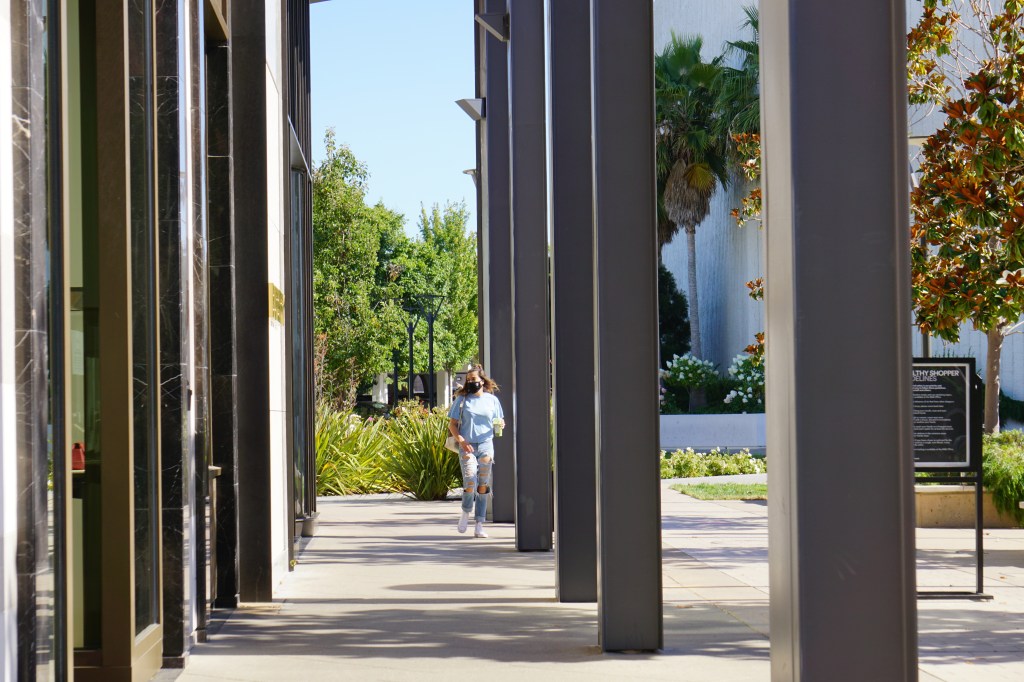 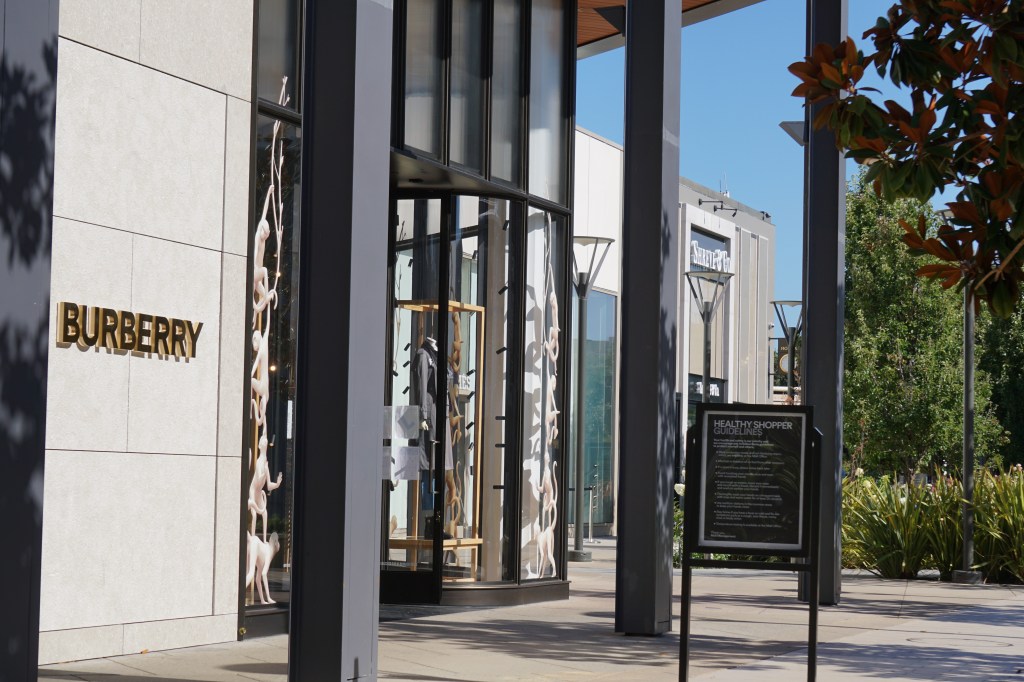 The store benefits to some degree by the popular Apple Store across the way. But traffic is still far below pre-pandemic levels. “You can really tell a difference from a year ago,” Juarez added. “It’s kind of scary.”

The plaza, which some may know as the local extension of luxury retailer Jeffrey before it closed shop, caters to affluent Silicon Valley shoppers. 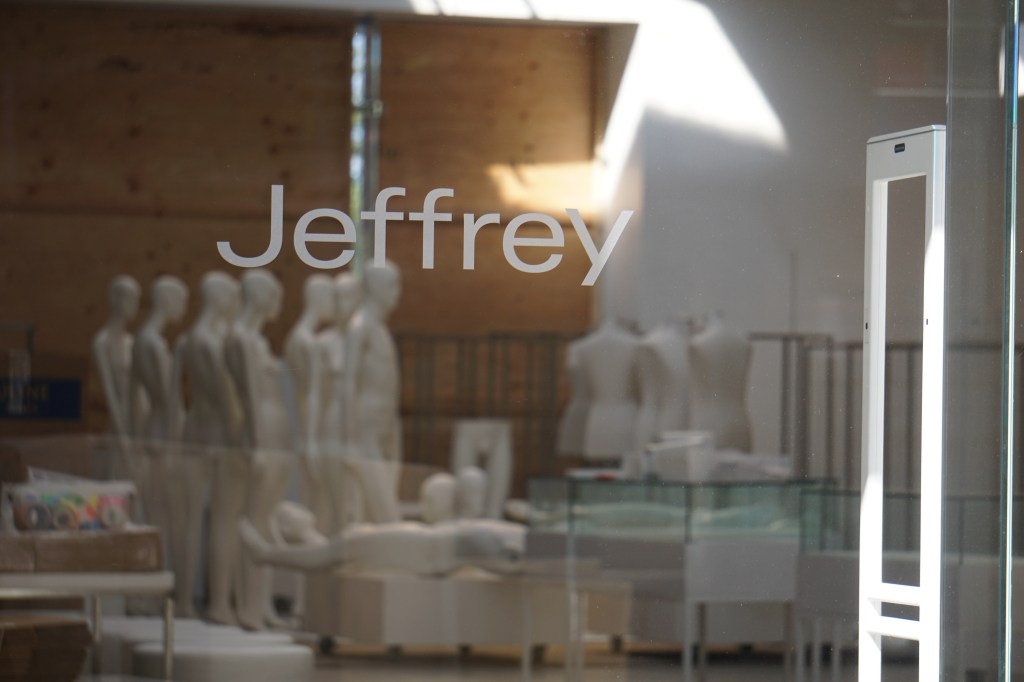 Stores such as Cartier and Hermès have opened their doors, but for appointment-shopping only, while others enforce new maximum occupancy limitations that scale from Burberry’s eight-person limit to Macy’s 929.

During WWD’s visit, some visitors could be seen strolling the walkways, but saturation looked to be far below normal levels, even for a weekday, with sales associates in most stores far outnumbering patrons. On the bright side, it made easy work of following social distancing mandates. 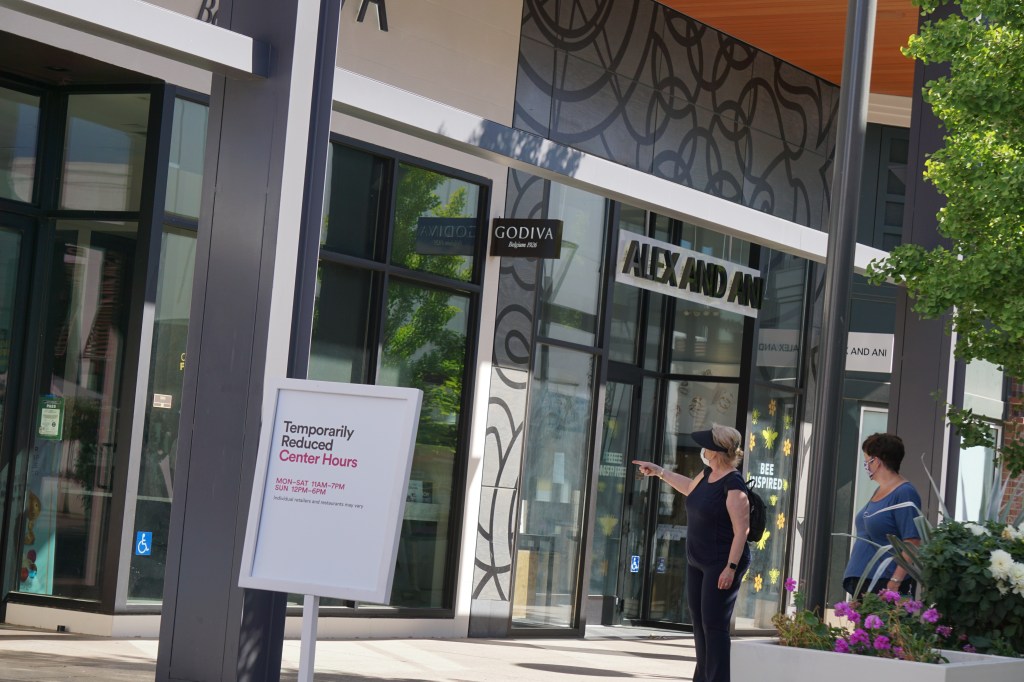 Multiple attempts to reach out to Simon Malls, which runs the shopping plaza, went unanswered. According to one employee, the department that handles press requests was gone, likely stemming from the company’s March decision to furlough 30 percent of its employees. 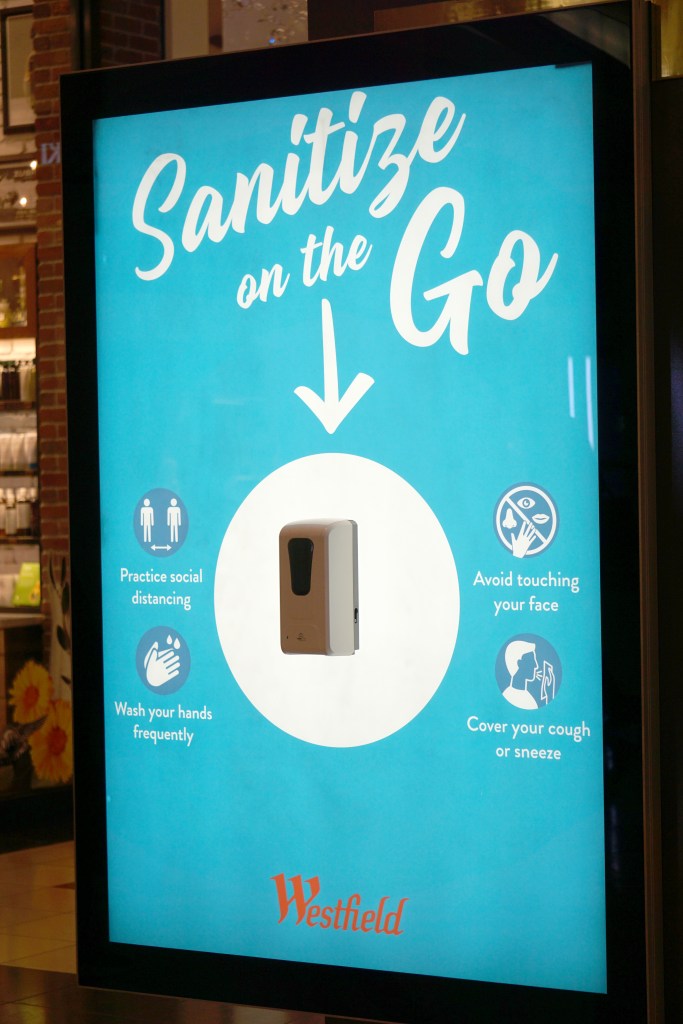 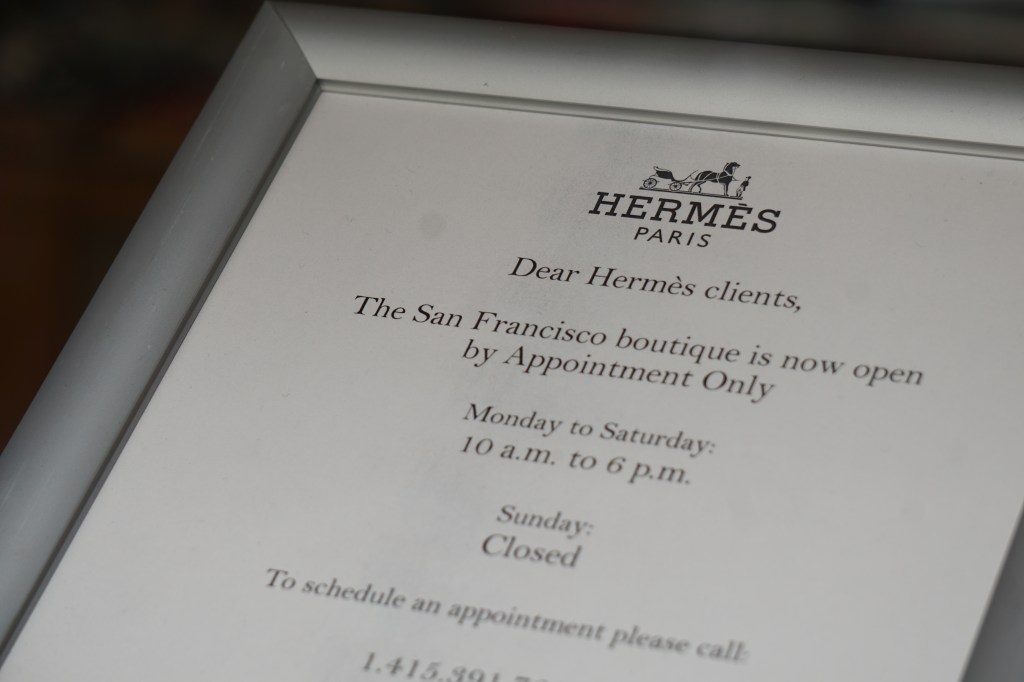 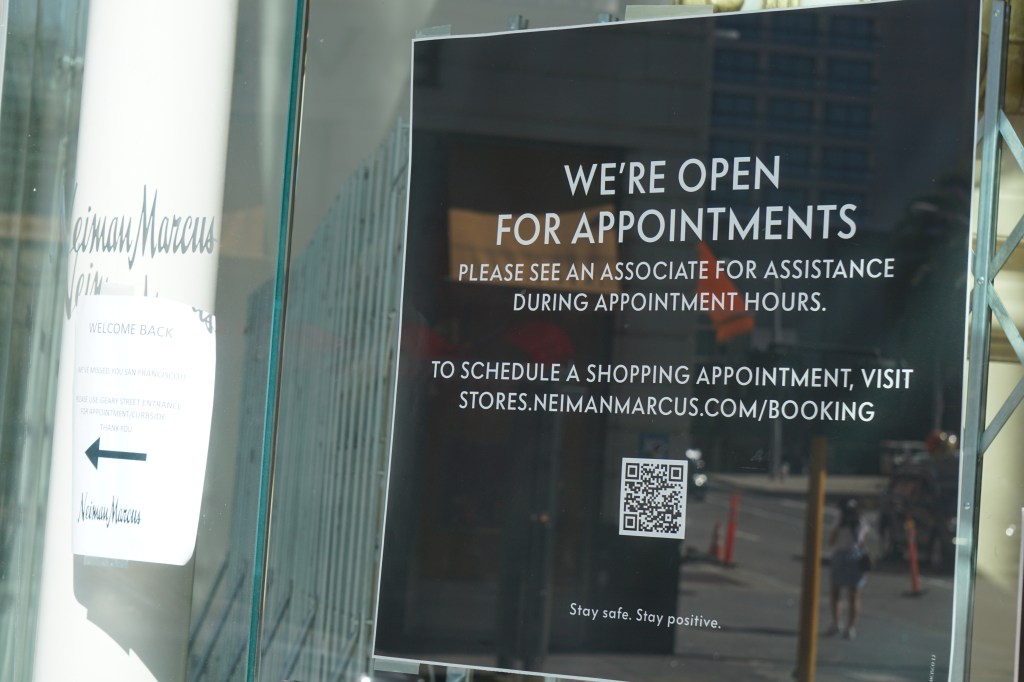 At street-facing San Francisco stores, appointment shopping has become a recurring theme, with Hermès, Chanel, Louis Vuitton and Neiman Marcus, among others urging the public to reserve time slots.

Appointments aren’t needed at Macy’s, which has been trying to appeal to consumers with signage touting “Black Friday” discounts. According to shift supervisor Chris Anders, the idea was to imply a more optimistic “Christmas in July” feel. 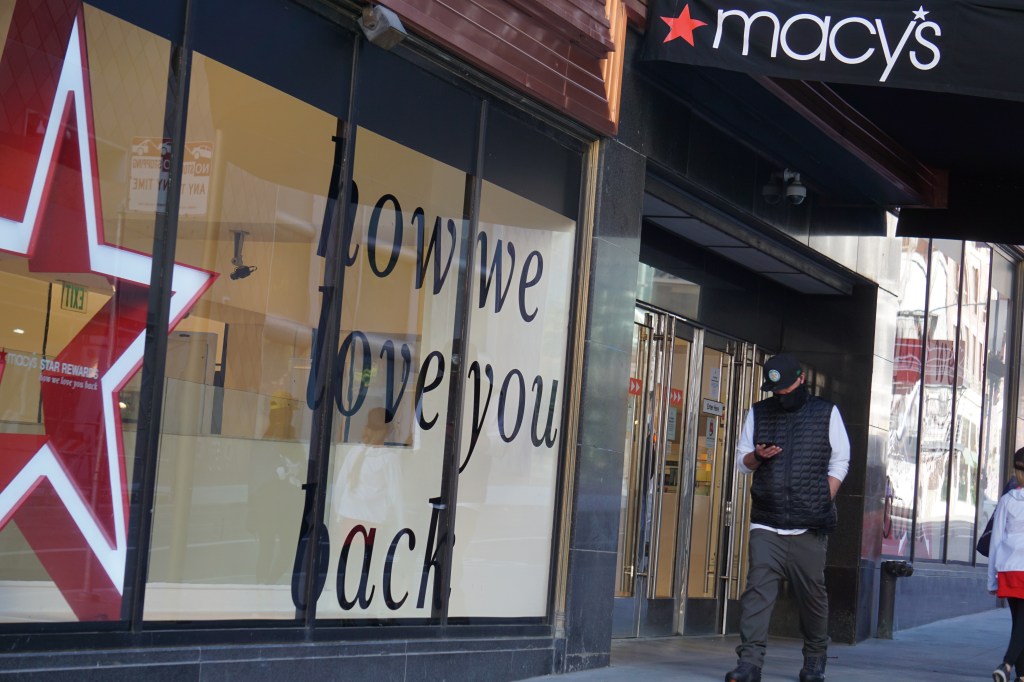 Again, shoppers seem to comply with the department store’s mask requirement, he said, and some customers seem relieved and happy to be able to shop again.

Not that all of the city’s residents are in full compliance with health mandates. When Anders sees people flouting the rules by packing into restaurants and other venues without masks on, he can’t help but seethe a bit.

“It’s two steps forward, three steps back,” he said. “I see so many people doing the right thing, but then there’s that small percentage pushing us back.”

Down the street, small pockets of activity cluster in places, with lines formed in front of stores like Chanel and Louis Vuitton. The latter seems to be a popular destination in and out of the city. Its Westfield Valley Fair location, an indoor mall in Santa Clara, also had a line forming in front — socially distanced, of course. 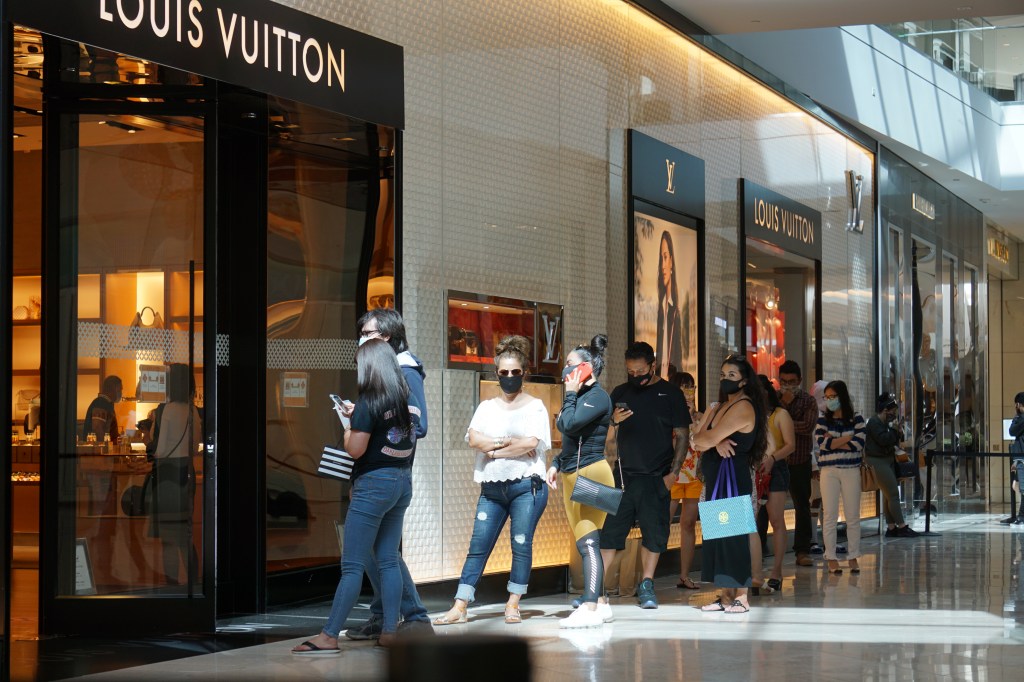 The line in front of Louis Vuitton, Westfield Valley Fair in Santa Clara, Calif. Despite the photo’s angle, shoppers were, in fact, socially distanced.  Adriana Lee

The scene conforms to the mall operator’s safety measures, which include a code of conduct, hygiene guidelines, increased cleanings and rules requiring masks and social distancing. Westfield also announced new services, including a system called Line Pass that lets people join a virtual waiting line, web chats to answer basic questions about safety or hours and designated curbside pick-up zones — though the latter was not available at Valley Fair yet.

The mall’s retailers have been doing their best to promote safe shopping as well, with stores from Prada to Old Navy instituting new occupancy limits of four people and 40 people, respectively.

“Things are beginning to return to business as usual,” a Westfield spokeswoman told WWD on Monday. “Since Westfield Valley Fair reopened, retail sales are up over 50 percent from the same period last year, [and] traffic has continued to increase each week since the reopening.”

But that was before Newsom’s latest mall clampdowns. What happens next will hinge on what the state’s numbers look like now, and in the days and weeks ahead.