Shorts are having another fashion moment. Retailers report they’re experiencing double-digit increases in the category. 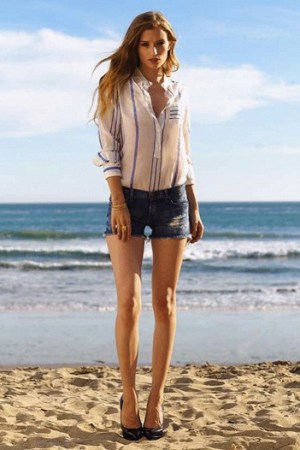 London Reopens for Business — and Fashion Retailers Are Feeling Optimistic

NEW YORK — Shorts are having another fashion moment.

Retailers report they’re experiencing double-digit increases in the shorts category, and it’s not just because the weather has heated up. Shorts have become fashion items, ranging from denim cutoffs to rolled and cuffed twill shorts to belted cargoes and longer, slinky silk shorts for evening.

Bloomingdale’s, for example, is touting shorts as “the summer essential from minis to knee-length” in signage at the entrance of its contemporary department. Across the country, stores ranging from Lord & Taylor, Belk and Saks Fifth Avenue to Scoop, Olive & Bette’s and Chalk Boutique are seeing customers gravitate toward shorts in greater numbers than previous years.

“It’s one of our big pushes. We got them in early and they started off very well,” said Frank Doroff, vice chairman and general merchandise manager for ready-to-wear at Bloomingdale’s. “They’re selling at all lengths, and they’re going to be a hot item this summer.”

While he couldn’t give exact sales projections, he said, “They’re way ahead. We have so much more than last year.”

Some of the brands doing well are Sanctuary, Buffalo and Calvin Klein Jeans, especially in twills and rayons. “The rolled cuffed shorts are working really well. They’re the hottest trend,” said Rodbell.

In denim, shorts from AG and Rich & Skinny have also been strong sellers, she said. “It’s easy to wear the rolled look, and the whole military thing is anchoring it,” she said. She said L&T is also doing well with the cocktail short, “which is softer and more fluid. It’s not big volume yet, and it’s more dressed up. It’s flirtier,” she said. Some of those vendors include 860, Love 80 and BCBG.

Rodbell said women are wearing shorts out to dinner with heels, instead of the skinny jean.

Kathy Bufano, president of merchandising and marketing at Belk Inc., the 308-unit department store retailer based in Charlotte, N.C., said, “We’re having a great short season, from the fashion shorts business in contemporary to the junior short business, which are very short shorts, in beat-up denim and frayed denim.” She also said the khaki trend is happening in rolled styles and cargoes with belts, as well as printed shorts with a paper bag waist.

Among the brands Belk is doing well with in contemporary are Miss Me, Joe’s, World Shorts from Citizen and Seven For All Mankind. “We try to stay under $100,” she said.

“Down south, it starts to get warm March 1. We have a very strong dress-up business for career, but our shorts business is very good. You have to have variety. It’s not just knee lengths,” said Bufano.

She expects the strong trend in shorts to continue into fall. “We always deliver shorts for back-to-school because of our climate,” said Bufano. A large number of Southern states have their students return for fall in mid-August, meaning the weather is still hot.

Some of the shorts, particularly the “super short” cut-off styles, don’t come cheap. Bloomingdale’s, for example, is featuring “super short” denim shorts in the contemporary area from vendors such as AG ($135), Citizens of Humanity ($145); Siwy ($152), and True Religion ($172).

Commenting on the shorts phenomenon this season, Roseanne Morrison, fashion director of the Doneger Group, said she’s finding that “incredibly short” shorts are selling particularly well in denims that are vintage or destroyed. “White shorts have started to do well too,” she said. She observed the shorts trend started out really early this spring. “Everyone was wearing them with tights and leggings and boots, and it was a ‘buy-now, wear-now’ classification,” she said.

She also believes shorts will continue to be strong for fall, especially to be worn with tights. “Boots are really worn all year-round now, and it looks really good,” she said. Morrison is seeing shorts in leathers, suedes and wools for fall. “It looks great with a blazer and a shirt tucked in. It did replace the mini in a way,” she said.

“Casual bottoms as a category are performing well at Saks Fifth Avenue,” added Peter Herink, the retailer’s vice president, divisional merchandise manager of contemporary. “We are seeing a range of success from printed silk versions from Nanette Lepore to linen cuffed shorts from Alice + Olivia to even more casual styles from brands such as Vince, Theory and Splendid.”

Stacy Pecor, owner of Olive & Bette’s, the four-unit New York-based retailer, said, “Our shorts business is up 27 percent over last year.” Denim shorts are driving that increase, and she said she’s having good success with Seven For All Mankind, AG and Citizens of Humanity. She’s also done well with Paige twill shorts.

Olive & Bette’s has seen brisk selling in dressier shorts from Julie Brown, in novelty prints, butterflies and polkadots, for example.

Describing the age range of customers buying shorts, Pecor noted, “We’re selling them to stroller moms, private school girls…across the board,” she said. The denim shorts retail for about $160, she said.

Scoop is experiencing a double-digit increase in shorts this spring. Some of the bestsellers have been Sea’s silk drawstring shorts at $190; Alice + Olivia’s twill and linen cuff shorts for $155; denim roll-up shorts from Seven for around $150, and linen cargo shorts from Splendid for $88.

“It’s a fashion trend. We’re seeing a trend of bottoms, other than denim, that are hip and cool,” said Susan Davidson, chief executive officer of Scoop. She said women are wearing the dressy ones out a night. “I think it’s a replacement for the miniskirt,” said Davidson. She also pointed out that there’s a lot of shoe interest this season “so you want to show them off.”

Chalk Boutique in Evanston, Ill. is having similar success with shorts this season.

“Women are wearing them from day to cocktail occasions,” said Carrie Kane, co-owner of the Chalk boutique. The store is doing very well with Current/Elliott’s denim shorts, as well as Haider Ackermann and A.L.C. by Andrea Lieberman. She agreed the shorts trend started last fall with women wearing them with boots and tights.

Kane noted her customers are also buying the slightly longer looks. “Tuxedo shorts are the second trend in shorts. Fighting boxer shorts are doing well too,” she added. “It’s not completely replacing the dress. It’s definitely an alternative. It’s taking the place of skirts. It’s a new way to dress for cocktails.”

She added, “We are seeing women in their Fifties [buying shorts]. They hesitate at first and then they’re on board. Shorts have a nice drape to them, and with a spectacular shoe…”