HORSING AROUND: Off-Track Betting isn't usually associated with designer fashions. But in a quest to freshen its image and reach a younger audience, OTB is hosting its first equestrian-themed fashion show at 7 p.m. next Tuesday, days... 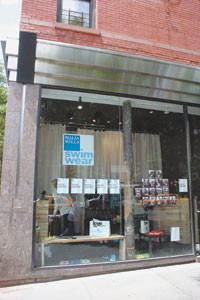 HORSING AROUND: Off-Track Betting isn’t usually associated with designer fashions. But in a quest to freshen its image and reach a younger audience, OTB is hosting its first equestrian-themed fashion show at 7 p.m. next Tuesday, days before the Belmont Stakes, the final race in the Triple Crown, on June 11. Among the firms slated to show their wares are Iceberg, Rubin Chapelle, Seize Sur Vingt, Fred Perry, Earnest Sewn, Dave Denis, House of Diehl, Surface 2 Air and United Nude. The show will be at the Drive-In Studios on West 18th Street in Manhattan.

MALIA MILLS EXPANDS: Swimwear retailer Malia Mills has opened its third store, at West 70th Street and Columbus Avenue in Manhattan. The store has taken over a 300-square-foot spot that was occupied by a flower shop.

“We had a lot of customers uptown who were asking us for a store,” said Mills, who founded the company in 1991.

Top sellers this season include tankinis, low-rise bottoms and brightly colored tops in orange and pink. Most of its separates sell for about $95, and can be mixed and matched.

The firm’s other boutiques are on Mulberry Street, and 74th Street and Lexington Avenue. Jason Pruger, managing director at Newmark Retail, which brokered the deal, said: “This is a growing neighborhood for women’s fashion. Barneys and Theory are close by, and we are seeing more interest from salons and other stores who want to come to this area.”

HURLEY STEPS UP: Converse is making footwear for Hurley that will launch in the spring 2006 season. Both companies, which are subsidiaries of Nike, are collaborating on designs and brand strategies to develop the line, which will include beach sandals, skate shoes and casual styles, as well as a special Hurley-designed limited-edition Converse Chuck Taylor All Star style. Wholesale prices will range from $8 for sandals up to $35 for skate and dress shoes.