The Place London for Men showcases the new brand Leathersmith of London. 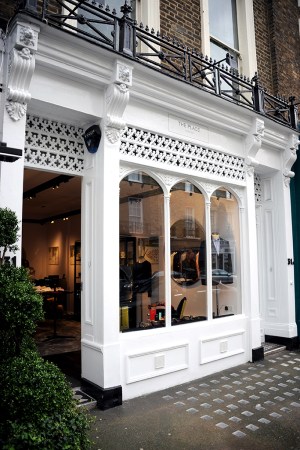 The men’s store is two doors away from the women’s, with an upscale Persian restaurant in between. It mostly stocks clothing and accessories from the brand Leathersmith of London, which Burstein bought last year.

Leathersmith was a leather and stationery brand that started life at the Charfleet Book Bindery on Canvey Island in Essex. Burstein also bought the bindery, and has ambitions to turn Leathersmith into something bigger.

“I want to take Leathersmith into a lifestyle environment, and reveal its secrets and talents as a stylish British contemporary men’s wear brand,” said Burstein, who has retail in bones.

“I’m not deluding myself. I know it’s going to be a long journey, but I think consumers are always inspired by authenticity. I’m attached to this brand and have worked hard to preserve it,” added Burstein, who discovered Leathersmith more than 15 years ago at Fortnum and Mason.

Burstein said he opened the second store in order to consolidate his presence on the street. Located in the heart of the neighborhood known as Connaught Village, Burstein’s stores are a few minutes’ walk from Marble Arch and Hyde Park.

His neighbors include the cult bakery Cocomaya; women’s labels Me and Em and Kokoro; footwear boutique Lucy Choi London, as well as a cheese monger, patisserie, coffee shop and a string of restaurants.

Burstein has extended the label to include printed ribbed socks; fine gauge knits; cotton trousers in colors like coral, mint and robin’s egg blue; a lineup of gingham and plaid summer shirts, and lightweight jackets, some with contrasting elbow patches, others done in corduroy for the London summer.

He’s adamant that the offer retains British flair and said his collection is “spot on for now.” He has no plans to mark anything down. “And I’m not opening fall until the beginning of September. There is no reason to do it. These are timeless pieces.”

The clothing is produced mostly in Portugal, while the leathers and notebooks are done at the original bookbinder in Essex. The store will also have its own embossing machine offering a personalization service for wallets, notebooks and a gentleman’s briefcase.

Although the store is really about the new Leathersmith, a few other brands are also stocked, including sturdy and sporty cotton bags by Brady, all of which are handmade in England, and jackets by the Brussels-based Sofie D’Hoore.

Burstein’s family founded the London specialty retailer Browns in 1970 (he was the one who originally pushed his parents to buy the store) and sold it to Farfetch.com in May 2015. He most recently served as its chief executive officer, and has run various retailers.

He’s also risked his time and money on smaller brands, such as the young London designer Alice Archer, whose clothes are sold at The Place. His 90-year-old mother Joan Burstein famously launched and nurtured young labels including John Galliano, Alexander McQueen and Hussein Chalayan, and introduced international ones, such as Donna Karan, Ralph Lauren, Giorgio Armani and Missoni to the U.K. market.

Not surprisingly, more stores may be in the pipeline: “I have New York and Paris in the back of my mind,” he said.