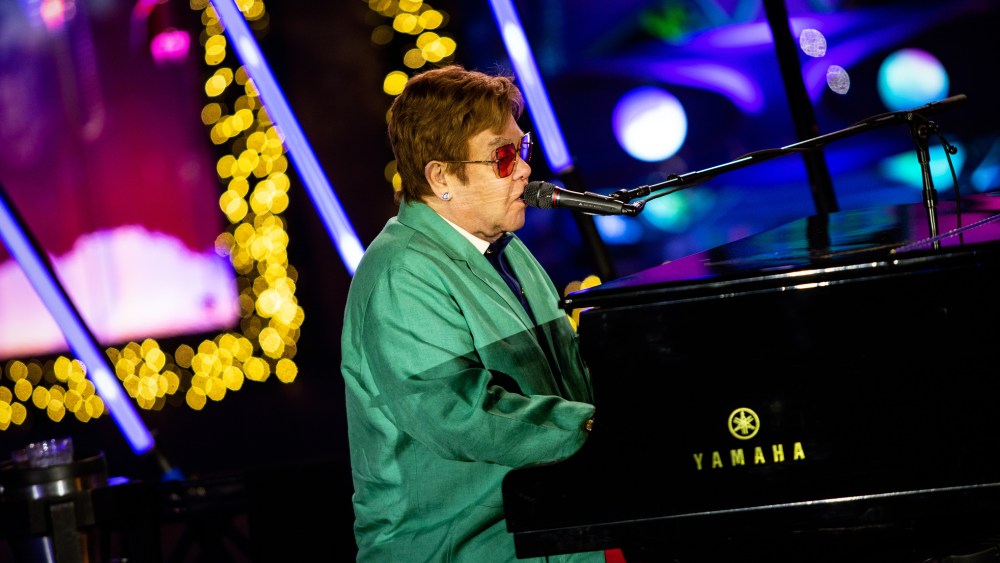 Sir Elton John literally stopped traffic Tuesday night as he performed in the middle of Fifth Avenue in New York — which was closed down between 49th and 50th Streets — for Saks Fifth Avenue’s holiday window unveiling and light show.

John was driven in a purple golf cart to his grand piano, which was rolled out to the center of Fifth Avenue at 7 p.m. Wearing a teal jacket, red track pants and his signature red-tinted glasses, John said, “Good evening New York. Thank you all for coming, and to Marc Metrick [chief executive officer of Saks Inc.] for setting up this incredible evening and most importantly, thank you for your $1 million [donation] for Elton John Foundation Rocket Fund, which will help turbocharge our mission to end AIDS, and it means a great deal to me to have your support.”

John then introduced his husband, David Furnish, and two sons, Zachary and Elijah, as they counted down together while the whimsical, brilliantly colored windows were unveiled. John then performed one number, “Your Song,” to the invite-only crowd, who were seated in the bleachers across the street. Afterwards, John joined his family in the audience and watched the light show, which included a medley of his hits, followed by fireworks exploding above Saks.

Before John’s performance, Metrick warmed up the crowd, joking, “So now I’m going to sing.…It’s great to have so many friends and family and our partners with us tonight to kick off the holiday season. We see our windows as our gift to New York City, a city we call home.”

Metrick spoke about the $1 million gift to the Rocket Fund, “which goes to end the stigma to AIDS and HIV,” and provides treatment to the most vulnerable groups affected by AIDS. He also thanked Saks’ partner, Mastercard. “Let’s light up the night,” he said, turning over the festivities to the window unveiling, light show and John.

Prior to the ceremony, Saks hosted a cocktail party at The Vault at Saks, which was attended by such people as Prabal Gurung, Jason Wu, Fern Mallis, Jeffrey Banks, Samantha Barry, Laura Kim, Alexandra O’Neill, Julia Loomis, and NBC’s Stephanie Ruhle.

Many spoke about their upcoming Thanksgiving plans. Gurung, for example, said he’s spending Thanksgiving with his mother who lives in his building “and is an amazing cook,” while Ruhle said she and her son were heading to Fort Myers, Florida to do Hurricane Ian clean-up work.

When Metrick was asked why he selected John to perform this year, he replied, “Why not?”

“Every year the team really goes out and wants to do something as exciting as they can. This year they just topped themselves. He’s fashion, he’s right at the zeitgeist, he’s in the middle of it all,” the CEO said. “The foundation is very important to him, and it made a lot of sense for us to partner with him. It’s such a great cause and it means a lot to so many in our community.”

As for his Christmas outlook, Metrick told WWD, “We’re just kicking it off now. What’s exciting is this is the first Christmas, [while there are still] supply chain concerns and COVID-19, this is everyone’s first holiday season back. What I’m excited about is people are traveling and going out and going to parties. Ready-to-wear is looking good, statement outerwear pieces are looking good and people really want to dress up.”

Discussing whether he expects the stores will be heavily trafficked or there will be more business done online, Metrick replied, “I think it will be the right balance. Luxury always has a little of both. No matter how people talk about not liking their holiday shopping, they want to do it and touch it and feel it and be part of it.”

John, who just completed his final “Farewell Yellow Brick Road” tour on Nov. 20, welcomed the opportunity to have his family be a part of the event. “I’m honored Saks Fifth Avenue invited my family and me to be a part of this special celebration, and I’m particularly appreciative of Saks Fifth Avenue’s support of the Elton John AIDS Foundation’s Rocket Fund in its mission to end the AIDS epidemic,” he said.

In addition to the $1 million donation to the Rocket Fund, the partnership includes a curated multivendor merchandise collection, dedicated holiday window displays at the Saks flagship in New York, two Saks Live events and editorial content across its digital platforms.

Customers can shop the collection and read about it in The Edit, the Saks editorial hub for fashion news and style inspiration. Saks’ $1 million donation includes $500,000 of proceeds from the merchandise, regardless of sales. The collection is co-curated by Saks and Sir Elton John and features products across all categories including women’s and men’s ready-to-wear, accessories, kids, beauty and home. More than 60 designers are participating, including Gucci, Versace, Valentino, Wales Bonner, Jonathan Adler, Jason Wu, and Paco Rabanne.

Saks is showcasing looks from the multivendor collection with three dedicated windows on 50th Street at the flagship. Gucci, which was John’s exclusive costume designer for his final tour, “Farewell Yellow Brick Road,” has a bespoke window. The display features archival looks from the brand that can be seen exclusively at Saks Fifth Avenue, including custom-made suits for John.

Both John and Furnish, chairman of the Elton John AIDS Foundation and CEO of Rocket Entertainment Group, are participating in Saks Live events to discuss the foundation’s mission, the importance of giving back during the holiday season and their collaboration with Saks.

On Nov. 29, Furnish will chat with Versace’s chief creative officer, Donatella Versace, about fashion and philanthropy, and on Dec. 6, John and Gucci’s creative director (though he is said to be leaving that job) Alessandro Michele, are expected to discuss friendship, collaboration and commitments to philanthropy with a focus on the Elton John AIDS Foundation, moderated by Furnish. A Saks spokeswoman said Wednesday the Gucci event is confirmed.

“I’m excited to collaborate with an iconic brand like Saks that is going the extra mile to make this world. brighter, more accepting place this holiday season and beyond,” John said. “While it’s the happiest time of the year for many, we mustn’t forget about the billions of people around the world for whom safety, respect and dignity are not guaranteed. Saks’ generous support of the Elton John AIDS Foundation’s Rocket Fund will help fuel our programs to bring an end to the stigma and discrimination that prevent so many people from accessing compassionate and life-saving HIV care.”

The Rocket Fund is a transformative $125 million campaign to eradicate AIDS by 2030.

Saks’ holiday windows and light show will be on view until Jan. 3. For the first time, the light show has dynamic lighting displays that illuminate from within the windows and coordinate with the light show in the building’s facade. With new LEDs and more than 600,000 individual points of light, the experience is more colorful, vibrant and immersive than ever. The light show features a holiday medley of John’s songs including, “Step Into Christmas, “Cold Heart PNAU Remix,” “Your Song” and “Merry Christmas.”

The six center windows on Fifth Avenue are inspired by holiday gifts from years past and the partnership with the Elton John AIDS Foundation. The whimsy and brilliant colors of the windows and nostalgic games — including rocket ships and kaleidoscopes — are inspired by John’s personality.