Conceived by Tobia Scarpa, it was presented the first day stores were allowed to reopen in Italy after the lockdown.

The new Sisley store in Treviso

Stores in Italy reopened on Monday, as the lockdown to curb the coronavirus infection is gradually eased, and Sisley unveiled a new concept in Treviso “signaling a new phase, a restart, albeit cautious, but one that inevitably will bring us back to the habits we had given up,” said brand manager Paolo Battacchi.

The store opening, which marks a repositioning of the Sisley brand, owned by the Benetton group, was planned for early March but postponed during the lockdown.

Sisley, launched in Paris in 1968 with a denim collection, has been controlled by Benetton since 1974. Over the past few seasons, the group has been revising it with a stronger identity, positioned in the “contemporary casual chic” and accessible range, or bridge, said Battacchi, and strengthening the bag and shoes categories.

The store was designed by longtime Benetton collaborator architect Tobia Scarpa as a sort of an experimental laboratory, playing with the use of multiple mirrors, a graphic interpretation of the logo, lights and the contrast of white, black and dark red. Rather than employing mannequins, Scarpa designed bi-dimensional silhouettes, each different, personally painting the faces by hand, adding an artistic touch to the items, Battacchi noted. 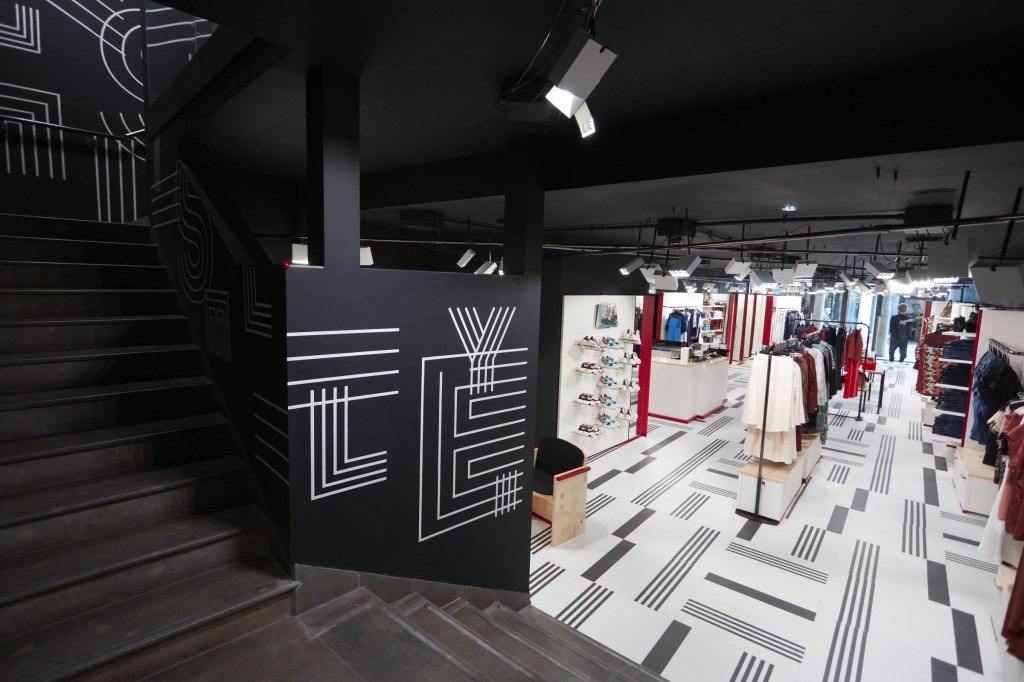 Inside the new Sisley store in Treviso.  courtesy image

Scarpa designed Benetton’s first plant in 1965 and restored the Villa Minelli headquarters among others. After recovering the former Treviso courthouse, which is now the headquarters of Benetton parent Edizione and the former prisons that host chairman Luciano Benetton’s art collection Imago Mundi, Scarpa is working on a project for the restoration of the Santa Maria Nova church in the city, which will become a museum dedicated to his father, architect Carlo Scarpa.

By the end of the day Monday, visits to the store confirmed Battacchi’s earlier comments on how he expected customers to do less browsing and more purchases. He also said he planned the brand to extend the spring collection’s shelf life and to postpone any possible discounting.

The store covers 3,240 square feet, which is double the usual size of Sisley stores. “This clearly helps at this moment of social distancing,” said Battacchi, noting the unit will display only one or two items per model. “When a customer will try it on, it will come from the storage room, and sealed in cellophane. Before the piece is stored away, it will have to be vaporized at 100 degrees and quarantined for 36 hours after a customer has tried it on. We have tested the vapor on different fabrics and materials and did not have problems. We need to re-create confidence and ease in our customers, I see no alternative in this phase.” There will be two employees per floor, he said.

Sisley reported sales of 150 million euros last year and Italy accounts for about half the amount. Its distribution network comprises 250 stores, of which 20 directly operated, and 100 multibrands.

Women’s wear account for 70 percent of sales and men’s wear for 30 percent. South Korea is the second most important market, representing 30 percent of revenues and counting 100 points of sale in main department stores.