SHANGHAI — At the point where social media and e-commerce intersect, China is leading the way.

China isn’t only home to the world’s largest e-commerce market – with sales hitting $672.01 billion in 2015, according to eMarketer – but is also the world’s most-developed social commerce eco-system.

Rising simultaneously with the country’s e-commerce boom has been mobile phone culture. New figures released by the China Internet Network Information Center revealed that as of December 2015, the number of Chinese people using the Internet had reached 688 million — an increase of 39.51 million compared to 2014 — with 90.1 percent of those “netizens” getting online via their cell phones.

The country’s unique digital make-up, as well as a consumer culture steeped in a lack of trust driven by a prevalence of counterfeit goods and a never-ending parade of product safety scandals, have been major drivers behind the trend.

“China is the leader in social commerce because in China you can actually do social commerce. If you go on Facebook there’s not a ‘buy’ button. In China, if you go on WeChat, anything you look at, you can click and buy,” said William Bao Bean, the managing director of Chinaccelerator, a mentorship-driven seed-funding program that has invested in 22 China-based social commerce enterprises in the past 13 months.

“I would say WeChat and some of the other Asian platforms are 12 to 15 months ahead of Facebook. If you look at Facebook’s future product road map, it’s basically a WeChat clone. The commerce element on Western social media platforms is just not there yet,” he added.

Alex Misseri, Razorfish’s head of retail for the Asia-Pacific region, agrees that the digital landscape in China has been a major factor for the natural embrace of social commerce here.

Misseri pointed out that the leading digital companies in China — Baidu, Alibaba and Tencent, known colloquially as the BAT — have come at social commerce from different angles, but have all been quick to move into the space and innovate.

“Both sides realized they needed more of the other, social and commerce; both have started heavily investing in consumer journeys,” he said. “When in the B2C e-commerce space 80 percent of the business is done by one company, that company sets the rules and the standards of the sector. Now Alibaba has a lot of initiatives to add social elements to their e-commerce and Tencent is looking to add e-commerce to their social space and social tools.”

According to Patrice Nordey, chief executive officer of Shanghai-based digital inception agency Velvet, there are three distinct elements of social commerce in China: the research and recommendations from key opinion leaders and online networks; the actual purchasing taking place on networks that were traditionally pureplay social, and the sharing of goods that have been purchased with social networks. All three of these behaviors are particularly well established in China.

“They are starting from the last part of the product journey, with recommendations from people who have already purchased products reviewing their shopping experience,” he said. “It’s about trust and how to find trustworthy sources online. This has been happening in China since the start of the Internet. In Western markets, perhaps 10 percent of people will go online to share their purchases, but in China that number is closer to 40 percent.”

The most active users on social media in China also tend to be the most desirable consumers in the country, middle- and upper-middle-class people with good jobs who are turning to their social networks for advice about how to spend their money.

As the first real generation of wanton consumers in China, these thirtysomethings can’t turn to their parents for advice about what to buy and are distrustful of organizations in general, according to surveys conducted by Razorfish.

Alongside the major players, who have already integrated social commerce in significant ways, there are a number of new apps popping up in China in order to meet the demand for advice, commerce and a place to show off new purchases in one place.

One of these start-ups is RED (the company’s preferred English name; it’s known in Chinese as Xiao Hong Shu, or Little Red Book), which raised more than $10 million in its Series B round of funding in 2014 and is gaining attention because its specialties — buying imported goods from overseas and then telling other people what you have bought on social media — are both major trends among their target demographic of young, urban women.

“Young women in China have two hobbies: one is shopping and the other is sharing. They have a tendency to share whatever they have bought,” said Elaine Lou, RED’s vice president and head of e-commerce.

The platform started life as a bulletin board service in 2013, where shoppers traveling overseas would post about their experiences, the brands they had discovered and products they had bought.

“At that time, Weibo activity was declining and the other option for most people was WeChat moments [a newsfeedlike function on the popular messaging app], but you might have your boss or your colleagues on WeChat, so it might not be appropriate to share what you have bought. We were a natural outlet for users to share what they had bought with like-minded people,” Lou added.

In 2014 a confluence of factors, including demand from users who liked the products they were seeing but didn’t know where to buy them as well as the opening up of China’s free-trade zone enabling easier imports and customs clearance of products from overseas, led Red to expand from a purely social network into a social commerce platform.

The app currently has 18 million registered users, 80 to 90 percent of whom are female, according to Lou. Their most recent reported sales revenue is 700 million yuan, or $106.3 million, in the six months to September 2015.

“In the past cosmetics has been the most popular segment, but now fashion is really taking off. We only really launched the fashion category three months ago, and we are still building the supply chain, but when we run promotions now, fashion is such a popular category,” Lou said.

Bao Bean believes that the fashion category in particular is a natural fit for social commerce in China simply because it’s an area where brand stories and recommendations are particularly important. In other words, fashion has obvious storytelling potential.

“Where it came from, who designed it, who has worn it before — there is a story there. People aren’t buying it because of the color or the cut; they buy something because trusted friends have recommended it and they can access this story. The evolution we are seeing in China is the ability to leverage opinion-leaders as advocates to drive significant sales,” he said.

These opinion-leaders have become even more important as sales drivers in recent years as China’s mass media has fragmented. As Lou pointed out, Red’s young, female demographic once went to magazines such as Cosmopolitan or Elle to help them decide what to buy next season. But the change in consumers’ trusted advisers has resulted in a change in the kinds of brands and products they are seeking out.

“The mass media served big brands very well. Who paid for the advertisements in those magazines? It’s groups like LVMH Moet Hennessy Louis Vuitton. That’s why those years were the golden age for those big brands,” she said. “The post-Nineties generation [as Millennials are often called in China] has much more fragmented interests and they don’t like the same brands as people who came before. That’s what makes our content so valuable. This is why the social part is so powerful — our community is becoming like a dictionary for shopping for young consumers.”

As for the potential for luxury brands to access the popularity of social commerce in China, Alex Misseri believes, despite the higher-end sector traditionally being slow to embrace e-commerce and concerned about replicating offline service standards and luxe experiences in an online setting, now is the time to act.

“Few companies have yet to start thinking about any social commerce initiatives at all, but a lot of companies are still hesitating on what, how, how much, when to do things,” he said. “It’s fine to take a step back and plan and not rush into action, but if you want to be a market leader in one, two, three years time, in some cases even to still be here, to still be relevant in the marketplace, it needs to be done now.” 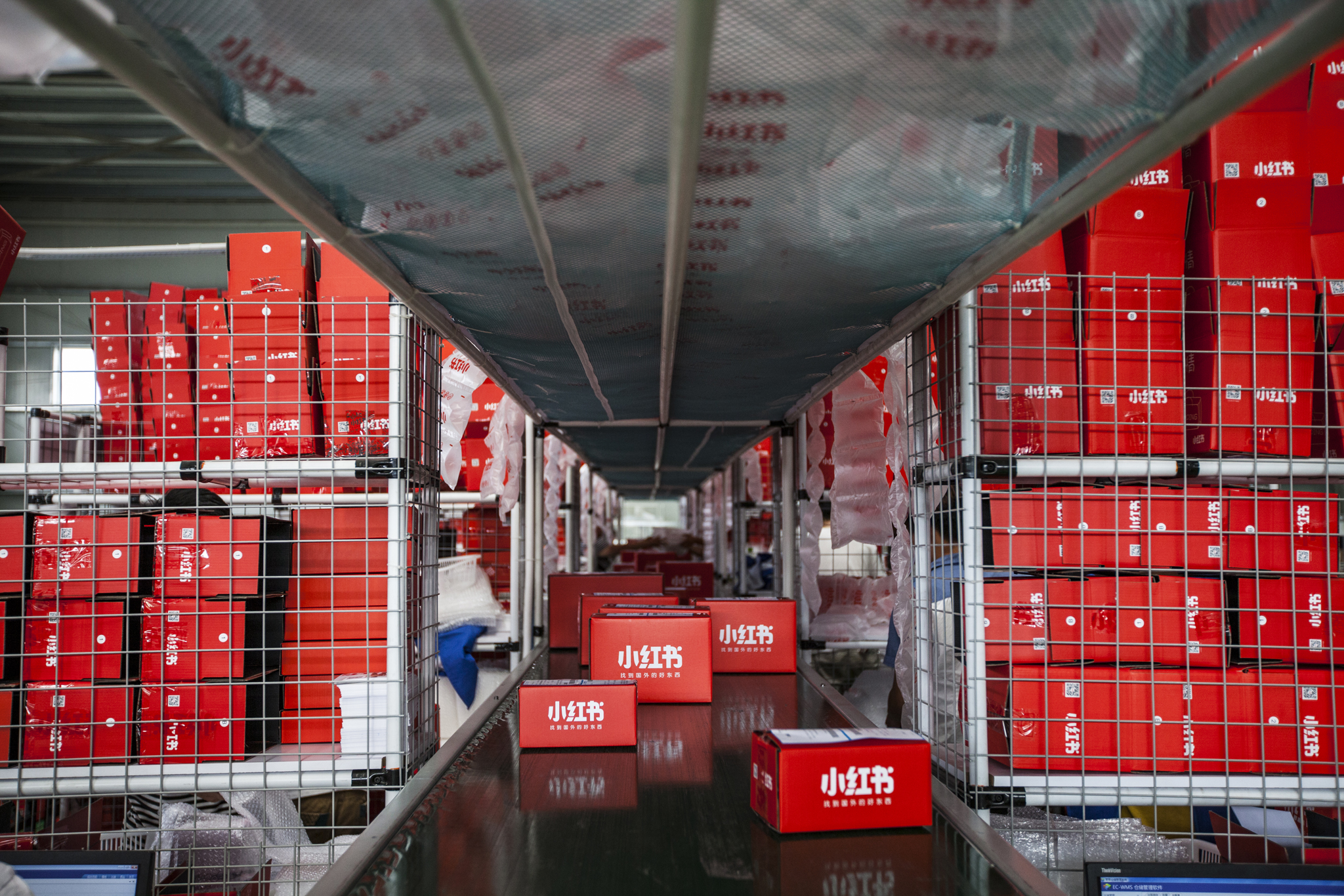 A visual from Red, a Chinese social e-commerce startup.