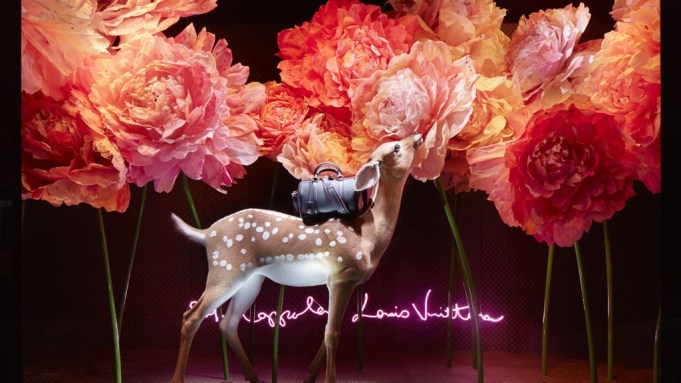 PARIS — Le Bon Marché has tapped director Sofia Coppola to design its windows to mark the launch of a new version of the SC bag she originally designed for Louis Vuitton in 2009.

The 10 windows, on display until Oct. 26, feature pink neon hearts, oversize cherries and giant peonies set against the background of the Louis Vuitton monogram. Statues of baby deer carry versions of the SC bag in its new, compact BB size.

“I wanted it to be fun and feminine and to think of the bag as a present or a treat that you get yourself,” Coppola said in an interview. “It reminds me of Christmas, seeing the windows, so [I wanted to do] something that kids would enjoy too.”

The project marks the first foray into window design for Coppola, whose Paris apartment is near the department store. The stylish director, who has two daughters with her husband Thomas Mars, lead singer of the French band Phoenix, said she particularly likes buying groceries from the Grande Epicerie section.

Coming on the heels of “The Bling Ring,” her movie about a gang of teenagers who gained fame for robbing luxury items from the homes of Hollywood celebrities, the Bon Marché window displays highlight a more playful side of Coppola.

“I think there’s always been this side of my personality, but maybe I didn’t show it before,” she mused. “But I felt like after my film ‘Somewhere,’ [which] was more subdued and minimal, that it was fun to do something kind of the opposite.”

Louis Vuitton is producing the SC bag in a new range of colors. In addition to black and off-white, the small SC bag is now available in cherry, purple and tan. The smaller BB, which comes with a long shoulder strap that allows it to be worn across the body, comes in violet, clementine and duck blue.

From Oct. 1, Le Bon Marché will offer an exclusive limited-edition version of the SC bag in dark cobalt calfskin with fluorescent fuchsia edges applied by hand. It will retail for 2,420 euros, or $3,275, for the small version and 2,820 euros, or $3,800, for the BB size.

Coppola said that when the SC bag was initially launched, she never expected it to become a staple of the French luxury house’s offer.

“I just thought it was kind of a small project, something that I wanted and maybe, you know, a few of my friends, so it’s been really fun to see it grow and then get to be able to make it in new colors and new variations,” she said.