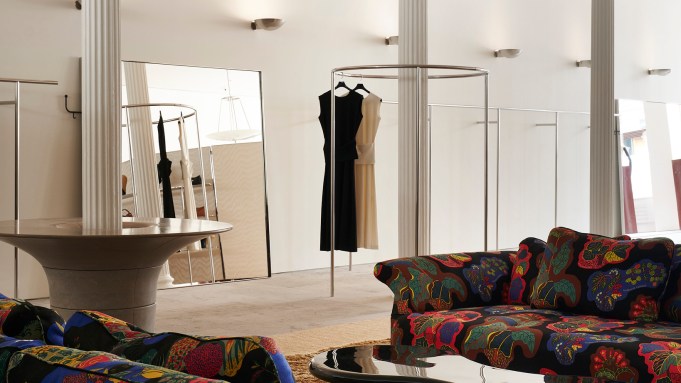 The 3,400-square-foot store opens Thursday at 49 Mercer Street and is set in an 1870s cast-iron columned building with tall windows and a loft-like ambiance typical of the area’s architecture. It’s merchandised with restraint for a spacious, gallery-like feeling and ease of shopping, and furnished with eccentric fabrics and furniture designed by Josef Frank from the interior design company Svenskt Tenn. Alongside Toteme’s collections is an exhibit (for display only) of Svenskt Tenn’s signature pewter objects.

“SoHo is so special. We wanted to keep that sense of space and character and we also wanted to reflect our signature codes of the brand and Swedish heritage. Everything here is designed by us or they’re Swedish design classics,” said Karl Lindman, cofounder and chief brand officer of Toteme, referring to the store’s interior.

From the fashion perspective, “We definitely have a very Scandinavian, soft, warm minimalist approach,” said Elin Kling, Toteme’s cofounder and creative director, and the wife of Lindman. “Our customers come to Toteme because we have a strong design point of view. She can come to Toteme and update her wardrobe. The look is trans-seasonal.” It’s about wardrobe building over time and being able to wear styles of four or five years ago that still work, Kling said.

“It’s a utilitarian approach to dressing. It needs to have a purpose,” added Lindman.

Asked who the Toteme audience is, Lindman replied, “We don’t like to put it into a target group, but I would say our average customer is a young professional, with an average age of 35.”

Though based in Stockholm and Swedish in design and character, the company was started in New York where Lindman and Kling arrived years before for jobs in publishing, communications and advertising. “We started the business online and wholesaling, but the goal was always to one day have a physical space in New York,” said Lindman.

Of the company’s $70 million in retail sales last year, the majority is generated through e-commerce from customers around the world, in particular China, Japan, Korea, and the U.S., as well as Sweden and other European countries. Lindman said the business is profitable, with a 28 to 29 percent profit margin last year. “We have never been out there screaming our name,” said Lindman. “The business has grown organically, friend to friend, word of mouth. We have communities in cities that are drawn to our collections and aesthetic.”

Aside from the SoHo store, there’s a freestanding store and a shop inside a department store in Stockholm, and a store in Shanghai, where a second freestanding unit is scheduled to open in September. Bergdorf Goodman, Saks Fifth Avenue, Nordstrom and Kirna Zabête are among the wholesale accounts.

“We have a good customer base in California so I think Los Angeles is clearly a market where we see potential,” Andersson said. “We already have a substantial online business there. San Francisco is also a possibility. And we can also see another store in New York at some point.”

From the studio in Stockholm, the Toteme design team creates women’s ready-to-wear, shoes, bags and accessories, produced primarily in Italy, Portugal and China. For the fall, a small line of leather bags is being introduced, and soon the company’s first app will launch.

“Our collections are very edited,” Kling said. “We try to keep the number of skus down. Maintaining that authenticity is very important and we want to be able to sell full price.”

“It is contemporary, but always with a twist,” said Lindman. “Our customer looks for styles that have always been there, but we add our touch to it. We’re certainly following our own path. For example, what would a perfect Toteme trenchcoat be like? The trench coat always existed, but the way we cut, it becomes ‘our’ trench coat.”

He said the company has found its “sweet spot” on the fashion spectrum. “She’s a young professional who loves fashion but not living for fashion. She wants advice, a sense of curation. She’s coming to Toteme to find inspiration on how to dress for everyday life.”

Though neither Lindman nor Kling had experience running a fashion company before starting Toteme, Kling did work in fashion communications and publishing, and Lindman’s background is in art direction and luxury branding, and he’s a former design director at Interview Magazine.

“We understood that we couldn’t do everything. We had to meet people, talk to people, convince them to help and work with us before we had a team of designers,” said Lindman. Now there is a design team, led by Kling.

They decided to call their company Toteme because, as Lindman said, “It conveys the idea of community, connecting people and designing for a purpose.”