Starting with shoes, the Los Angeles-based online shoe retailer aims to build a lifestyle brand around the dancer, singer and actress. 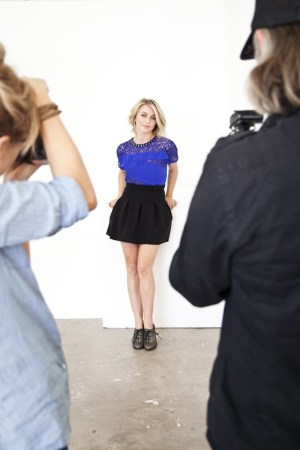 This story first appeared in the November 8, 2012 issue of WWD. Subscribe Today.

Hough’s footwear collection for Sole Society will launch in February at the Los Angeles-based online shoe retailer and select Nordstrom stores with five to six styles, including pumps, flats, wedges and sandals priced from $49.95 to $99.95, followed by infusions of new pairs monthly. Before the collection launches, Hough made her Sole Society debut with a page on Sole Society’s Web site dedicated to discussing her style and favorite Sole Society shoes.

Hough, who is a spokeswoman for Guthy-Renker’s Proactiv but has never previously endorsed a fashion brand, was familiar with Sole Society when they approached her about a partnership. “I had first seen them online and had bought their shoes because I thought how cute they were. I would get them for my sisters, too,” she said. “Then, when we talked, it was a perfect fit. I have been wanting to not only start a shoe line, but also a lifestyle line for clothing.”

Hough views the leap into fashion as an expression of creativity, saying, “It is the reason I do what I do now. With movies, singing and my charity, it is the same reason.” Speaking specifically about why she chose to develop footwear with Sole Society, she elaborated, “I feel like not everybody can afford Valentino and Gucci shoes, so to be able to have shoes that are on the same trends, but for a much more affordable price, I think that’s exactly what every girl wants.”

Hough worked closely with Emily Sun, director of buying and merchandising at Sole Society, on the shoes in her first collection, but anticipates leading the design to a greater extent as she gets comfortable with the process of making footwear. Hinting at what might be expected from her shoe line, she said, “I love a good wedge. I think that is key because you can wear it with anything. I love a really fun, feminine shoe, not really a platform but a single-level shoe that you can wear with jeans, but also a nice dress. Then, flats, I like fun, funky flats. I have been drawn to flats lately because there are just more cute flats.”

Sole Society chief executive officer Brett Markinson revealed the e-tailer has inked a long-term deal with Hough that isn’t a traditional licensing arrangement, although he wouldn’t discuss the terms of the deal nor divulge Sole Society’s revenues. He said the site signed Hough because “she is approachable. She loves fashion. She’s supermotivated, excited and can’t wait to learn and participate in developing a sense of style that she can project. She stands for cool, hip. She’s wholesome. Women relate to her and that’s what we love about her.”

Markinson explained Sole Society, which is funded by the Camuto Group, Nordstrom and Insight Venture Partners, has ambitions to grow an extensive fashion brand fronted by Hough “very similar to the way you see Jessica Simpson” and attract other celebrities to introduce fashion labels in what he described as a “white space” for chic, quality brands targeting young consumers at relatively low entry-level price points for the contemporary segment.

Sole Society already has evidence that its reasonably priced, on-trend positioning has appealed to customers at Nordstrom. The brand’s footwear premiered at three Nordstrom doors in September and is set to expand to 45 doors during the retailer’s first quarter.

The launch of Hough’s Sole Society collection is timed with the release of her movie “Safe Haven,” which is based on the Nicholas Sparks book of the same name and also stars Josh Duhamel. In the movie, which is a departure from the song-and-dance fare that has characterized Hough’s acting career to date, she plays a transplant to a North Carolina town with a mysterious past.

Hough stretches her acting range once again in a movie directed by Diablo Cody that doesn’t have a final name — “Paradise” is a possible title — or a release date. “It is about a Christian evangelist who gets in a plane crash and is burned over two-thirds of her body. She decides to renounce God and church, and goes to Vegas where she plans to sin,” said Hough. “It is dark comedy. It is really funny, but it is also very sweet.”

The exact scheduling of Hough’s expansion from footwear into other fashion categories is yet to be determined, as Sole Society wants to gather and absorb data on her shoe business prior to branching out. However, Markinson stressed the goal is the “development of a fashion brand built on the foundation of shoes that can cross 23 to 33 different lifestyle categories. We have Nordstrom and the Camuto Group to manage that as they have managed it on behalf of celebrities like Jessica Simpson.”