Pronovias hopes to have a long and happy love affair with Manhattan. 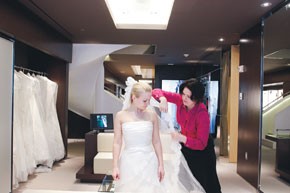 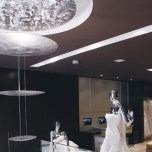 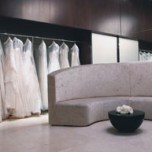 Pronovias hopes to have a long and happy love affair with Manhattan.

The world’s largest bridal manufacturer has made a major commitment to the city by opening a five-story, 21,000-square-foot flagship at 14 East 52nd Street, just off Madison Avenue, last week. It’s the company’s first unit in the U.S., and Alberto Palatchi, president of the Barcelona-based Pronovias, said the flagship is expected to do $20 million to $25 million in sales in two to three years.

With a minimalist design and rich materials, the flagship exudes calm at a time that can be alternately nerve-racking, exciting and exhausting for brides. Pronovias operates like the designer salons of the Forties and Fifties. Prospective brides are whisked to private areas of the store where they’re lavished with attention.

“Each floor is like an individual boutique,” said Sarah Burton, retail director. Sales associates at Pronovias are called “stylists” and trained to guide consumers through the more than 150 styles the company offers. “Our stylists have to have empathy, compassion and warmth,” Burton said.

Vases packed with voluptuous roses are placed throughout, chiaroscuro lighting casts brides in the most attractive light and 25 oversize dressing rooms have banquette seating for family and friends. A cream-colored silk robe hangs at the ready in each room. Alterations are done on site by nine seamstresses who work on the lower ground floor.

Unlike other bridal emporiums such as Kleinfeld, which carries over 50 brands, Pronovias sells only a handful of collections: it’s own Pronovias line, Manuel Mota, Pronovias Vintage and Pronovias Fiesta, and licensed collections Elie by Elie Saab and Valentino Sposa.

The company is working with Swarovski to create limited edition bridal dresses priced from $25,000 to $100,000. “They will very possibly be the most expensive bridal dresses in the world,” said Palatchi. “We have to have exceptional things. We have to have things you cannot find anywhere else.”

Pronovias, which began as a small family business in Barcelona in 1922, has grown into a global force with worldwide sales of $271 million in 2007. The company has expanded geographically, moving from Spain in the Seventies to other European locations in the Eighties and North America in the Nineties. Pronovias had a presence in 75 countries by 2000, and is still moving into new territories.

Pronovias will open 40 stores this year in places such as Bogota, Colombia; Cairo; Riyadh, Mecca, Jeddah and Damman, Saudi Arabia; Qatar; Mecca, and Dubai in the United Arab Emirates. Seventy stores are planned for 2009.

“Basically, we’ve been growing at a double-digit rate for the last 40 years,” Palatchi said. “We have 5 percent of the world market share. We feel that the market will double in volume in the next 10 years due to the explosion of the middle class in newly developed countries. We see ourselves doubling our world market share in the next five years.”

In Spain, Pronovias owns 50 percent of the market and in Italy it has a 12 percent share. The company’s share for other European markets is about 10 percent, while in the U.S., it’s 3 percent “through our wholesale operation,” Palatchi said. “We have a long way to go in America.”

The business has taken careful, measured steps toward growth. “We are very much a typical family business,” Palatchi said. “We believe in organic growth and we finance our companies with our own assets. We’re private and continue to be private. We don’t borrow money from banks and we reinvest in commercial real estate and our stores and flagships.”

With consolidated profit before tax of $72.5 million in 2007 and net assets valued at $358 million, Pronovias is well-positioned to expand. The company invested over $35 million to purchase and remodel the East 52nd Street property and spent $60 million (at current exchange) in 2006 to purchase its New Bond Street flagship in London.

While Palatchi characterized Pronovias as the “challenger” in New York, he said that in terms of sales, the company is “miles ahead of competitors. In terms of economies of scale, efficiency, innovation, financial muscle and distribution, we are the only global player. Our major competitors are mainly local. We have an advantage.”

Prior to opening the East 52nd Street flagship, Pronovias closed its wholesale accounts in Manhattan. “We didn’t have any relevant customers in Manhattan,” Palatchi said. “We had accounts with big stores with very low business. After making the sort of investment that we made, it would have been nonsense to continue those accounts. We did business with Bergdorf Goodman and Saks Fifth Avenue. We used to sell to Kleinfeld. We decided our brand would be better with our full offering.”

Pronovias doesn’t plan to open additional stores in the U.S., Palatchi said, noting, “We have a very successful wholesale operation in America with 900 customers for our different brands.” With 3,800 accounts worldwide, the company is represented in many corners of the world. Pronovias became the exclusive bridal resource at Harrods in 2007.

“We chose New York as world flagship instead of Europe because it’s the most competitive market in the world,” Palatchi said. “To be successful in New York is the real McCoy.”

Pronovias traditionally shows its collections in Barcelona at lavish runway shows for 3,000 guests. On May 8, the presentation will be at the New York flagship. “It’s going to be like the old haute couture presentations, which were done at the fashion house,” Palatchi said.