If you ever find yourself in What Comes Around Goes Around's new 36th Street showroom, be sure to ask about the wood beams that accent the walls of the 4,000-square-foot space. 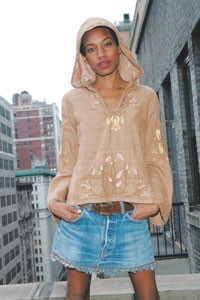 NEW YORK — If you ever find yourself in What Comes Around Goes Around’s new 36th Street showroom, be sure to ask about the wood beams that accent the walls of the 4,000-square-foot space.

There’s a story behind them, just like the extensive vintage collection, which dates back as far as the 1800s, at the firm’s downtown boutique. The beams were salvaged from a vacant barn in upstate New York, which WCAGA co-owner and founder Gerard Maione purchased — and demolished — just for the lumber. Even the showroom’s interior windows and doors that divide the space were plucked from the Catskills home Maione shares with his wife, Karen Boyle-Maione, who serves as creative director at WCAGA. Such details, of course, add to that authentic vintage mood of the 13-year-old company, which got its start well before the current vintage boom.

The showroom, however, was built to house the concern’s new clothing line. Following in the footsteps of Imitation of Christ’s Tara Subkoff and Libertine’s Johnson Hartig and Cindy Greene, who recently began manufacturing dress shirts, the Maiones, along with co-owner and founder Seth Weisser, are trying their hands at making garments. They’re starting with a small collection of dresses and casual separates for spring and plan to expand and add accessories for fall 2006.

But that’s not to say the trio is abandoning the vintage tack that’s drawn many a celebrity and stylist to their West Broadway store and 7,000-square-foot TriBeCa archive and textile library. The new collection, also called What Comes Around Goes Around and wholesaling from $28 for a cotton T-shirt to $200 for a pima cotton crocheted dress, is based on the firm’s vintage booty, of course.

“To have this resource at the tip of your fingers is just unbelievable,” said Boyle-Maione, head designer of the new line. “It’s the best education, being around it and seeing all its elements.” It’s also what separates the owners from their vintage-minded design peers — WCAGA has built a reputation as the go-to for vintage. “We’ve been a lifestyle brand for many people because of the different elements we carry — from the props to the archive and library that inspires many designers,” added Weisser.

For spring, the new collection falls into four themes: Victorian Camelot; Rock ‘n’ Roll Prisoner; Urban Hippie, which Boyle-Maione describes as “English Biba,” and Country Hippie, “the American version of hippie,” she said. There are linen hoodies embroidered with Art Deco motifs, silk jackets and camis with a lingerie bent, 19th-century-inspired lace-trimmed blouses and skirts and a number of stretch crochet pieces based on a collection Maione bought from a woman who used to design knits for Emilio Pucci.

So far, Calypso in New York, Collette in Paris and Planet Blue in Los Angeles will carry the line, and the WCAGA owners are in talks with Bergdorf Goodman for a special collaboration that will sell both the new clothes and pieces from the company’s vintage collection.

“It’s something we’ve always wanted to do,” said Maione. “We’ve kind of created our own demand in terms of people wanting something from us. And vintage, after all, is a finite thing.”