The founder and ceo of digital darling Nasty Gal is in New York for a packed schedule of appearances to promote her new book.

By Rachel Strugatz on May 6, 2014
View Slideshow 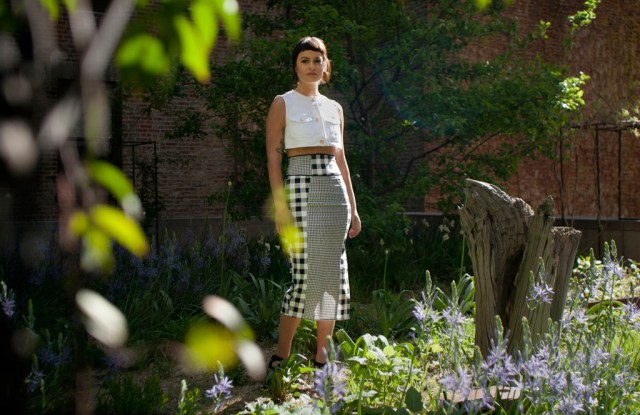 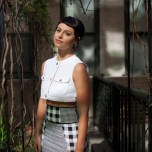 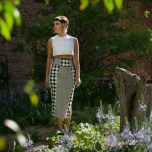 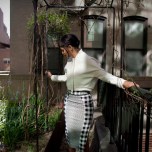 NEW YORK — Sophia Amoruso, founder and chief executive officer of the Los Angeles-based digital darling Nasty Gal, came to town to promote her new book “#GirlBoss” — and promote it heavily — but she still managed to squeeze in a little fun.

“Saturday night I went to Paul’s Baby Grand, except I woke up feeling like s–t Sunday,” Amoruso told WWD Monday, seated on a couch in her suite at the Crosby Street Hotel here. “But I’m glad I got it out of my system before the onslaught begins. Maybe I’ll have toast, but I’m not doing any more drinking this week.”

The “onslaught” is a packed schedule of appearances, where the iconoclastic ceo will speak with the BBC, ABC, “Good Morning America,” NPR and Katie Couric about her new book.

She will also partake in less traditional promotional activities — like an event today based on chapter four, “Shoplifting and Hitchhiking Saved My Life,” where Amoruso will talk about dumpster-diving for bagels. The brand will give away 50 signed books between 8 a.m. and 2 p.m. in Union Square alongside four #GirlBoss-emblazoned dumpsters filled with bagels (wrapped in plastic and also affixed with #GirlBoss stickers). Amoruso will make an appearance, the exact time of which will be revealed on Twitter this morning.

“This was Christian’s idea. It’s really cool to have people with more insane ideas than I do,” she said, referring to Nasty Gal’s vice president of brand marketing, Christian Parkes.

Taxi toppers that say, “If this is a man’s world, who cares? #GirlBoss” have been making their way around the city. And the company set up a working hotline at 1-844-GIRLBOSS offering a “quick guide to an awesome life” that features advice from Amoruso on fashion, work and money.

The ceo admitted to staying up late Sunday grilling herself — and getting grilled — on Nasty Gal’s philosophies, which include sayings like “Own it,” “No a–holes” and “Have fun and keep it weird.”

Nasty Gal had humble beginnings. Amoruso started selling vintage looks out of her apartment via an eBay store in 2006 — and by 2013, the company was estimated to have sales of almost $130 million. The e-tailer moved beyond wholesaling and built a significant in-house design team housed in a 50,000-square-foot space in downtown Los Angeles. Amoruso has also been vocal about plans to open a physical store in the near future.

“Most people who read this book will be leagues ahead of where I was when I started Nasty Gal,” Amoruso said. “I hope they will be confident that they can achieve whatever they want.”

She has also started the #GirlBoss Foundation, focused on empowering the next generation of female entrepreneurs within the creative community. A portion of proceeds from the book will go toward the cause, and four times a year a grant will be awarded to a female pursing a creative role — ranging from $500 to $15,000. Each recipient will gain exposure through the foundation and Nasty Gal’s digital channels.

And on May 19, Nasty Gal will go back to its vintage roots — bringing back a special eBay store for 10 days.

Here, Amoruso weighs in on advice, obstacles and her favorite thing to do in New York City:

WORST ADVICE: “Usually really technical advice that urges me to ignore my gut and use some textbook thinking. I don’t even ask for advice half the time. I’ve always taken advice with a grain of salt.”

WHAT HAS BEEN YOUR BIGGEST OBSTACLE?: “Myself. I’m really good at getting in my own way and creating excuses for not doing things. Everything is so much easier when you do it — in anticipating, things are a lot more painful. I’ve had to learn to bite the bullet and do things — rather than obsess beforehand.”

MOST IMPORTANT LESSON THUS FAR: “There is no normal. What my job was a few years ago was completely different than what it is today. As soon as I have it dialed in, the company changes and the team changes and my role changes as a result. What the company needs is always evolving, and I don’t get to choose what I want to do as much as I thought I would be now — which is OK. It keeps me in this position of learning new things and keeping me humble. There is always something I don’t know, and I’m comfortable with that.”

FAVORITE THING TO DO IN NEW YORK CITY: “I really like Roberta’s Pizza in Bushwick.”

WHAT SHE DOES WHEN SHE’S NOT WORKING: “Play with my poodle, Donna Summer, and hang out with my boyfriend. I just moved into a house [in the Hollywood Hills] that I bought two years ago that was being renovated. I like to hike around the hills.”