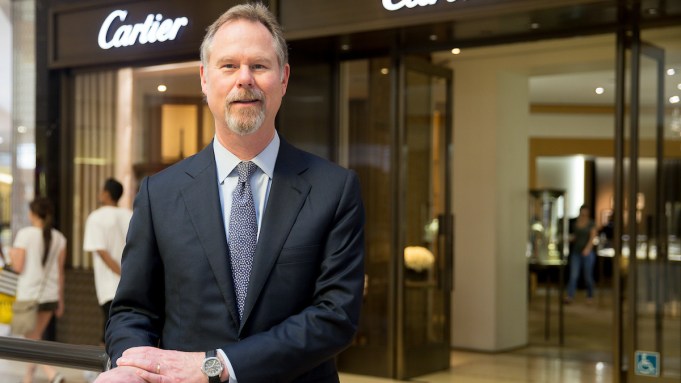 Experiential retail without the gimmicks. That’s always been the key to success for South Coast Plaza.

That the luxury shopping center is celebrating it’s 50th year — and its best year to date in terms of sales — with a vacancy level hovering close to zero and sales for this year projected to be close to $2 billion is a testament to what has been a consistent approach managing a retail property: Stock it with the upper echelon of brands, keep it well maintained and the shoppers will come.

“We don’t aspire to be a mall,” said Anton Segerstrom, a partner at South Coast Plaza. “When I think of a mall, it evokes sameness and lack of differentiation, chain stores. We have the luxury of being family owned and operated for 50 years so we’re able to take risks and do things that a lot of the REITs [real estate investment trusts] and larger companies can’t do. Our model has always been more to be the downtown of Orange County versus a mall.”

Segerstrom is the son of Henry Segerstrom, the Orange County farmer who took lima bean land and spun it into retail gold.

It’s a case study for an industry largely going through an identity crisis as the old ways of doing things cycles out to make way for the new. Bankruptcies, store closures and fire sales of brands once kings in the marketplace have made the headlines. Yet South Coast appears immune to the chaos in a bubble that envelops a county also known for Mickey Mouse and the gated, cookie-cutter communities idealized in the “Real Housewives” franchise. At South Coast Plaza, the “old ways” of doing things aren’t necessarily bad or worth tossing out.

“It’s very interesting times for retail,” Segerstrom said, addressing the pressures the industry faces in general. “I think you could argue that we are over-stored and many of the brands have got too many units. There’s a severe pressure from online retailing. There’s been a lot of shift to that, so how do you survive that and how do you have a place in all of that? What we’ve done is we’ve created a destination, an international destination.”

It’s a property whose leasing team deals in exclusives, whether that be exclusive to Orange County, Southern California or the West Coast. And that’s garnered the reputation the center commands. It doesn’t follow trends nor does it succumb to the noise of what’s of the moment, whether that be dedicated pop-up spaces, helping bring digital brands to life at brick-and-mortar or going high-tech.

“For us to increase our revenue, there are a finite number of people who can come to the center, so you have to trade up from a price-point perspective,” Segerstrom said. “A lot of the online concepts are not really attractive to us. We do not have a Tesla store or we don’t have a Warby Parker. We tend to deal with more exclusive brands that have destination appeal that are hard to find in the marketplace and that’s worked really well for us.”

South Coast also appears to be somewhat immune from discussion around technology, that behemoth that’s creating paradigm shifts across industries. Sure, the center is present on the usual suspects for social media, including Weibo. There is free Wi-Fi throughout the center and it has more than 20 electric vehicle stations. It’s not exactly groundbreaking compared to Westfield Corp. testing Pepper the robot during the holidays or Rick Caruso creating a division at his development firm to act as a think tank for the latest and greatest in retail innovation. South Coast’s tech strategy is more measured.

“Well, we embrace technology and one has to be aware of what’s going on in the marketplace,” Segerstrom said. “I think that we have a great respect for our customer’s privacy, which is something that’s very important in the digital times we live in. I think that we observe and monitor different types of technology, and if we feel it brings better customer service or more convenience to our customer, we will embrace it, but most of our customers really enjoy what I would consider high-touch instead of high-tech.”

That’s the realm South Coast operates in and that’s where it thrives, Segerstrom said. It’s not business as usual, but it’s not about being trendy for the privately held, family-owned operation.

“We just want to continue to refine the center and do better and try and bring new things to this audience of Southern California,” Segerstrom said. “I don’t want to say business as usual because that’s not correct; it’s more about innovation and what is new and monitoring technology.”

No one’s resting on laurels. Certainly there’s an acknowledgement of the fierce competitive landscape. After all, 15 minutes south of South Coast Plaza sits Orange County’s other retail crown jewel, Fashion Island, which celebrates its own 50th anniversary this year. That, too, is an upscale center looking to appeal to both a regional and international visitor, boasting Orange County’s only Neiman Marcus.

While introductions to the leasing team are common as retailers at South Coast Plaza put in a good word to others in the industry, about 90 percent of those who are there are brands the leasing team sought out on its own.

“My father, during his lifetime, enjoyed nothing more than the discovery of a new boutique or a new designer and he would enthusiastically come home and challenge all of us,” Segerstrom said. “Like I say, it’s a lot of fun. Some people collect art. I think we collect retail here.”

The question of whether lightning strikes twice is particularly relevant as it begs the question of what retail development will even look like as the industry moves forward. Can another South Coast Plaza ever be duplicated and actually succeed in a market where it’s easier to click and buy and brand loyalty has the lifespan of a fruit fly?

“We’ve been approached and had many opportunities to build in Southern California and, actually, around the world and the decision of the family has been that we know Southern California,” Segerstrom said. “We’ve been here almost 120 years. Our roots are here. We understand the community. We understand the dynamics. So we decided that it’s better to do a really good job here than to try to spread out and take our eye off the ball.”

For More on South Coast Plaza in WWD: