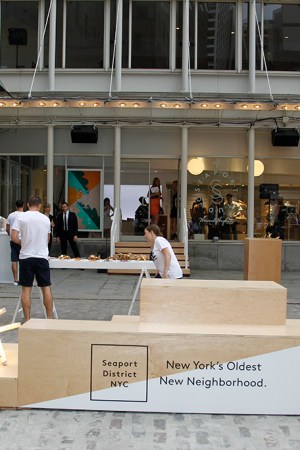 The 5,000-square-foot, two-level Seaport Studios brings a contemporary dimension to one of the city’s oldest and most historic settings by showcasing emerging designers and artists.

“The South Street Seaport was the center of the city 100 years ago. We are trying to recreate that energy and vibrancy,” said David R. Weinreb, chief executive officer of the Howard Hughes Corp., which is redeveloping the Seaport.

The first rotation, from June 15 through July 27, will include WWD’s Ten of Tomorrow 2015 honorees Scott Studenberg and John Targon of Baja East, as well as Rochambeau; Glass; Manebi; Jennifer Fisher; Union Surfboards and Finell. Also featured are artists Esmeralda Kosmatopoulos, Shantell Martin and Baron Von Fancy, as well as the Via Quadronno coffee bar.

Retailing at the South Street Seaport has long been oriented toward T-shirts, souvenirs and a few familiar brands such as Abercrombie & Fitch, which still houses a store there. Now, as Weinreb said, “We’re looking for one of a kind experiences — unmatched experiences in retail, food, beverage, entertainment and culture.”

Other major components of the Seaport redevelopment include transforming Pier 17 on the east side of the FDR Drive. The pier will reopen in the summer of 2017 with new stores and restaurants, and a one-and-a-half-acre rooftop with a restaurant, two outdoor bars and an amphitheater. The Fulton Market will be remade with a mix of food offerings and brands. Also coming is an iPic Theater luxury movie experience offering cocktails, dining, large leather reclining seats and servers, and increased support for the Seaport Museum.

“I don’t think the retailing of the past will have anything to do with the future,” said Robert Futterman, whose real estate firm serves as the leasing agent for the Howard Hughes Corp.
Futterman said the redevelopment intends to capitalize on the waterfront and its great views, and will retain “an authentic feel.” He also said an elevated retail mix will attract New Yorkers and New Jerseyans, as well as tourists, unlike the heavy tourist draw of the past.

Seaport Studios is situated in the center of the district, amid the cobblestone streets and gas lamps. Inside, “It feels like a small department store, like Colette in Paris with art, books, fashion, trinkets — everything comes together,” observed Joshua Cooder of Rochambeau, which has four racks displaying the season’s beach-inspired contemporary men’s collection.

“There’s a modular feel. It’s open, bright and shoppable and a neutral backdrop, which is great for our colors and prints,” added Targon of Baja East, an American luxury brand selling $150 T-shirts, cashmere hoodies for babies priced at $295 as well as $1,695 cashmere zip hoodies for adults.

On the other side of the first floor, artist Shantell Martin stood by her backlit canvas drawing depicting the birds, the sea, the sun and people at the Seaport, and some discreet messages like “Don’t hide in the corner” that you have to look closely to find. “There’s a very nice vibe here,” said Martin, of the Seaport Studios’ space.