Recession-stricken Spain’s finances are in a sorry state, but the value fashion retail sector is up and running. 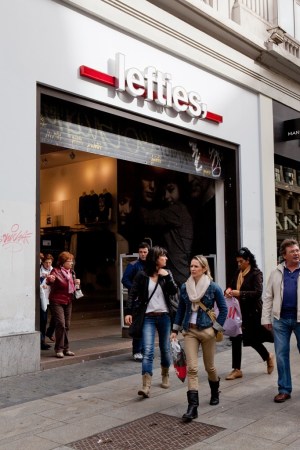 MADRID — Recession-stricken Spain’s finances are in a sorry state, but the value fashion retail sector is up and running.

The euro zone’s fourth-largest economy is crippled by debt and a high budget deficit (almost 9 percent of gross domestic product), and banks are crying out for rescue loans.

In addition, 5.8 million Spaniards — an alarming one out of four — are unemployed, which has hiked the jobless rate to a record 25.02 percent. In the third quarter of last year, the number increased by roughly 85,000, and upward of 1.7 million households — out of Spain’s estimated 16 million — reportedly have no breadwinners.

No wonder low-cost brands are proliferating — and from some unexpected sources.

For instance, department store chain El Corte Inglés last fall inked a deal with Shana — a two-year-old label with turnover last year of 85 million euros (or $109 million at current exchange) — to distribute the low-cost brand through shops-in-shop averaging about 2,000 square feet each. Sources said the agreement — which marks the first time El Corte Inglés has taken on a domestic mass-market brand — is targeting a younger customer and aims at resuscitating sales during the crisis.

“With the size of our stores, there’s room for everybody,” said Ester Uriol of the department store chain’s corporate communications department. “We have space for a huge and varied product mix with all kinds of brands, from luxury to others that are more basic and accessible pricewise.”

Spanish fast-fashion leader Inditex has a low-cost brand, Lefties, that has opened 80 stores in Spain and another 10 in Portugal since its 1995 launch. A corporate spokesman said Lefties does not have a definite expansion plan. “Lefties stores are part of Zara’s business, and the Inditex group hasn’t defined a specific strategy to develop the brand as an independent format,” he explained. Or as Inditex chairman and chief executive officer Pablo Isla said recently, “Lefties is a complement [to the Zara brand], not another chain.”

The original concept was a limited group of outlet stores featuring Zara merchandise from past seasons, but the brand now develops its own collections for 70 percent of the mix, from ballerinas at $13 to novelty bomber jackets at $39.

The remaining 30 percent is leftover Zara and Bershka, generally considered Inditex’s second most important brand based on sales, the number of stores and international presence.

Predictably, Lefties locations are sprawling and barnlike in well-trafficked urban areas and, in many cases, former Zara sites.

While Inditex has eased up on the domestic market — the group’s sales in Spain grew a mere 1 percent in the last fiscal year, Zara opened six new stores in 2012, “and we have a similar figure planned for Spain in 2013,” the spokesman confirmed.

At the annual results meeting last year, Isla said, “The Spanish market has been stable for several years; we don’t anticipate major change. We know it well, and we will continue to create employment here.”

As for the country’s economic downturn, he said, “Growth depends more on us and our decisions as a company than the external economy. That has always been our philosophy.”

While it is slowing in Spain, competitors still have a long way to go before they threaten Zara, which operates 333 stores in Spain. Nonetheless, the market remains attractive. In the case of H&M, for example, the Swedish chain — launched here in 2000 — plans to open four new stores, including units in Marbella and Palma de Mallorca, in 2013 for a total of 142, confirmed Hacan Andersson, H&M press officer. Few details are available because “we never talk about future expansion plans, openings or strategies, but we can say that [Spanish] customers appreciate our offer of fashion and quality at the best price,” he said.

Another H&M brand, COS, offers its pared-down silhouettes through six Spanish stores — three in Madrid and units in Barcelona, Bilbao and Valencia. “We love Spain and feel there are a number of great locations in which we have yet to open a COS store,” said Marie Honda, H&M’s brand director for COS. “I think the recession in Europe has made customers much more aware of how they spend their income. At COS, we offer options to our customers, making it easy to buy items with a longer lifespan, both in terms of quality and style and staples to build their wardrobe around.”

As for their niche in the low-cost market, Honda said, “In the past, customers have referred to us as the missing link between the high street and high fashion, which we hope to have achieved since the launch of the brand in 2007.”

Of the H&M group, only H&M and COS are sold here, but there are plans to launch a new brand of affordable accessories, beauty-cosmetics and women’s apparel called “& Other Stories” in April, sources said.

Primark, in the Spanish market since 2006, continues to broaden its retail presence with “a battery” of new store openings due this year, according to reports. During fiscal 2012, the Irish chain — owned by Associated British Foods —unveiled 19 stores in Europe, 11 of which were on the Iberian Peninsula. By the end of 2012, Primark’s Spanish operation was expected to reach 35 points of sale.