It was all over the runways, but will fur fly at retail this fall?

By Georgia Lee and Elizabeth Thurman on March 11, 2008
View Slideshow 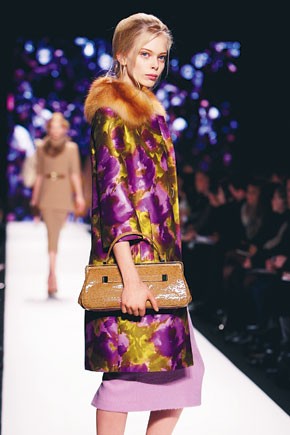 It was all over the runways, but will fur fly at retail this fall?

With creative new treatments, designers are more than ever transforming fur into a fashion trend with knitted mink shawls, fox-trimmed hoodies, sable-bordered cocktail dresses, appliqués and plenty of other novelty styles.

But while many specialty stores are wholeheartedly embracing the fur trend, others are less enthusiastic, citing fur as controversial, impractical and downright expensive in a time of economic weakness, climate change and animal activist protests. As a possible indicator of the hot-button nature of the topic, department and specialty stores, including Neiman Marcus, Bloomingdale’s, Macy’s and Nordstrom, declined interviews despite repeated requests.

Specialty stores were more open to comment. Scott Malouf, owner of Malouf’s, a Lubbock, Tex., specialty store, said the under-40 crowd is embracing fur as fashion.

“It’s not her mother or grandmother’s fur, but it’s very fun and of-the-moment,” he said. “The younger generation does not have the politically correct brainwashing that the Baby Boomers underwent in the early Nineties. They look at it with a fresh attitude. They are more driven by who’s wearing it and what the label is.”

For fall, he will add more lightweight, knitted and shearling fashion sweaters and unconstructed jackets, capes and wraps, some in color, within Etro, Lafayette 148 and other ready-to-wear collections.

Prices from $1,500 to $4,000 are “the sweet spot,” he said. Older customers want more sportswear-inspired fur pieces that work with casual clothing, for everyday luxury, Malouf said. While the mild climate doesn’t deter customers’ interest in fur, it does make it imperative to concentrate on unique items that inspire customers to buy based on desire rather than need, said Malouf.

At Frances Heffernan, a women’s specialty store in Winnetka, Ill., buyer Allyson Bass said, “We see fur as a trend for fall. We’re buying it in more novelty applications.”

For casualwear, she bought fur jackets and reversible fur and shearling vests by Henry Cuir and liked fur touches on sleeves, belts and hemlines in coats by Bogner. For cocktail dresses, she bought Redux’s sleeveless bronze taffeta dress bordered with a mink hemline. After an especially harsh winter, Heffernan stocked up on fur in cold-weather wraps and accessories.

Fur performs well in a trunk show format for James Davis, a women’s and men’s specialty store in Memphis. Customers have been buying fur-trimmed jackets, sweaters and outerwear by Cassin at a fall trunk show, according to buyer Cami Krablin.

Given that, she bought novelty fur items at the recent collections. “I noticed the creativity, and our customers respond to specialty fur items and vests that work well in our climate,” she said.

She bought L.A.M.B.’s plaid jacket with a detachable fur collar and a Seventies-inspired mink-trimmed leather bomber jacket by What Comes Around Goes Around.

At Gus Mayer, a Birmingham, Ala.-based designer specialty store with another location in Nashville, the fur business is stronger than ever due to designers’ imaginative applications.

Designer buyer Janice Elliott said, “With lots of special events in our areas, fur has always been strong for us. I noticed more interest in fur shrugs and wraps this year, even though customers may not have bought a new evening gown.”

Elliott bought more fur from designer collections for fall, including jackets, coats and accessories trimmed with mink, fox and sable by Michael Kors and Zang Toi and fur-trimmed cashmere cardigans by Cynthia Rose.

Some retailers, such as Nancy Schneider, owner of Nancy & Co., with three New York locations, pass on fur altogether.

“I’m surprised at so much fur in the market. I stopped selling fur five years ago,” she said. “I don’t believe in it, and some of my best customers won’t wear fur and asked for alternatives. I replaced it with down and knitwear, which works well, given climate change.”

Jeffrey Kalinsky, owner of Jeffrey, designer boutiques with New York and Atlanta locations, said he was “gun-shy” about fur. Given the costs and limitations, he questioned fur as a realistic proposition for retailers.

“It’s been all over the runways for the past five years, but it is much more expensive now,” he said. “It’s hard to justify buying a designer suit with a mink collar for $5,000, that costs $2,500 without it, when the fur makes it less versatile and may not be the customers’ cup of tea,” Kalinsky said.