Following the launch of a new concept store in Hollywood later this year, the British men’s wear label will look to grow in Asia.

By Kristiano Ang
with contributions from Lucy Morris
on May 31, 2012
View Slideshow 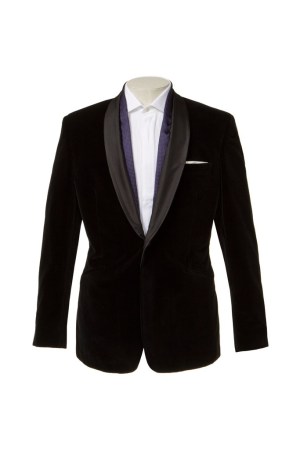 SINGAPORE — Following the launch of a new concept store in Hollywood later this year, British men’s wear label Spencer Hart will look to grow via licensing and expansion in Asia, its founder said.

“This is the end of our [current] development strategy as it is,” said Nick Hart, Spencer Hart’s founder. “We now want to develop retail and controlled licensing.” His 10-year-old label, which is backed by celebrity investors such as British singer Robbie Williams, is known for its clean-cut black suits and white shirts made from lightweight fabrics.

Hart said his plan was to license items in “areas not core to the brand,” citing Tom Ford sunglasses and fragrances and Calvin Klein’s successful underwear operation as examples he would like to follow. “Calvin Klein developed incredible underwear,” he said. “It’s not my taste now but it was cool, simple and a billion-dollar business. It shows you can do good licensing.”

Spencer Hart’s stores have already been configured to support such licensing opportunities. Last year, it opened its flagship in the former premises of a bank on Brook Street, in central London. “The idea was to develop a lifestyle store to demonstrate what we could do with the brand,” said Hart. To that end, the bank’s vault was configured into a men’s salon where customers can order food and get a haircut. The upcoming Hollywood store is expected to offer a somewhat similar experience.

Despite only having limited presence in Asia — Spencer Hart is stocked at Isetan in Tokyo and Lane Crawford in Hong Kong — the label opened men’s fashion week here to a sell-out crowd last month. “Asia is a tiny part of our business but it is still early days,” said Hart. “We are very interested in Asia. We are talking to major players in Hong Kong and one or two people in Singapore.”

One factor that could work in Spencer Hart’s favor in steamy East Asian climes is its heavy use of shirting materials and other lightweight cloths for jackets. “My favorite fabric is fresco,” said Hart, who was wearing a black seersucker jacket and dark trousers. “I’m obsessed with super lightweight fresco mohair [blends]. It’s very colonial looking, like what people wore in colonial India and here in the Twenties.”

Another is the cachet brought by its store on Savile Row, where Spencer Hart began with a boutique in 2002. That has allowed him to sell off-the-peg jackets for upward of 2,000 British pounds, or more than $3,100 at current exchange, which he readily admits is one of the higher price points around. Still, he isn’t very impressed with the august tailoring houses that are his neighbors. “A lot of them offer just one point of view but men have different bodies,” he said. “I admire the quality, but not the designs.”

Closer to home, the company recently opened its latest store on Mayfair’s Brook Street in a former bank across from Claridge’s. Much like Hart’s suits, the architecture of the glass-fronted store is clean and masculine with a nod to the neat, minimalist glamour of the Rat Pack. The store stocks Hart’s ready-to-wear, casualwear and bespoke collections, which are housed in a keypad-controlled bank vault in the basement. The store also offers a curated selection of books, including Jack Kerouac’s “On the Road” and biographies of dapper old Hollywood types, in addition to the Floris for Spencer Hart fragrance, Edward Green shoes and Oliver Goldsmith glasses.