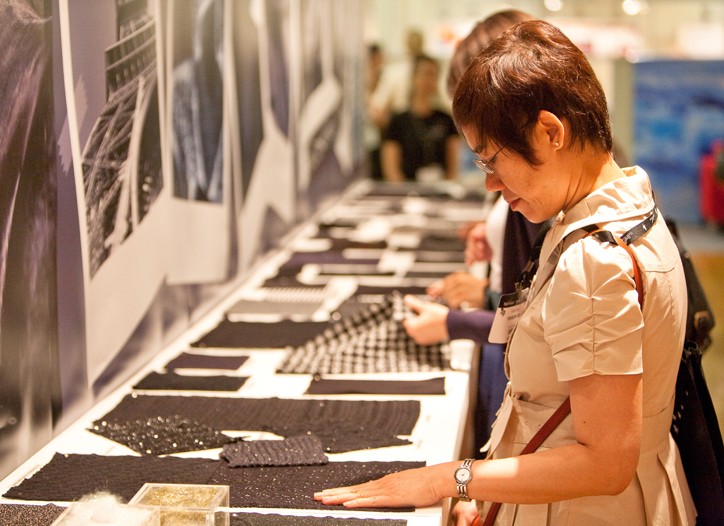 NEW YORK — The challenges of the global recession presented an opportunity for organizers of the SpinExpo yarn fair, which made its debut here last week.

More than 60 mills from 16 countries set up at the Metropolitan Pavilion for three days starting July 22 in what is believed to have been the first yarn fair here in more than five years. Mill executives and sales representatives said the economic downturn reduced attendance of U.S. buyers at European yarn fairs, making the return of a New York show more appealing. Exhibitors found it beneficial to meet with clients who have seen their travel budgets slashed and were on the hunt to connect with new, smaller companies to bolster business.

“[Buyers] are very pleased that this show is around the corner,” said Hamish Carruthers, founder of textile consultancy Carruthers Associates. “People are not traveling. Budgets have been cut, so if you can’t get them to come you have to go to them.”

Renato Cotto, chief executive officer of Cariaggi International, said, “It was the right time to do it because most of the American companies cut their budgets on travelling.”

Given the economic environment, Cotto said the company’s focus was on consolidating and maintaining its business.

“All the customers, even the biggest ones, are reducing their quantities,” he said, adding that orders from some customers were down by as much as 20 to 25 percent.

However, Cotto said he has seen small signs of buyers regaining confidence in the direction of the market.

“I can say it started at Pitti Filati,” said Cotto. “Europe, Japan and America started to be a bit more optimistic. A little bit. Nobody is coming here with a Champagne bottle saying ‘Hey, I was waiting for you,’ but it has improved.”

Cotto said Cariaggi intends to return for the second edition of the show and believes mills that didn’t participate will likely jump on board.

Gianluca Nardi, a sales executive with Lineapiu Group USA, who was representing the company’s Chinese subsidiary, Top Line Textile Co., said he had seen many high quality customers who were doing more than window shopping. Extending into the U.S. market, though, has difficulties.

“It comes down, unfortunately many times with U.S. customers, to the price and the fiber,” said Nardi.

Educating U.S. buyers and making them comfortable with new products poses a significant obstacle. Buyers seem reluctant to incorporate fibers being used in major markets such as Europe and Japan.

“This is a market where the concept of crispy yarn, a dry hand feel or a heavy mohair look is still very difficult to understand,” said Nardi. “[U.S. buyers] are mainly looking for super soft — no wool. When it comes down to Southern stores, they don’t want to even see wool on the label. That’s the biggest challenge. We need to find something that is soft, not wool, maybe even not cashmere, with a good price that you call sell all year round.”

Edwin Nazario, Australian Wool Innovation’s senior vice president for the Americas, believes the show will provide an opportunity to gain a deeper education and change attitudes.

“We’re aware that the industry has been neglected for a while and that there hasn’t been a lot of education,” said Nazario.

AWI was host at a pair of seminars during the show and introduced two knitwear collections, Merino Touch and Merino Casual. The Merino Touch yarns and knits aim to provide a luxury product at a more affordable price, are machine washable and can be blended with other high-end fibers. Merino Casual incorporates technologies capable of giving a garment a three-dimensional effect, a vintage look, pleats and even burn out effects. Features of both collections were showcased in an AWI runway show.

“Our message when we get people here is to talk about quality and to educate,” said Sasso. “We like to talk…from fiber forward. If we can highlight those questions about where the fibers come from, the property of the fiber and how it’s spun, then maybe [buyers] will start asking the right questions. If you come in here, you’re going to get an education.”

Sasso said the goal for Buhler, which is headquartered in Switzerland and also has U.S. production in Georgia, was to examine new markets and stress to buyers that quality starts at the raw material stage.

Carruthers Associates was responsible for developing SpinExpo’s trend presentations and also introduced an online textile design program called scotcloth.com. Carruthers said he had a steady flow of visitors to his booth, and many were particularly interested in environmentally friendly products.

“The environmental question is strongly in everybody’s mind,” he said. “Whether you’re from China or the United Kingdom, people are very aware that we’ve got to clean things up. There was always a feeling that the textile industry wasn’t interested, but they know they’ve been one of the biggest problems.”