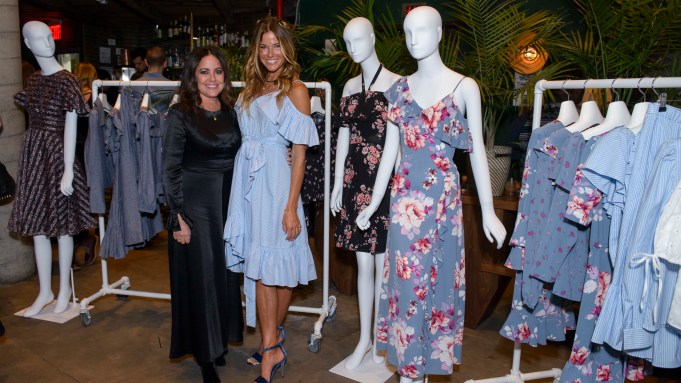 Macy’s is going romantic, feminine and flirty for spring with an exclusive limited-edition capsule collection of dresses, coats, skirts, pants and tops from Jill Stuart.

The 26-piece collection, called Jill Jill Stuart, launches on macys.com and on the Macy’s app on Feb. 1. By Feb. 15, the Jill Jill Stuart line will be inside 151 Macy’s stores around the country, housed in proximity to other contemporary labels.

Macy’s as well as Bloomingdale’s, Nordstrom, Shopbop and Neiman Marcus, among other retailers, already sell dresses under the Jill Jill Stuart diffusion label. But Macy’s has landed the Jill Jill Stuart separates and coats exclusively. It’s the latest in an ongoing series of capsule collections, a strategy considered by Macy’s chief executive officer Jeff Gennette as a “third bucket” in the pursuit of exclusive merchandise. Macy’s also has a well-developed stable of private brands such as INC, Hotel and Alfani, and sells exclusively brands such as Tommy Hilfiger sportswear and DKNY. With the designer capsule collections, also referred to as temporary or guest collections, Macy’s has collaborated with Anna Sui, Cynthia Rowley,  Karl Lagerfeld, Kinder Aggugini, Matthew Williamson, Yigal Azrouël and Giambattista Valli. INC has also collaborated with celebrities and fashion stylists over the years, but more so as models for image/ad campaigns and product curations including Heidi Klum, Camila Alves, Kate Young, Max Irons, Tom Stubbs and Gabriel Aubry.

The strategy ties Macy’s to the good name of a designer or celebrity and helps the store exude newness, seize upon a trend faster and hopefully get a sales lift, while maintaining the Macy’s price points for the masses. Jill Jill Stuart will retail from $89 to $199. Macy’s does not sell the Jill Stuart designer collection.

“The beautiful collection she’s created for Macy’s is quintessentially Jill Stuart, a range of dreamy ‘It’ Girl pieces,” said Cassandra Jones, senior vice president of Macy’s fashion. Jones added that the Stuart style is “romantic and flirty with a modern, cool edge.”

Macy’s is considering its Jill Jill Stuart line a one-off, though Rybak hinted at the possibility that the collaboration gets continued beyond the spring.