Spring has reached full blossom in the activewear field and stores are seeing brisk sales of fashion-oriented performance merchandise.

By Melanie Kletter on May 5, 2005
View Slideshow 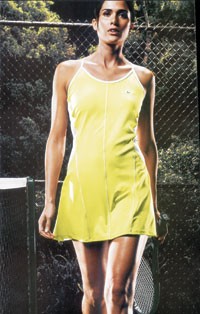 NEW YORK — Spring has reached full blossom in the activewear field and stores are seeing brisk sales of fashion-oriented and performance merchandise.

While the weather in the Northeast has been slightly cooler than usual, retailers are reporting a warm consumer reaction to bright colors and stylish activewear, as well as high-tech performance items. Spring is always a key season in the athletic world, as casual and hard-core athletes resume outdoor activities like running, biking, golf, tennis and hiking.

This year, color is a big story in activewear as consumers gravitate toward hues such as pink and green.

“Everyone wants color, especially pink and flower prints,” said Dana Mason, apparel buyer at Mason’s Tennis Mart, a 29-year-old tennis retailer in Manhattan. “Women want clothes that are bright and fun. People see tennis players like Maria Sharapova wearing color on the court and they like that.”

One activewear newcomer has already exceeded expectations. Adidas by Stella McCartney hit stores in March and quickly sold out of initial deliveries at Bloomingdale’s and Nordstrom stores in the U.S., and at Isetan in Tokyo, the company said last week. The line, which has high-tech fabrics paired with stylish designs, is being rolled out for fall to stores in Europe and Asia.

At Athleta, one of the largest women’s athletic catalogue firms, sales this spring have so far exceeded plan, said Tami Anderson, marketing director. The catalogue carries apparel and other products for a range of activities such as yoga, surfing, hiking, running, walking and weight training.

“We didn’t offer any new categories this season, but we went deeper with our surf and swim assortment driven by the introduction of our own Athleta swim line earlier this year,” Anderson said. “We’ve expanded our selection of our Athleta brand pieces, which now includes an assortment of tops, bottoms, tankini tops, one-pieces and skirts.”

The Petaluma, Calif.-based company has been building up its private label offerings sold under the Athleta name and those products now account for about 60 percent of its selection. Among other brands it sells in its catalogues are Prana, Hind and Adidas. Anderson also said the company is exploring the idea of opening stores.

“Our strategy at this point does not include wholesaling,” she said. “We’d be more likely to open up our own retail stores and grow the brand in that direction.”

The company mailed out more than one million catalogues this season, she noted.

At Equinox Fitness, the upscale health club with 24 boutiques, merchandise sales have been up as the company has shifted to more fashion-oriented offerings.

“We finished up the first quarter 10 percent over last year’s and above plan,” said buyer Marian Baker, who has been increasing the number of fashion and contemporary brands sold at the stores. “What has been our strong suit are smaller, niche brands, which is indicative of our customer’s demand for a more unique, specialty store product.”

Among the brands she cited as standouts this season are Gigi and Fitness Fit, two lines from South America, as well as Susana Monaco and City Tech. The company’s revamped private label line has also been selling well, particularly the men’s merchandise, she noted.

Equinox continues on its growth spurt and plans to open six stores by the end of this year in markets around the country, Baker noted.

The tennis season has been off to a brisk start at Mason’s Tennis Mart. While the professional outdoor tennis season is just getting into full swing, sales of racquets and apparel to general consumers have already begun well. Among the top-selling women’s brands at her store this season are Nike, specifically the Nike Serena Williams collection, as well as Tail and Polo Ralph Lauren.

“We are also selling a lot of tie-dyed headbands, and socks with Swarovski crystals,” Mason said.

“Nike’s golf line has technical properties and people are looking for that now,” Granier said. “In general, we are selling more fashion, and very trendy and young looks.”

Outdoor apparel has been slightly more challenging for some brands, however. Columbia Sportswear, which makes outdoor apparel and also operates company-owned stores, saw its shares tumble about 16 percent on Friday. The stock fell after the company said its second-quarter and full-year earnings would drop due to a decline in orders for fall deliveries and a shift toward lower-margin product categories.

On the positive side, Columbia also experienced robust demand for certain sportswear items, including spring shorts, woven and knit tops, pants and sweaters.

Timothy P. Boyle, Columbia’s president and chief executive officer, said in a call with analysts that, “General retail conditions this spring have been fair, and sell-through of sandals and shorts has generally been soft in markets where weather has been cool this spring.”