‘Star Wars: The Force Awakens’ and Bloomingdale’s Team for Charity

Ten designers have created looks based on a “Star Wars” The Force Awakens” character for Bloomingdale's windows and a charity auction. 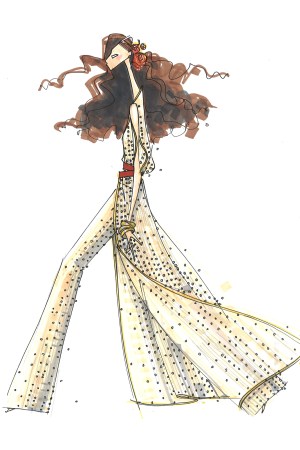 NEW YORK — The Force is headed toward Bloomingdale’s.

“Star Wars: The Force Awakens,” the much-anticipated movie from Lucasfilm that opens Dec. 18, has partnered with Bloomingdale’s for good (not evil) – a  major philanthropic initiative and the windows of the store’s Third Avenue flagship.

Beginning Tuesday, five of the windows will be outfitted with costumes and props from the upcoming film, each focused on a key location from the movie. Then on Dec. 3, the windows will switch to a group of “Stars Wars: The Force Awakens,” looks created by 10 fashion designers, consisting of Diane von Furstenberg, Cynthia Rowley, Giles Deacon, Halston, Opening Ceremony, Ovadia & Sons, Parker, Rag & Bone, Timo Weiland and Todd Snyder.

The designer participation is part of a fund-raising initiative called “Force 4 Fashion,” where each designer created a look based on a “Star Wars: The Force Awakens” character, which will be auctioned for charity. Each designer made two samples: One for the auction and one for the windows. (The Third Avenue windows differ from the Lexington Avenue holiday windows that will be unveiled Wednesday).

Anne Keating, Bloomingdale’s senior vice president, public relations, special events and corporate philanthropy, said she believes the collaboration represents a cross-section of fashion, philanthropy and pop culture. “The release of the new ‘Star Wars’ film is one of the most anticipated events of the year. Bloomingdale’s is continually mining for of-the-moment initiatives to surprise and delight our customers while also furthering our philanthropic outreach,” she said.

The designers’ looks will be shown at a “Force 4 Fashion” launch event, presented by Kay Jewelers and CoverGirl in Chelsea in New York on Dec. 2. The following day, the looks will go into Bloomingdale’s Third Avenue windows. Each outfit will be auctioned off through charitybuzz.com, with the winning bidders revealed the week of Dec. 12. The proceeds will benefit Child Mind Institute, on behalf of Star Wars: Force for Change, a charitable initiative that harnesses the power of “Star Wars” to empower people to make a positive impact on the world. Child Mind Institute is devoted to transforming mental health care for children by finding more effective treatments for childhood psychiatric and learning disorders.

In addition, Michael Kaplan, the movie’s costume designer, has designed three limited-edition “little brown bag” reusable totes based on “The Force Awakens,” that are exclusive to Bloomingdale’s, and available for purchase through the holiday season starting just before Thanksgiving. A portion of the proceeds from the sale of the totes will also go toward Child Mind Institute on behalf of Star Wars: Force for Change.

Paul Southern, senior vice president of licensing for Lucasfilm at Disney Consumer Products, said Disney has a long-term relationship with Bloomingdale’s and has done a number of programs with the retailer over the years. He said linking with the retailer made sense “because of the strong relationships Bloomingdale’s has in the design community,” adding that the designs are all “bespoke looks that can be worn.”

“The intention is to take the inspiration from the film, and to provide something personal that can be worn,” said Southern. He explained that Disney shared elements of the film with the designers, and allowed them to choose a character from the movie they could relate to or are inspired by. The looks consist of men’s and women’s apparel, including eveningwear, suitings and casualwear. “The intention is to create the pieces for the auction. I think the relationships will develop with a number of these designers, so we can extend some of these designs into more commercial programs,” said Southern. But there’s no commitment at this time.

Among the film’s characters, Southern said they are introducing “a brand new bad guy to the world” named Kylo Ren, adding that “we’ve got designers who are designing pieces for men inspired by that character, and we have a designer designing a piece based on that character for women.” The film is introducing a new droid called BB-8, “who’s already created a lot of interest through the trailers,” and there’s a piece inspired by him as well. There’s also a new female bad guy named Captain Phasma.

“The idea was to create something that celebrated strength and beauty, which is perfect for Rey. It is also lightweight and easy, because movement is so important,” said von Furstenberg, explaining her design.

Separately, Southern said a broad range of “Star Wars: The Force Awakens” apparel and accessories will be going into pop-up shops at Bloomingdale’s throughout the chain.

He said the designers have been working on the designs for several months, and each was in charge of manufacturing their own look.

Keating anticipates that the Star Wars charity will have broad appeal to fashion lovers, “Star Wars” fans, and supporters of children’s issues.” Whether customers will wear the bespoke pieces, she said, “It’s hard to say the end use of each design. Whether kept as a collectors’ keepsake, worn as an everyday item or for a special event, it will be up to the winning bidder.” The windows with the bespoke collections will stay up through Dec. 18. The designers’ looks will be featured along with original costumes and props from the movie.

Simultaneously, in the U.K., 10 London-based fashion designers, representing a mix of established and emerging talent, will unveil a special “Star Wars: The Force Awakens” initiative, in support of Great Ormond Street Hospital Children’s Charity, on behalf of Star Wars: Force for Change.

Historically, the “Star Wars” product lines have been dominated by toys like Hasbro light sabers, action figures and Lego sets that appeal to all ages and genders. Southern explained that after doing some research, they found out there are 250 million girls and women who are fans of “Star Wars.” This fall, they developed more products aimed at women and girls in the apparel, accessories, home, consumables and stationery categories.

In addition to the bespoke fashion collaborations and merchandise at Bloomingdale’s, there will be ready-to-wear and accessories at HerUniverse.com, J. Crew, J.C. Penney, Kay Jewelers, Kohl’s, We Love Fine, Macy’s, Nixon, Target and Ugg Australia.