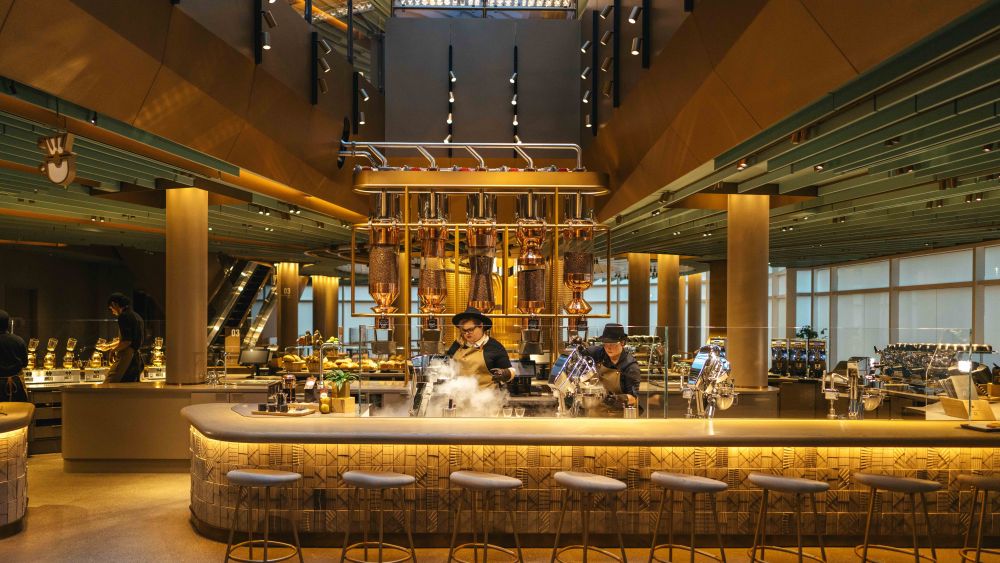 CHICAGO — Michigan Avenue can now add the world’s largest Starbucks to its attractions.

Opening on Friday at 646 N. Michigan Avenue, the 35,000-square-foot store will mark the coffee company’s sixth Reserve Roastery, an experiential concept that first opened in 2014.

“This has been a five-year journey for Starbucks, a journey where we wanted to create an immersive customer experience around roasting, brewing, small-batch coffee,” Kevin Johnson, chief executive officer of Starbucks, said at a preview of the Roastery on Tuesday.

“The pinnacle of customer experiences around all things coffee and we started with our first Roastery in Seattle, we then learned and adapted and we then built the Roastery in Shanghai, followed by Milan, New York, Tokyo and this week we have the opportunity to open this iconic Starbucks Reserves store here in Chicago.”

Located at the corner of Michigan Avenue and Erie Street in the former Crate & Barrel furniture store, the five-story retail space offers plenty of places to grab a freshly roasted coffee — with a projected estimate of 200,000 pounds of coffee roasted on-site per year; cocktails, with exclusive-to-Chicago drinks created by local mixologists; lunch, or even dessert, offering locally produced chocolates designed to pair well with coffee.

It’s the only location outside of Milan to offer Nitrogen Gelato, made-to-order gelato mixed by hand. Other attractions include the Princi Bakery and Café, offering baked goods by Italian baker Rocco Princi, and a roof terrace.

In terms of design, the store features the original white façade and floor-to-ceiling windows that wrap around the building and skylights.

“A lot of the colors and a lot of the materials were very influenced by the building,” said Jill Enomoto, vice president of Roastery Design and Concept for Starbucks.

Interior details include light-colored woods; white oak, which, Enomoto noted is indigenous to the Midwest; soft paint colors; marble-tiled bars on each floor that mimic the geometry of the ceiling, and polished concrete floors. Fireplaces add a warm, cozy atmosphere, she said.

A 56-foot-bronze cask, the tallest cask in the Roastery portfolio, was purposefully located toward the front of the store to draw attention inside. It features eight chambers and six are dedicated to coffee. It makes a noise when in use, which Enomoto calls “symphony piping.”

“We put the cask, which is where all the roasted beans sit and throughout the day they accumulate like an hour glass, front and center in the rotunda,” Enomoto said. “We think it will create this really amazing beacon right on the corner of Michigan and Erie — a fantastic visual.”

To illustrate the brand’s ties to agriculture, five different shades of green, the color of coffee beans before they are roasted, were used to paint the ceiling on each floor.

“It radiates out from the cask, from lighter to darker, as you get further away from the cask,” Enomoto said. “If the cask is the middle of the sun, the ceiling is the sunbeams.”

Designers turned the edges of the ceiling up to create visual interest from the street, she noted.

“We really thought about her presence on the outside as well as what she looks like on the inside,” Enomoto said. “We had so many fabulous windows and skylights in this building, we had this unique opportunity.”

During the opening remarks, Johnson called Gordon Segal, the founder of Crate & Barrel, a legendary retailer and visionary. “He’s the vision behind this iconic building on Michigan Avenue,” he said.

Segal said the building took about two years to build and they went through 27 designs before finalizing on a concept.

“As it was going up you saw the steel going up and we were very worried, none of us understood what it would look like. Once it was finished, it became very well known as a building where people would walk in and have experiential retailing,” Segal said. “It was more than selling housewares and furniture. It was really about selling a feeling, an experience about how to live.”