A covey of celebrities added a dose of glitz to the MAGIC trade show in Las Vegas this week. 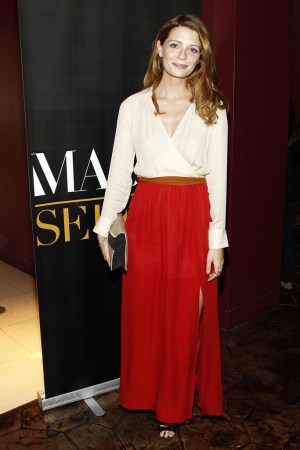 Trade shows tend to emphasize the nuts and bolts of the fashion business rather than the glamour.

But a covey of celebrities added a dose of glitz to the MAGIC trade show in Las Vegas this week. Molly Sims, Melissa Joan Hart, AnnaLynne McCord, Adrienne Maloof, Taryn Manning, Eric Stonestreet of “Modern Family” and Peter Facinelli of the “Twilight” series gathered at a MAGIC Select-sponsored luncheon on Tuesday at Aureole to network with apparel industry executives and discuss potential partnerships.

“What better place to spend Valentine’s Day than at a trade show?” quipped Mischa Barton, who has a namesake bag line and was looking for inspiration and branding ideas on the show floor. “I’m single if you haven’t guessed. I’m joking. But I am single.”

Selita Ebanks is aiming to launch a swimwear collection and a sample line of it will debut on BET’s “Rip the Runway” model search program. “I’m hosting the show and have my own segment called Sass by Selita. Sass is the female version of swag,” explained Ebanks. “I want to expand into shoes and accessories, and MAGIC is the place when you want to find out who’s who. I’m learning how to sketch and where the darts go. I live in the trim store. I’m very hands-on.”

Kellan Lutz, fresh from attending several New York Fashion Week shows, was on hand to support his Abbot + Main label and talked up a new promotional video for it he recently shot with model Kate Upton, who became exponentially more famous this week by gracing the cover of the new Sports Illustrated swimsuit issue.

Perhaps the unlikeliest celebrity making the scene was Ray Parker Jr., the singer and songwriter of 1984’s chart-topping “Ghostbusters” theme song. “I want to license the phrase ‘Who You Gonna Call?’” divulged Parker Jr. “This is my first time getting my feet wet in this area. I think it’s a good idea. I want to put it on cell phone covers.”