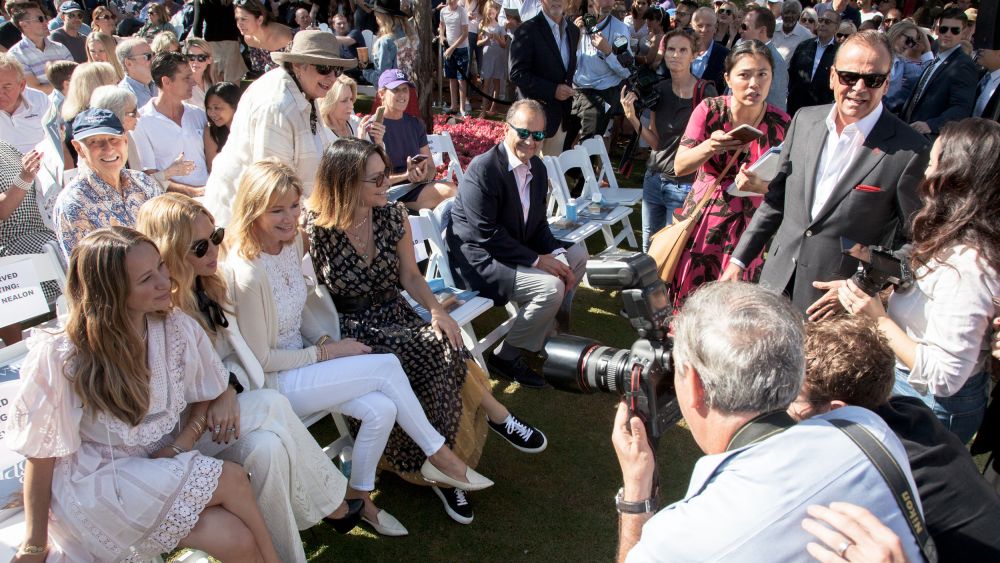 Except that on the three acres where there used to be construction fences and Caruso billboards, there now stood a 125,000-square-foot retail village, in all its Cape Cod-meets-Craftsman glory, literally across the street from multimillion-dollar Colonial homes.

The orange cones and policemen directing an inordinate amount of traffic on Palisades Village Lane signaled that there was an event going on — the ribbon-cutting to officially open Rick Caruso’s latest retail center, six years in the making and completed at an estimated cost of $200 million after two years of construction.

On the grassy lawn that’s a hallmark of Caruso’s other centers The Grove, The Americana at Brand and The Commons at Calabasas, rows of white folding chairs were set up in front of a stage awaiting Caruso, Los Angeles Mayor Eric Garcetti, Councilman Mike Bonin and honorary Palisades mayors Billy and Janice Crystal. In the front row were Rachel Zoe, Elyse Walker, Jennifer Meyer and Lauren Conrad, all of whom have shops in the center.

“Hi everyone. Today I’m at Palisades Village, so excited for the opening of my pop-up,” Zoe said into her iPhone as she posted on Instagram Stories.

Before the ceremony began, guests on the lawn helped themselves to hot coffee in ceramic mugs, danishes, muffins and Caruso branded cartoned water. Surrounding the lawn were several thousand more people, for a total of 5,000 at the 9:45 a.m. ceremony, a number that would swell to 25,000 to mark the first official day of business.

After the speeches concluded, the crowd began to disperse and file into the open restaurants, stores and brick lanes, but Caruso proved to be a bigger magnet than Crystal or Garcetti.

“Oh, Rick, can we take a picture with you? We’re big fans,” said one man, holding a toddler. “Sure, I’d be honored to. Look at those cheeks!” said Caruso, reaching for the baby, his eyes twinkling underneath his Tom Ford shades.

It’s clear Caruso relishes this part, and it’s been a decade since his last opening at The Americana.

“This is the best part. Every stage we go through I love, honestly. Envisioning it, titling it, designing it, building it, but they payoff is this. To just sit, take it in and see the people enjoy it. We open this property and there’s this thrill about it. There’s a gratefulness they have and we have,” he said.

Caruso paused to blot his face with a tissue. “It is warm. Maybe we could have repositioned the stage.” It was an afterthought said to no one in particular, but not one he’s likely to forget before his next opening.

“He does notice everything, and he tells people,” said his wife Tina, who trailed alongside, greeting people and holding a bouquet of roses from Walker.

“I notice it, the team notices it, but the average guest on the property won’t,” he said. “See these pink flowers?” he asked, pointing to the begonias skirting all the mature trees on the lawn. “We just changed them out last night because I didn’t like the white ones that were there. They just didn’t pop against the grass.”

He was quickly interrupted by Tyra Banks, a local resident who had clearly come off-duty, her hair tucked under a scarf and baseball cap, wearing a gray T-shirt and black trousers. “I just wanted to say hi,” she said before disappearing with a friend.

After quickly ducking into The Draycott restaurant, which opened its first location outside the U.K. at Palisades Village, for a touch-up from his groomer, Caruso told owner Matt Hermer, “This air-conditioning is brilliant. Your ladies’ room is lovely. Your men’s room is still being painted.”

“And I’ve just taken a video of you getting a touch-up and posted it,” Hermer joked.

It took Caruso several more minutes to make his way to the far end of the lawn, anchored by a Blue Ribbon Sushi, which stood across the street from some homes where neighbors stood on their front lawns, taking in the scene.

“The city wanted us to put a fence here, but we didn’t want a fence separating us from the town. We wanted to be part of the town,” Caruso said.

“We’re connected to a residential community, which is very unusual in a commercial development. So when you look at the scale of the buildings, they start scaling down. This building looks like a home because we wanted the people in their homes on Monument Street to look across and have it look like a home,” he added.

“A lot of the food is around the park — McConnell’s Ice Cream, See’s Candy, the coffee. If you pop into Blue Ribbon, you see it’s very cozy. Everything here we made smaller. We actually have more shops and doors here than at The Grove, but this whole project could fit inside the Nordstrom at The Grove,” he said. On Tuesday, Caruso called from the property to report that sales per square foot were outpacing The Grove, which, at $2,200 per-square-foot, is the second most profitable retail center in the country.

“I’m actually more optimistic than I was originally after seeing yesterday and today during the day — it’s a weekday and traffic never slowed down. There are waiting lines outside all the restaurants,” he said.

Several brands who sell at Nordstrom in The Grove, report that’s it’s their top door in the U.S. Does Caruso think Palisades Village will be the same one day? “I think so, the way we are tracking, I really do. Let’s let it run a little and we’ll see. I’ve seen the numbers, but the retailers have sworn me to secrecy.”

As he made his way down the brick path on Saturday, getting stopped every two feet or so to take a photo and shake peoples’ hands, he said, “There is a bit of a science and art of how you locate a restaurant between retail. The properties are designed for people to come enjoy themselves; they’re never designed just for shopping. If they were, we’d build an ugly indoor mall. That’s the problem with indoor malls. They were built for shopping and not people.

An older man, wearing black gym shorts and a black logo T-shirt, his tan visible beneath his gray stubble, made his way toward Caruso. “Rick, it’s Ron Meyer. I just wanted to say I had tears in my eyes when I saw my daughter’s store. This place is amazing.”

“He’s a legend,” Caruso said of the NBC Universal chief. “I can’t believe he cried.”

While walking past A.L.C., Anine Bing, Cuyana, Sephora Studio and Chanel Beauté, Caruso said, “It’s not a Rodeo. It’s more the scale you get in St. Tropez. One of the areas that’s always influenced me over the years — have you ever been to the shopping street in Capri? It’s very small. I’ve always loved that and would say to my retailers, ‘Why are we arguing about 25 or 50 feet of frontage? You go to Capri and they have 20 feet.’ Amazingly the retailers trusted us and allowed us to curate their offering and scale down. It took them a lot of years to come around and it took me years to realize it as well. We also had to reinvent ourselves and think differently.”

When he finally made it to Jennifer Meyer, she was busy selling earring to customers as her friend Sara Foster looked on. “Rick!” the women said, holding out their arms. “We’ll come back when you’re less busy,” Caruso said. “No, no,” Meyer said. “Now is good. I’m still tearing up from my dad. I’ll be crying all day probably.”

A few doors away, Zoe was also managing her opening-day mayhem. “This is amazing. My kids will go on their first dates here and come here for movies and maybe come here with their wives. It’s not like just a store opening — it’s a community that’s going to be here forever and it’s really cool to be part of the opening. But it didn’t occur to me until this morning.”