MILAN — The new course of the Stefanel brand will be revealed today when the brand unveils the first collection under the ownership of OVS.

It was only in January that the Italian retailer received approval from the Ministry of Economic Development to acquire the financially troubled Stefanel, but OVS worked through the lockdowns quickly, working with photographic assets and the storied archives.

“We had very clear ideas in terms of positioning and mood, and were able to rely on Stefanel’s storied suppliers and our sourcing capacity,” said OVS chief executive officer Stefano Beraldo, who spearheaded the acquisition.

It was key to modernize and dust off the product, offering a competitive price, he underscored, while remaining faithful to Stefanel’s heritage and preserving the high quality of the yarns. “At Stefanel, good taste is the common denominator,” claimed the executive.

Asked about the timing of the launch and the decision to revisit a storied brand, Beraldo said he believes “the fundamentals are correct, and the market is not saturated in this positioning.” He also underscored that Stefanel has a strong brand awareness, with a solid and positive image, and is “still a label much loved by customers — and its loyal sales force.”

As reported, at the end of last year OVS revealed a capital increase of up to 80 million euros aimed at supporting potential M&A activities.

Beraldo and the brand’s team of designers played up Stefanel’s core knitwear business, offering long cardigans, soft cashmere knits in neutral and warm, reassuring colors, but also with touches of vivid hues, from fuchsia to yellow.

“There are some bolder shapes, as well, inspired by the best of our Italian tradition and some North American brands,” he said, citing cropped tops and quirky sleeves, for example. The focus is on feminine daywear, “effortless” and urban designs, “dressing mothers and their daughters at the same time.”

The new collection will be available at the 30 existing Stefanel stores and the new 30 units in Italy and 20 boutiques outside the country that have been opened by OVS since its takeover. Beraldo said he could not yet provide a precise figure for the investment.

Stefanel stores stand in main cities ranging from Milan, Naples and Venice to resort towns including Capri and Cortina d’Ampezzo. Pink is the main color of the new store concept, which also features details in red and black — a reference to the brand’s logo.

Beraldo and his team have revisited the logo, which is now in red graphics on a black background, not on white as it was in the past, to add “more edge, energy and dynamism,” he explained.

The company has also invested in a new communication campaign portraying women of different ages and personalities, reflecting the new target of the brand. 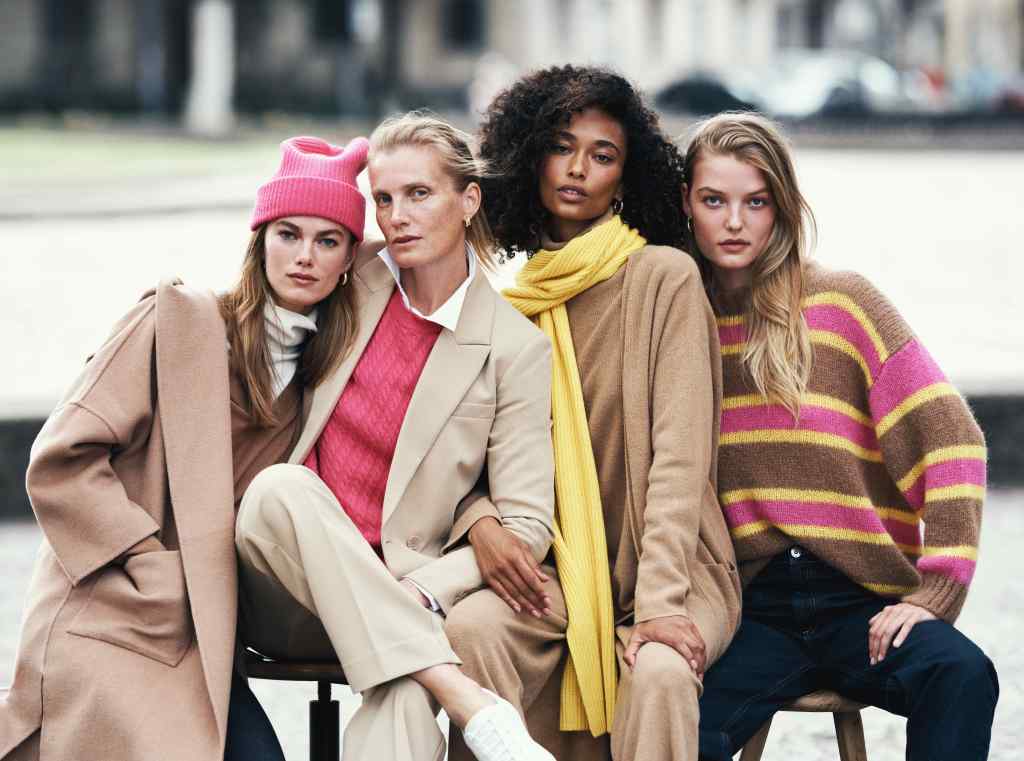 An image from the Stefanel fall 2021 campaign.

While keeping Stefanel’s identity separate from that of OVS, the relaunch of the brand will benefit not only from industrial but also from commercial synergies, leveraging on a multichannel strategy as the collection will be distributed online on a new site.

Retail prices range from 120 euros for a shirt to around 200 euros for a cashmere knit, and from 250 to 300 euros for a wool coat, which is 30 percent less than the tags offered by the brand in the past.

Stefanel was launched in the contemporary market segment in 1980 as the private label of the Maglificio Piave knitwear manufacturer established in 1959 by Carlo Stefanel. After changing hands a few times and a number of financial issues, Stefanel entered a special administration procedure in September 2019, and a year later, the company was delisted from the Milan Stock Exchange amid declining sales, increased debts and a deteriorating economy.

Listed on the Milan Stock Exchange since 2015, OVS SpA — which also includes Upim banners — operates around 1,822 stores globally and reported sales of 1.018 billion euros in 2020. In the first quarter this year, ending April 30, OVS sales totaled 229.6 million euros, up sharply by 123.6 percent compared with the same period last year.