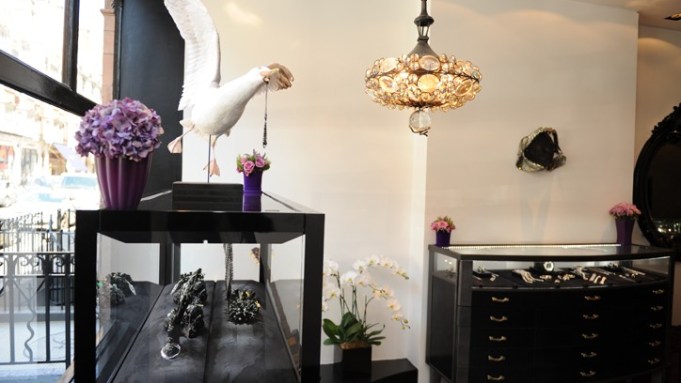 LONDON — British jeweler Stephen Webster has unveiled his flagship at 93 Mount Street in Mayfair and it’s filled with a treasure trove of jewels, taxidermy and curiosities that make up Webster’s world.

“We treated each detail in the store like jewelry,” said Webster during a walk-through of the 1,100-square-foot store, which he designed with British interior designer Kelly Hoppen. “There are lots of things to discover in here. This store, which was bloody long in coming, is actually a journey through the front room of my house.”

The store replaces the brand’s smaller unit on Duke Street.

Located in a 19th-century red brick building, the space is light and airy, despite a dark color palette of slate gray, black, purple and white. Some of the gems are on display in chests similar to Victorian curiosity cabinets. Bold silver rings set with huge gems sit atop organic forms such as black coral and stingray skeletons encrusted with black crystals. Chunky glass chandeliers made of crystal balls look like bubbles suspended from the high ceiling. One wall is coated in Venetian plaster, giving it a metallic effect, while mounted animals carry or hold the jewels. A lifelike seagull perched in the window dangles a silver fish skeleton pendant from its beak.

“I really loved the jaw bracelet and ring,” said Hogg, describing the silver and diamond pieces from the Jewels Verne collection. “I could wear them and still see my tattoos — and I wouldn’t have minded walking out the door with them.”

The central feature of the store is a long display counter made of glass, steel and burgundy snakeskin that encases the designer’s dramatic titanium pieces and fine jewelry collections. The store stocks all of Webster’s collections, including his rock ’n’ roll-inspired silver, gold and gemstones, and the new Jewels Verne line, inspired by Jules Verne’s “20,000 Leagues Under the Sea.”

Terri Eagle, president and chief executive of Stephen Webster, did not give first-year sales projections, but said the store had been doing “phenomenally well,” especially with Webster’s private clients, which includes Madonna, Christina Aguilera and Jennifer Lopez.

The street, which is also home to Lanvin, Marc Jacobs and Christian Louboutin stores, and where Goyard and Carolina Herrera shops will open later this year, is hot property, and rents are said to be 200 pounds to 265 pounds, or $330 to $437 at current exchange, a square foot.

Eagle added the company was in discussions about opening a store on Madison Avenue in New York.

Stephen Webster Ltd. is controlled by Ron Burkle’s Yucaipa Cos., which acquired a stake in the 20-year-old jewelry brand in 2007. Webster is also creative director of the London jeweler Garrard, which is owned by Yucaipa.

Webster has more than 20 boutiques in places such as Seoul, Moscow and St. Petersburg, Russia, in addition to distribution in Neiman Marcus, Bergdorf Goodman and Saks Fifth Avenue in the U.S.