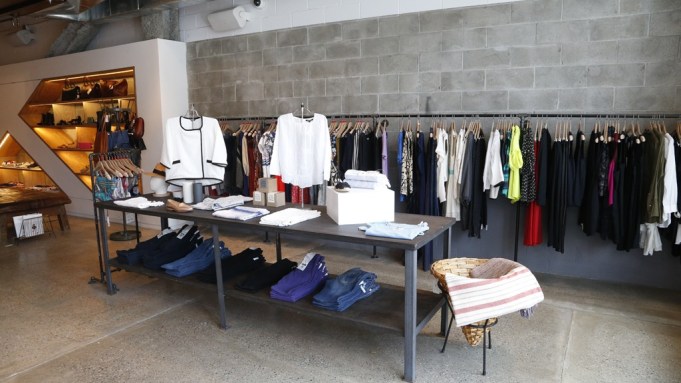 Alan’s company consists of retail, wholesale, e-commerce and a showroom that represents 18 brands in addition to his own line. “We kind of have one foot in a lot of different things,” Alan said. “There was no model for this.”

Alan wants to help the designers he reps grow and open their own stores by advising them and possibly investing in their businesses. He dispenses some advice already, he said.

With 20 U.S. stores, a thriving e-commerce site and a handful of Asian units, Alan’s total annual volume is estimated to be $40 million to $50 million, according to industry sources. Alan, who said the company has logged 30 percent year-over-year growth, declined to comment on sales volume.

For Alan, this is just the beginning. There’s a home store concept to roll out; a kids’ shop-in-shop format to expand — possibly to freestanding stores; watches and optical eyeglass businesses to grow; new categories to introduce, such as performance outerwear, and apparel and international markets to conquer.

About 18 months ago, there were 11 Steven Alan stores. There will be 23 by the end of 2013, with new units opening in Dallas, Chicago and Portland, Ore. The company is looking for retail space in Nashville. Alan won’t open stores indiscriminately. “We could open three to six Steven Alan stores per year,” he said. “Once we’re in the markets we want to be in [we’ll stop]. Certain markets could support two or three stores. There are a lot of places where I don’t think the brand will resonate. We’re not high-priced, we’re not low-priced, we’re very specialized.”

“There is a real growth opportunity inherent on all four fronts. I want to help build what he built up to this point and he’s ready,” said president Trish Donnelly, who was executive vice president of J. Crew’s direct business before joining Steven Alan. “We operate like we’re small. We have a small team that’s really nimble. It’s important that we keep that smallness about us.”

The neighborhood store is diversifying. Home products entered Alan’s Chelsea store here as a test. The first freestanding home store opened in April in TriBeCa. Alan said home units will be rolled out to other major cities. “If we start to see something checking, we’d absolutely jump on it and open stores,” Donnelly said. A kids’ shop-in-shop opened in the home store. “We might move kids’ into apparel stores,” Donnelly said. Alan added that if kids’ stand-alone stores were developed, they’d be merchandised like existing stores, with private label “surrounded by other brands.”

International is a huge opportunity. “International is the place to focus,” Alan said. “The potential outside of the U.S. is pretty great.” The U.K., Scandinavia and other parts of Europe, as well as Japan and South Korea, are on Alan’s radar. In April, Alan opened three stores in Japan. Two are in Tokyo — one in Shibuya, one in Shinjuku — with the third in Osaka. United Arrows also holds a license to manufacture Steven Alan product. Five Steven Alan stores were opened in Korea 10 years ago through a licensing agreement with the Galleria department store.

Two years ago, Alan took on a minority investor, Bedrock’s Tom Kartsotis, founder of watch giant Fossil, whom he calls “my partner.”

Alan’s taste is evident in every product — perfectly proportioned preppy pieces in delicate prints, lace, checks and stripes. Nothing is too precious or serious, and just quirky enough to be interesting.

When Alan chooses to develop a new product, it’s sometimes to fill a personal need. “Steven and I both wear glasses and couldn’t find anything we liked,” Donnelly said.

The Steven Alan Optical collection introduced in April, has its own dedicated Web site. Optical eyewear kiosks bowed inside the home shop in April. Opening this summer will be kiosks in stores in Chelsea, Boston, Atlanta, Brooklyn, San Francisco’s Hayes Valley neighborhood and Westport, Conn. Categories such as shoes and watches are bulking up. “Fragrances and candles could be interesting,” Alan said. “I’d like to get more involved in footwear.” Alan also cited technical outerwear and sports-related apparel as new areas.

Alan’s family was in the jewelry business and he grew up attending accessories shows. Alan was never formally trained, but he always loved fashion design. When he couldn’t find something in the market, he set about creating it. “I couldn’t find men’s apparel for the store with an American sensibility,” he said. “Everything was streetwear or formal. I started making things for the store and the buyers said, ‘Why can’t we buy your line?’”

Many of the products Alan buys for the stores are connected by six degrees of separation. Candles are made by a friend of Clare Vivier, who designs handbags and small leather goods and is a core resource of Steven Alan.

“Everything has a story,” Alan said. “Someone knows someone. We do a lot of collaborations with different brands such as Nike, Levi’s, Dockers and Uniqlo. We design something only when we can be sure it will be great.”

“The company flies under the radar in a really good way,” said Donnelly. “It’s a slower ramp up it’s but more organic.”