Stitch Fix's mixed results sent shares down 4 percent. But the future lies in initiatives like direct buy and collaborations.

The last few months have been tough for fashion retailers, and the breadth of those challenges is starting to snap into focus as operations like Stitch Fix report their results covering the period.

Over its fiscal third quarter, the online styling service on Monday reported a net loss of $33.9 million. Net revenues, which landed at $371.7 million, were a decrease of 9 percent over last year, and a big miss on expectations of $406.7 million.

The results overshadowed other details, like 9 percent year-over-year growth in active clients to 3.4 million, and $498 in net revenue per active client, representing 6 percent growth. Yet the news was enough to send shares down 4.45 percent in after-hours trading.

But for Katrina Lake, Stitch Fix founder and chief executive officer, those details matter — especially in times of a health and economic crisis. “In a time period where the broader apparel and accessories market saw sales decline 80 percent, we delivered $372 million in net revenue and expect a return to positive growth in Q4,” Lake said in a statement.

Indeed, what’s happening at Stitch Fix is symptomatic of the much larger problem that has been plaguing retail, especially apparel merchants — from coronavirus lockdowns to looting and serious economic conditions that have put less discretionary income in Americans’ pockets.

Notably, Stitch Fix’s results arrived on the same day that the National Bureau of Economic Research officially declared that, after 128 months of economic expansion, the U.S. is in the throes of a recession and has been since February.

During the past few months, e-commerce generally has fared better than brick-and-mortar. For Stitch Fix, which is often taken as emblematic of digital’s disruption of traditional retail, its performance matters as a potential sign of where the e-tail sector stands and where it’s going.

From the looks of it, Stitch Fix’s results are perhaps not as dire as they could have been. But it’s also not clear how long its recovery will actually take, regardless of the ceo’s optimistic view. Because apparel retail’s outlook is subject to change according to domestic and global events, as well as emerging policies. These influences are not only unclear right now, but they’re also outside of the company’s control.

Still, Stitch Fix’s optimism is worth noting, if simply for the fact that it points to its moves ahead of and during these challenging times — such as cutting 1,400 stylists in California and pursuing plans to hire as many as 2,000 stylists in more affordable regions, such as Austin, Tex., and Minneapolis, among other places.

Stitch Fix is also very bullish on its prospects for building out its business. The company’s original model involved shipping out boxes of preselected merchandise chosen by a combination of artificial intelligence systems and human stylists, with subscribers’ choices in keeping or returning items informing future selections. Now Stitch Fix clearly sees its direct-buy business as a key factor in its future success.

The initiative has been a key talking point for several earnings periods now, and Monday’s call was no exception.

Elizabeth Spaulding, the company’s recently named president, shed some light on how the company aims to evolve direct-buy. The changes range from developing new interface elements to showcase a new “trending for you” area this month — with the section showcasing “hyper-personalized looks” based on subscribers’ profiles — to collaborations that feature exclusive brands and collections, she said. 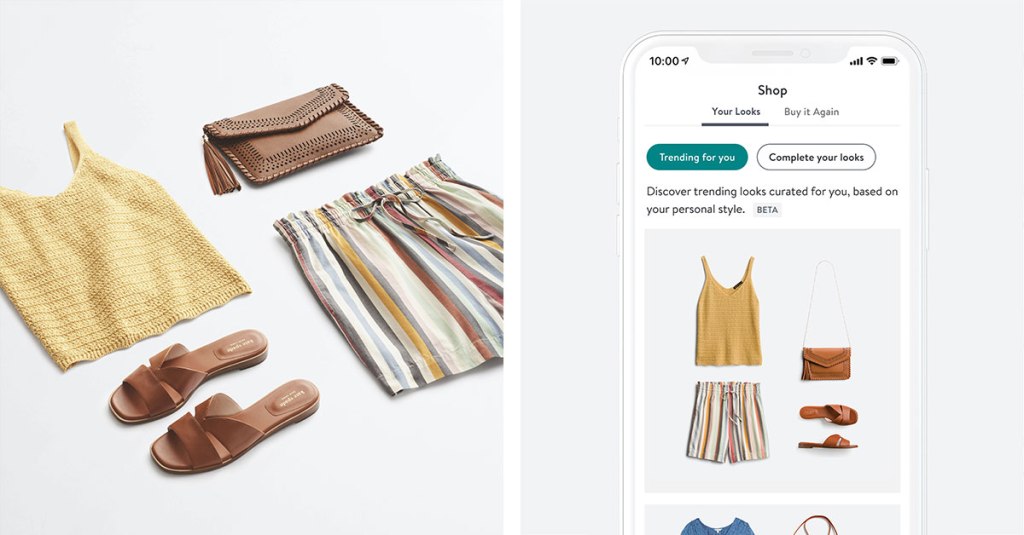 A look at Stitch Fix’s “Trending for you” area.  Courtesy of Stitch Fix

One such collection is an upcoming line from influencer Katie Sturino. Spaulding elaborated that the range emphasizes inclusive looks and gives the platform the opportunity to feature shoppable outfits styled with inventory from Stitch Fix’s “broader inventory pool.” Such initiatives, she said, allow the company to loop in “clients who have historically been on the fence.”

In comments provided to WWD, Spaulding further clarified the direct-buy business’ crucial role in the company: “Direct buy represents a step-change in our ability to further penetrate our addressable market and expand the way we serve our clients. We’re very encouraged by its early success — revenue more than tripled quarter over quarter — and are rapidly expanding the offering.” Its evolution covers moves like recently unlocking non-subscribers’ ability to shop Stitch Fix without a previous shopping history.

As for whether these initiatives will be enough to harden the business against whatever comes next, that remains to be seen. But Stitch Fix executives remain hopeful and, during these unprecedented and uncertain times, noticeably confident.

“We were built for this time, we were built for having the balance of growth and profitability over many years,” Mike Smith, president, chief operating officer and interim chief financial officer, told WWD following the call. “Having the strength of the balance sheet that we have really allows us to invest in things like direct buy, like the U.K., and we’re doing it in an environment where most other retailers are not investing. And so we believe strongly that [for] the shift that’s happening — and, we think, will continue to happen — for the next 12 to 18 months, from offline to online, we’re poised to capture a lot of that market share.”

The company figures that that’s an estimated $30 billion in the coming year at stake.

“It’s going to shift, because it’s just a better way to shop,” he continued. “I think the shopping environment for people going forward won’t look the same. And we’re excited to be able to take a lot of that share as it shifts more online.”