The two sisters at the company's helm are their own target customers.

Stoney Clover Lane in April will unveil its third store, and first Manhattan location, a 1,000-square-foot unit at 376 Bleecker Street, opposite Love Shack Fancy and near the storefront Thakoon Panichgul in October unveiled for his reimagined collection. With stores in Palm Beach, Fla., and East Hampton, N.Y., Stoney Clover Lane has updated organization with its simple, candy-colored and customizable travel accessories, and plans to open two to four more stores this year.

Reaction to a pop-up shop at 42 Prince Street in Manhattan’s SoHo that opened in mid-November and will operate through the end of February gave Stoney Clover Lane the confidence to lease a permanent space.

With sales in the high seven figures, and year-over-year growth of more than 400 percent last year, according to Glazer, the brand has amassed a loyal following that checks its web site and Instagram regularly for new products such as the  Cozy faux fur line of totes and duffles, $188 and $228, respectively.

The Palm Beach unit at Royal Poinciana features a customization bar that looks like it’s made from driftwood with a lilac surfboard hanging on a pink and white cabana stripe wall.

Very pink, but not cloying, is how Kendall Glazer described the Bleecker Street store, which will feature Assouline coffee table books, displayed on, yes, coffee tables. “We sell a lot of third-party products,” said Glazer, who, with her sister Libby, founded the company. 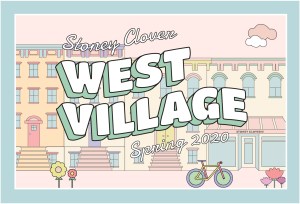 Stoney Clover Lane’s West Village post card will be turned into a patch when the store opens.

Consumers will take a seat at the customization bar to embellish with initials or patches items on their own or with the help of a sales associate. They won’t be at a loss for inspiration with examples of every bag style pre-patched. “The walls will be like our Instagram come to life,” Glazer said. “People see colors and patches they didn’t think of.”

Between the hundreds of patches and 175,000 three-letter monogram options, there are myriad possible permutations. “You can customize anything from our product assortment into something uniquely your own,” Glazer said.

Love Shack Fancy x Stoney Clover Lane, featuring the former’s vintage-inspired romantic floral patterns, and the latter’s products, ranges in price from $72 for a flat nylon pouch to $216 for a nylon duffle bag; however, eight of the 11 items are sold out. The two brands will partner again in the summer.

Stoney Clover Lane tapped Lele Sadoughi for scrunchies, $32 for sets of three, each with a large pearl, and headbands with top knots in 16 colors, plain or decorated with all-over pearls and shells, $44 to $49.

Jeweler Stephanie Gottlieb‘s second collaboration with the brand includes a bicast leather travel jewelry case for $145, that initially sold out and was reissued as a one-time limited quantity re-release. Glazer said to expect more collaborations with other brands.

Kendall and Libby Glazer in 2009 began making beaded bracelets while attending Tulane University, launching Stoney Clover Lane from their dorm room floor. “We were using social media and influencers before we even knew what influencers were,” Glazer said. “What started as a hobby turned into a business.”

Quick to tire of trends, the sisters frequently introduce new items. “As soon as we were over the bracelets, we moved on,” Glazer said. “When we get tired of a bag, we phase it out. That keeps things fresh.

“Part of our success is that every product is something Libby and I want and love. And it’s instantaneous, when we think of something, we don’t want to wait,” said Glazer, noting that the company turns products around rapidly with pieces made in China and assembled in New York.

While there are vacant storefronts on many Bleecker Street blocks, Brandon Charnas, cofounder of Current Real Estate Advisors, which represented Stoney Clover Lane in the Bleecker Street deal, said, “A new generation of shoppers is enjoying the retail experience in a new way at stores such as Nadaam, Rothy’s and Margaux. They interact online, then go visit the store. Sales figures are up, and so is foot traffic.”