Retailers Saks, Bloomingdale's and Macy's are off to an early start with deep sales, ranging from 50 to 80 percent off merchandise. 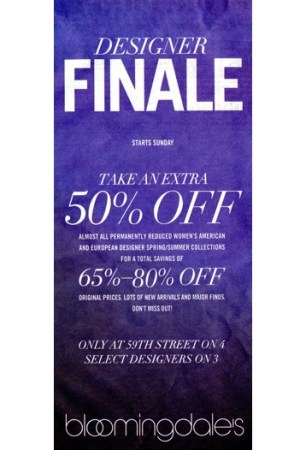 Auctioning One-of-a-Kind Designer Denims, for a Good Cause

Summer sales at retail appear to be deep and early.

Key department and specialty stores held weekend promotions in which spring and summer merchandise was reduced 40 to 80 percent.

Store executives and industry analysts said the markdowns seem to be slightly bigger and earlier, emblematic of a period when retailers fear consumers won’t go back to paying full price. The markdowns come after dismal June same-store sales and as retailers focus on lean inventories.

Bloomingdale’s Designer Finale sale, which started Sunday, offered an extra 50 percent off almost all permanently reduced women’s American and European designer spring and summer collections for a total savings of 65 to 80 percent. A silver lace Moschino dress, for example, was marked down from $1,790 to $644, then reduced 50 percent to $322.

“Since the holiday season, we’ve been in a new environment where promotions are steeper than in past but inventory levels are leaner,” said Dana Telsey, chief executive officer and chief research officer of Telsey Advisory Group. “Consumers of all income levels are looking for promotional prices. There’s a new way of shopping and a new way retailers are having to execute. The high-end customer is responding to discounts, too. We’ve seen a change in the temperament of all consumers, and retailers continue to adjust.”

A retail executive, who asked not to be named, said the level of discounts is the same as last year — however, some stores held sales earlier. “We don’t know how it’s going play out,” the executive said. “You saw all the numbers [June comps]. I don’t think they’re any surprises there. The upscale business remains difficult….All we can do is stay focused on the business.”

Another retail expert, citing the intensity of the discounts, said they are “so much more centered on the Northeast, for department stores in particular got killed last month with all the rain. I also think inventories are still on the high side, though stores have been working them down. I would say that, overall, the discounts look pretty steep, — more so on the high end.”

Terry Lundgren, chairman, chief executive officer and president of Macy’s Inc., said in May that “most retailers got inventories in line with sales. As long as that’s the case, there is no need for crazy discounting….Our inventory is where we want it to be.”

Asked if the price cutting at the time was any deeper than a year ago, Lundgren said, “Price promoting at Macy’s is very similar to last year. Bloomingdale’s is slightly more.”

Sales in July are “a continuation of what we saw in June,” said Joseph Feldman, a managing director and the senior research analyst at TAG. “June was pretty heavy [in terms of] discounts. From a consumer perspective, it feels very promotional, and there are a lot of choices out there and lots of merchandise.”

Once inventories get sufficiently lean, Feldman said, consumers will have to adjust to paying full price again. “That doesn’t mean it’s going to happen any time soon,” he added.