The push by vendors and merchants to create exclusive brands has raised the cost and risk of doing business on Seventh Avenue. 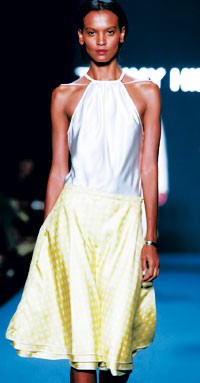 NEW YORK — With designers sending the last of the American collections down the runway today, retailers in the front row will be plotting how to use the new styles to differentiate their stores from their competition, who most likely will be sitting just a few seats away.

Stephen Ruzow of Kellwood Co. described it as a “tidal wave,” and George Jones of Saks Inc. said, “I absolutely see it continuing.”

Designers and brands have always sought a distinct look, but department stores in the last decade or so became homogenous as larger firms played it safe to avoid bottom-line stumbles. Now stores throughout the fashion spectrum are breaking their cookie-cutter molds in hopes of improving full-price sales and increasingly turning to major vendors, such as Kellwood, Jones Apparel Group and Liz Claiborne Inc., for exclusives and their own versions of major lines. Additional brands, marketing and design staff all spell increased expenses for vendors.

“Everyone’s talking about it because they have seen the success of J.C. Penney’s and Federated [Department Stores],” said Smith Barney equity analyst Deborah Weinswig. “It’s the hot topic in the department store space these days.”

Penney’s has stepped up its merchandise assortment through exclusive distribution agreements with brands such as Bisou Bisou, as well as Parallel with BCBG Max Azria Group. The retailer posted positive comparable-store sales for 10 of the last 12 months. Federated, which is recognized as a private label leader with its I.N.C. brand and has an exclusive on H Hilfiger this year, has posted positive comps during nine of the last 12 months.

May Department Stores Co. and Kohl’s Corp., both of which have taken steps toward more differentiated product assortments, but are generally seen as lagging their competition in the area, had negative comps for seven and eight of the last 12 months, respectively.

The often ultra-fashionable set populating the tents might tend to discount the importance of J.C. Penney or Kohl’s, but many of the pressures squeezing the lower-priced stores are being felt throughout the industry, including at stores such as Neiman Marcus and Saks Fifth Avenue, which are also looking to differentiate their product assortment. Besides, as Karl Lagerfeld has shown at H&M and Isaac Mizrahi at Target, the barriers between the various price points are at the very least bending significantly.

The migration to more differentiated product and the accompanying financial demands might also make survival more difficult for the hopeful young designers just being introduced to the fashion world at the tents and various other venues around the city. The road they have to travel to stardom might be rockier than the one traveled by their forerunners, many of whom now preside over expensive and lavish shows that are out of the reach of newcomers.

“It [product differentiation] limits the entry of new designers and new companies into the market,” said Andrew Jassin, managing director of the fashion consultancy Jassin-O’Rourke Group.

More than just raising the barrier to entry, the march toward diverse assortments has forced big changes in some of the industry’s most established firms, such as Liz Claiborne, which has proven itself to be nimble when it comes to adjusting to the shifting landscape.

The Liz Claiborne collection for spring 2004 was consolidated from four subbrands into one master label. Much of the design staff from the eliminated subbrands was set to work on different takes on the better-priced line for specific retailers. At the same time, Claiborne was bolstering its better assortment, launching its Intuitions collection exclusively at Dillard’s. Claiborne’s other exclusive deals include Crazy Horse for J.C. Penney, First Issue and the new Curve for Sears, as well as Axcess and Villager, which are sold only in Kohl’s and Mervyn’s. As these businesses have ramped up in recent years, their growth has helped offset declines elsewhere in the portfolio.

However, the core Liz business generally has lower selling, general and administrative expenses than the company at large, noted the firm in its annual report. “Given that fixed costs represent a large percentage of this business’s SG&A expenditures, as the sales of this business have declined, its SG&A rate has increased. Moreover, as this business represents a lower proportion of overall company sales, the company’s overall SG&A rate increases.”

Claiborne’s SG&A rose 16.1 percent to $1.42 billion last year, due to the acquisitions of Juicy Couture and Enyce, start-up costs to bring Mexx to the U.S. and Sigrid Olsen to specialty retailing, and overall costs related to growth.

“At the end of the day, it costs a lot more to do business today because the stores want exclusive product,” said Ruzow, who is president of women’s wear at Kellwood, overseeing brands such as Sag Harbor and the licensed O Oscar. “It’s going to be much more demanding on the manufacturer to constantly come up with new labels and new product offerings.”

Kellwood’s SG&A rose 10.2 percent last year to $357.6 million, primarily due to the Briggs and Gerber acquisitions, which added $18.6 million, and spending on new brands and marketing initiatives of $17.9 million.

Likewise, Lynne Coté, group chief executive officer of women’s moderate sportswear at Jones Apparel Group, noted: “We’re having to spend our resources to support the design needs of 12 brands instead of four brands because everyone wants their own. I’m now making 2,000 samples a month just to get to market, where I used to make 150.”

Jones relaunched A|Line, a secondary Anne Klein label it acquired along with Kasper A.S.L., exclusively into 450 Sears stores for fall and Kellwood produces the Lucy Pereda collection for the retailer. Should those lines remain exclusive to Sears, their distribution will be restrained to the retailers 870 full-line stores.

As retailers rely more and more on exclusives from large vendors, strengthening the “one-stop shopping” stance taken by most of the big firms, there are fewer open-to-buy dollars — the amount store buyers can spend without special approval — for the open marketplace.

Smaller vendors, which don’t have the scale necessary to produce numerous lines, often have to carefully tweak one line for different customers to keep growth up.

Launched in plus sizes last year, the line is expanding into misses’ and petite sizes for spring and is slated to bring in wholesale volume of $20 million to $25 million next year.

To offer the necessary variety, the firm produces more than 500 pieces for the line and is willing to give some of those looks exclusively to certain retailers. The brightly colored collection will be expressed differently in the stores through various jacket and pants silhouettes, prints and layering pieces.

At the Saks department store group, which includes chains such as Proffitt’s and McRae’s, differentiated products make up about 35 percent of the division’s $3.62 billion in annual sales. That compares with under 20 percent three years ago, when George Jones took to the helm as president and ceo of the division. The division registered comp increases during 11 months of the last 12.

Specialized products from branded vendors have increased to almost 20 percent of the Saks department store group’s business, or $724 million, up from under 9 percent three years ago.

The specifics might differ, but the trend is being repeated among the major retailers.

“Everybody recognizes the need to be different,” said Jones, who stressed that vendor brands are still an important part of the mix.

Also playing into the mix is the pressure exerted on the vendors by the stores’ private label programs, which have grown in importance and are a clear statement from retailers that they want differentiation and are willing to do it themselves.

“The vendors have wanted to find a way to break out some of their own brands or to realign them,” said David Griffith, equity analyst for Tradition Asiel Securities. “You’ll always have a few [big brands], but I do think we’re to the point where both the vendors and retailers realize that if you have a brand in 2,000 doors, it’s just not that special anymore.”

Susan Ng, equity analyst for Sidoti & Co., agreed that the lines coming out will probably end up being smaller than their forebears. Ng said, “It probably would make [the market] a little bit more fragmented in the sense that there are many more brands that I would expect to come out.”