Stores Line Up for Dems and Dubya

Department stores such as Bloomingdale’s might be akin to Switzerland this week when it comes to politics, but not all retailers are claiming neutrality. 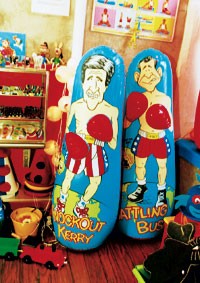 NEW YORK — Department stores like Bloomingdale’s might be akin to Switzerland this week when it comes to politics, but not all retailers are striking such a neutral chord.

Macy’s is selling products such as George Bush talking dolls with nary a John Kerry bobble head in sight. Meanwhile, downtown, where merchants are wearing their political stripes on their sleeves, the prevailing sentiment can be summed up by the message on a doormat in a NoLIta store that reads, “Boot Bush.”

While Bloomingdale’s in the past has tied in with Broadway musicals, blockbuster films, New York City milestones and historic events, the store is slighting the Republican National Convention. “We’re not selling any merchandise with political messages, nor do we have any special events planned surrounding the RNC,” said a spokeswoman.

Macy’s Herald Square flagship, on the other hand, is welcoming delegates with open arms. Overhangs above the main entrances on Broadway and on West 34th Street are dressed in red, white and blue. In two West 34th Street windows, mannequins dressed in patriotic clothing hold placards with the names of states.

A live Statue of Liberty in the basement greets shoppers with “Hello dahling” in her best New Yawk accent. Down the corridor, talking dolls spew words of wisdom from past presidents John F. Kennedy, Ronald Reagan and Bill Clinton, as well as President George W. Bush. The Bush Talking Action Figure wears presidential cowboy boots, has a furrowed brow, prominent ears and utters 25 unique phrases, including non sequiturs such as “My call to you is if you want to fight evil do some good.”

“There aren’t any products referencing John Kerry,” said a Macy’s spokeswoman. “The dolls are presidential, and he’s not president.”

Asked whether Macy’s favors a particular candidate, the spokeswoman crisply answered, “No.”

Delegates shopping in the store lamented the dearth of merchandise commemorating the convention, although the store had a variety of red, white and blue T-shirts and memorabilia emblazoned with New York icons.

“We’re very strong Republicans and we haven’t found any souvenirs that commemorate the RNC,” said Delores Hinton of Louisiana.

“The only place we found anything was at Tavern on the Green,” added her daughter-in-law, Leigh Ivey. “We bought shirts and ties with elephants.”

But if Macy’s is celebrating the Republicans, the Welcome Wagon isn’t out for them downtown.

Along with the “Boot Bush” doormats at Daily 2.3.5. on Elizabeth Street, proprietor Jasmine Krause devotes an entire table to anti-Bush buttons, Dum Gum and National Embarrassmints with a photo of the President wearing a confused expression.

Krause’s supply of 2,000 bumper stickers that read, “Bush: Bring back Monica Lewinsky” sold out in one day. She said she sold 100 units of a $30 George Bush punching bag. The John Kerry version had only two takers.

“I feel strongly about politics, but it’s also good for business,” said Krause, who moved here from Russia 25 years ago and is a U.S. citizen. “We have pro- and anti-Kerry items, but Kerry doesn’t sell so well. Bush sells much better.”

Charles Branstool, owner of Exit 9 on Avenue A, became an activist after the 2000 elections when George Bush was, as he said, “appointed.” The gift emporium, which opened in 1995, carries children’s T-shirts by Brooklyn artists that read, “Kids for Kerry,” “Babies Against Bush” and “Bush is a Tush.” Proceeds go to MoveOn.org, an organization that is funding TV commercials in support of John Kerry with online contributions.

One of the most popular items at Exit 9 is a car air freshener called “George Bush’s Dumb Ass Head on a String.” “The election category has really grown for me,” said Branstool, whose father was the Ohio delegate who cast the vote that put Clinton over the top in 2000.

Exit 9 also sells items that poke fun at big business, raise awareness of genetically modified food and support the environment. The store’s Web site has a section called Social Commentary with links to groups such as True Majority Action, a grassroots, nonprofit advocacy organization that is supporting Kerry.

Stephane Gerbier, owner of YoYa-Mart on Hudson Street, a store that caters to the parents of trendy city kids, is a Kerry supporter. But he doesn’t want to shove his views down his customers’ throats. Gerbier simply wants to encourage like-minded shoppers, who mostly live in the neighborhood, to vote. His plan is somewhat disingenuous since most of his customers — artists, members of the intelligentsia and young executives — tend to be Kerry supporters.

“Vote,” a book for children ages six to 10 by Eileen Christelow (Houghton Mifflin Co.), is featured prominently in the store. YoYa-Mart also sells a School House Rock DVD about the Bill of Rights.

Gerbier stressed that consumers of all political persuasions are welcome at YoYa-Mart.

“I’d be glad if Republicans came to visit the neighborhood,” he said. “They have good money, too.”