Fueled by a $4.3M round of Series A funding led by General Catalyst Partners and eVentures, the online fashion start-up is officially launching a collection. 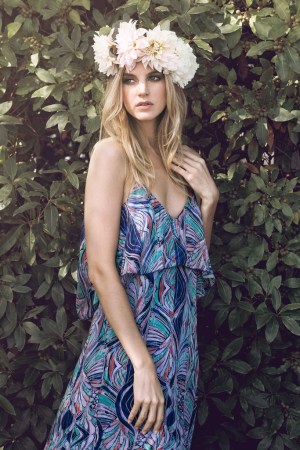 Two years ago, Allison Beal and Brian Garrett set out to build Los Angeles fashion start-up StyleSaint based on content, community and commerce. They’ve got the content and community parts of StyleSaint in place, now the commerce part is coming into play.

This story first appeared in the August 14, 2013 issue of WWD. Subscribe Today.

Fueled by a $4.3 million round of Series A funding led by General Catalyst Partners and e.Ventures, StyleSaint this week is officially launching an apparel collection priced from $30 to $200 with maxi- and minidresses, sleeveless blouses, camisoles and skirts featuring water and mosaic prints, and silk chiffon and satin. Developed with information gathered from StyleSaint’s community members, the 18-item collection will roll out in weekly cycles with six new items offered a week, and future collections will be introduced roughly every six weeks.

“I’m really trying to serve the girl who wants to get dressed up for everyday. I love fashion and want to look good, but I don’t want to spend more than 20 minutes on it,” said Beal, who was vice president of business development at Scandinavian design house Linq Agency prior to cofounding StyleSaint. “It’s the core of your closet, clothing that looks dressed up, done and designed, but not that you tried so hard. It’s like Isabel Marant with the dressed-up, relaxed look, but not so French and embellished, more rocker.”

Beal keeps a close watch on trends in colors, fabrics, silhouettes and accents that are important to StyleSaint’s community and uses that information to guide the design process. “How do I take this giant conversation and turn it into something that’s merchandisable and consumable?” Beal said she asks herself. “What I started to do is blend the two worlds of what’s trending and themes people are loving, and I apply it to silhouettes that can fit many body types. We’re doing XS, S, M, L, things that flatter a woman’s body. I figure out what’s good for the current season. We sell product people want to wear now. I curate down to themes that are relevant to the season and defensible at prices that only we can offer because we’re cutting out the middle man.”

StyleSaint is initially concentrating on its community as potential customers for the apparel. There are three levels of community participation on StyleSaint and about 120,000 subscribers to its digital magazine. Some 45,000 users make their own so-called StyleBooks that can be shared on blogs and various social media networks. A much more limited group of 420 people constitutes StyleSaint’s editorial team. Beal noted the magazine readers are generally from 24 to 38 years old, and those who make StyleBooks are mostly 17 to 28 years old. About 17 percent of StyleSaint’s audience is international.

“Any girl can publish a beautiful picture on our platform. It doesn’t matter what language. Fashion is a global language. The magazine is supposed to be the distillation of everything happening in the community, and Allison is putting a visual lens on it for us to deliver in a short-form, image-driven piece of media twice a week,” explained Garrett. “The absolute size is not that material. We don’t want millions of people being editors. We like a small select group of girls who care about their roles in marketing StyleSaint. We look at it and say, Pinterest has millions of users. We don’t really want that. We want a small group who identifies with Allison and, hopefully, that group and a group beyond that want to purchase the products that are the manifestation of the [StyleSaint] conversation.”

With assistance from Brian Weitman, a cofounding adviser at StyleSaint and chief executive officer of L.A. garment construction material supplier STC-QST, StyleSaint is manufacturing its apparel domestically in the same factories that handle work for The Row, James Perse and Vince, according to Garrett and Beal. Profit margins on the pieces will run 50 to 70 percent. For its first year on the market, Garrett doesn’t expect StyleSaint’s apparel to cross $1 million in revenues.

“This is very much about getting it right before hitting the accelerator. We want to keep it lean and mean until we prove we have a business,” he said.

Garrett, who is cofounder and operating partner at L.A. venture capital firm Crosscut Ventures, compared StyleSaint, which has raised a total of $5.8 million in funding, to Nasty Gal, ModCloth and Warby Parker. “We’re going after a totally different aesthetic, but we can take elements of all of them. We do not want to build an ad-supported media business. We didn’t want an affiliate commerce, click-to-buy platform,” he said. “She [Beal] wanted to design a brand. We need a smaller user base [that engages] with regularity. The equity of the brand comes from the authenticity, the quality of the craftsmanship and the way people interact with the product.”

Brick-and-mortar distribution could enter the picture for StyleSaint. “We have a great active young community of people and that’s desirable for retailers,” said Beal. “We won’t change the value that we provide to the customers, though. I don’t ever want to increase our price 250 percent just because we had to sell in a store. For me, it’s about how we do create value to the consumer and bring them along this process so they can benefit from it. It’s not disposable fashion. It’s products they love and feel connected to because of the story behind them and at prices they like.”