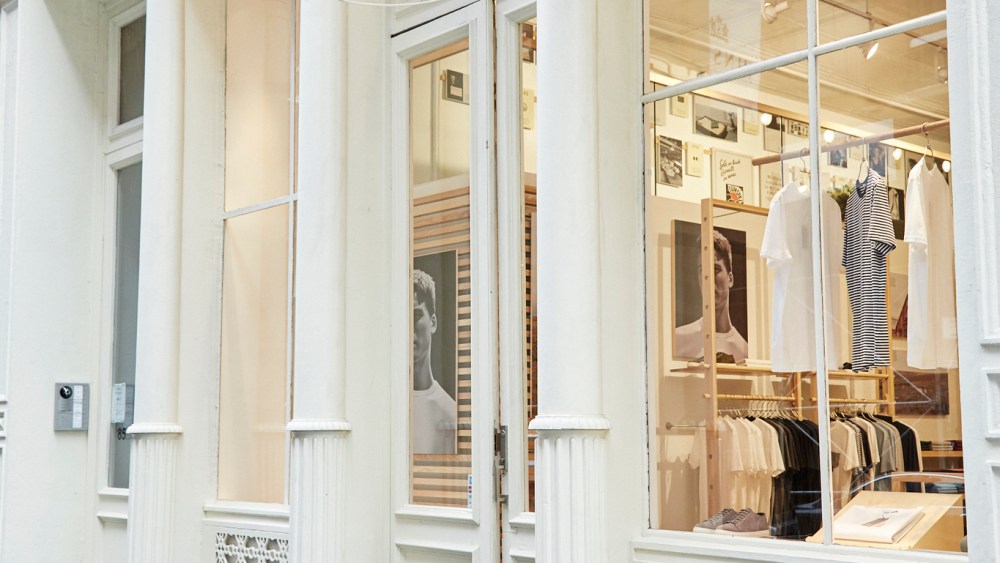 NEW YORK – It took nearly 160 years, but Sunspel has finally opened its first store in the U.S.

The U.K. heritage brand, which was founded by Thomas Arthur Hill in 1860, this weekend had a soft opening of a 1,025-square-foot store at 85 Mercer Street in SoHo here. The grand opening is slated for Sept. 20.

Although this is its first permanent location in the States, the brand has a long history in America, especially in New York, according to Nicholas Brooke, Sunspel’s chief executive officer. “We’ve been stocked in Barneys since the 1950s, we’re in Saks and other top independent wholesale accounts,” he said. “But after opening stores in the U.K., Europe and Japan, we felt now was the time to open in the U.S.”

Sunspel operates five stores in the U.K., one in Berlin and one in Tokyo.

The company chose SoHo, Brooke said, because many of its existing customers either live downtown or shop there. “We felt like it was a natural place for us to be,” he said.

“In Marylebone, Notting Hill, Tokyo’s Shibuya and Mitte in Berlin, our stores have all had a community-oriented feel with a global sensibility,” Brooke said. “SoHo offers Sunspel the best of both worlds — a neighborhood feel with the popularity, traffic and interest of a major international shopping district.”

The store offers a little more than 60 percent men’s and 40 percent women’s wear. Since the soft opening, Brooke said the results “feel positive. We had a lot of people come through the store.” Some 50 percent of them were already familiar with the brand while the other half were new to the label.

Early top sellers include T-shirts, polos, sweats and knitwear along with casual lounge products, a hallmark of the Sunspel brand.

Brooke said that unlike other stores in the fleet, the New York unit has added a number of elements intended to speak to the brand’s long history. Tables and fixtures are made of English ash, and there are photos of England’s natural landscapes and Sunspel’s factory in Long Eaton. The 100-year-old floors have been restored to their original condition and on the second-floor balcony, there’s a timeline showcasing the brand’s history alongside its signature products and fabrics.

Sunspel luxe T-shirts, English boxer shorts and Riviera polo shirts, which were first designed for Daniel Craig’s James Bond in “Casino Royale,” are all on display along with the “unique fabrications we’ve invented,” Brooke said.

“The store is also more interactive,” he continued, “which is important as you go into a new market. So this is much more interesting than a regular store.”

Brooke said there are no plans to add other stores in the U.S. at this point, but that may change. “We will take the temperature in New York and then see what might be available,” he said. “My instinct is that we will open more stores in the U.S., but it’s just a matter of finding the right space.”