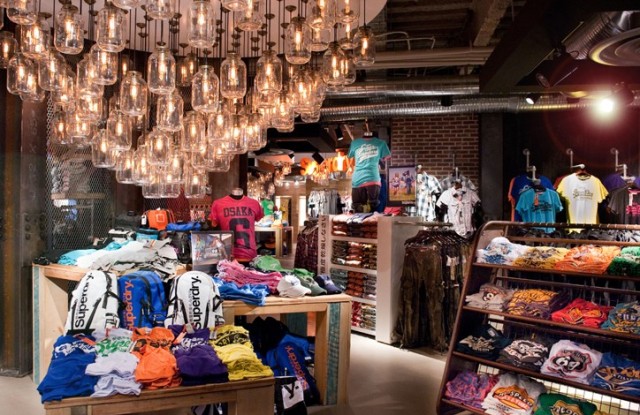 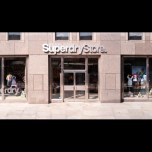 Superdry’s U.S. rollout is continuing with the opening of its second New York City store, at the South Street Seaport, today.

The U.K.-based apparel brand, which operates 120 stores worldwide, has taken a 4,500-square-foot space next to Abercrombie & Fitch, on Water and Fulton Streets, for its eighth store in the States.

“What we loved about this space,” said Michael Martens, president of Superdry USA, “is that we have 140 feet of frontage. The brand is still new to the States, so this gives us the opportunity to get our mannequins and our branding out there for all the people walking by. We want to make a compelling statement.”

Martens said the company chose the Seaport for its draw of domestic and international tourists as well as area residents drawn to the outdoor events and restaurants. “It’s important to be in those perfectly balanced areas,” he said.

The store features the brand’s jam-jar chandelier inside the front door, but on a larger scale than in other U.S. stores, with 120 jars as compared with 40. “It’s a showstopper,” Martens said.

Other design features in this unit include exposed ceilings, raw steel beams, vintage Pennsylvania barn wood, reclaimed railroad ties from the U.K., poured concrete floors and other elements designed to provide an industrial feel. Unique to this store are large orange Superdry logos at both entrances and an expanded number of fixtures positioned to “make the shopping experience like a journey,” Martens said.

He declined to provide a volume projection for the unit but said since the soft opening last weekend, sales have been brisk, with the brand’s signature vintage-inspired T-shirts, which retail for $30 to $34, and flip-flops for $16, among the early bestsellers. “The lower price point merchandise is selling,” he said. “It’s a great way to enter the brand.”

Martens said Superdry will open a store in the Mall of America in Minnesota in the third week of July, followed by a unit on the Third Street Promenade in Santa Monica, Calif., in the fourth quarter. “We’re working on a couple of other leases as well,” he said, including Boston, Chicago and an additional New York location. “We’re looking at international cities and international streets,” he said.

A grand-opening celebration is being planned for the South Street Seaport store on July 13.

Founded in 2003 by James Holder and Julian Dunkerton, Superdry Clothing launched in Cheltenham, England, as Laundry Athletics before opening its first store under the Superdry name in Covent Garden, London, in December 2004. It granted a license in 2009 to SDUSA, a division of Sunrise Brands LLC.