The store is the U.K.-based retailer's largest in North America and third in New York, following Broadway in NoHo and South Street Seaport. 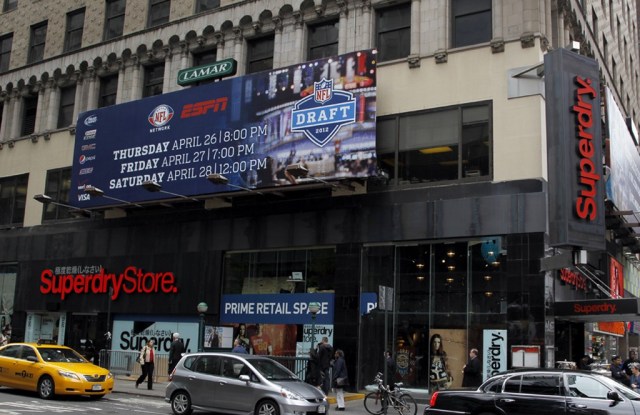 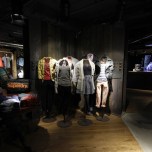 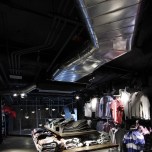 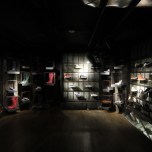 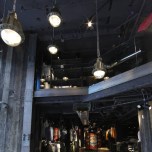 NEW YORK — Superdry is jumping headlong into the bright lights of the big city.

The U.K.-based specialty store retailer will today open its largest North American unit to date at 49th Street and Seventh Avenue in Times Square. The 14,000-square-foot store is the company’s third in New York, following Broadway in NoHo and South Street Seaport. A location on 58th Street and Lexington Avenue is scheduled to open in August.

He said the store, which will be open from 9 a.m. until 1 a.m. daily, will “capitalize on the late-night Broadway theater crowd” as well as the hordes of tourists and New Yorkers who walk through the area every day. The exterior will include a lit-up, rotating, 18-foot Superdry sign as well as an LED board that will continually run the company’s marketing campaign images. “We want to draw people in,” he said.

In an exclusive walk-through, Martens said this is the company’s first two-story location in the States and, as such, features a dramatic steel and concrete staircase to lead shoppers from the 4,000-square-foot selling space on the lower level to the 7,000 square feet on the second floor. Men’s and women’s wear will be co-merchandised on both floors, and there will be banks of video screens on both levels, a merchandising technique that was pioneered at the Superdry global flagship in London.

“Twelve weeks ago, this was two restaurants,” said Charles Turlinski, chief executive officer of Sunrise Brands, the company’s U.S. licensee. “I’ve built 600 stores in my career and I never thought this would be ready in time. But it is.”

Turlinski, who joined Sunrise Brands in 2009, spent 11 years at Limited Brands. Sunrise, formerly the Tarrant Apparel Group, also holds the license for American Rag, and produces private label for companies including Express and Chico’s. It also produces the denim for Isaac Mizrahi as well as a new upscale outerwear brand, GET.

In addition to the company’s signature oversize jam jar chandeliers, the Times Square store will feature a number of new design elements, including an industrial bomb-light chandelier made from British factory lights salvaged from the Forties, cubby-style cabinets to house the company’s denim offering, mannequins inside glass vitrines to showcase premium product, as well as triple patchwork tables made from reclaimed wood and an extensive use of raw steel. The store will use mannequins made in rusted wire and it will be the first to include an area dedicated to the brand’s footwear collection.

In addition to offering Superdry’s men’s and women’s apparel, denim, swimwear, fragrance, accessories and footwear, it will offer items exclusive to Times Square, such as tin-tab T-shirts, knitwear, dresses and lightweight scarves.

For fall, Martens said, the company will begin selling men’s blazers, pants, dress shirts and ties, as well as a more dressy women’s wear offering. The men’s wear prices will range from $200 to $300 for blazers and just less than $100 for wool pants to $30 for ties.

The company currently boasts sales of around $1,000 a square foot at its 10 U.S. stores, Turlinski said, and comparable-store sales in the first quarter were up 50.1 percent. “The traffic here [Times Square] is three times that of the Broadway store,” Turlinski said, “so we’re expecting sales per square foot of at least that or more.”

Plans call for more units in the U.S. in coming years. Superdry is close to inking a deal for a 5,000-square-foot street-level flagship in San Francisco, a short walk from its existing store in the San Francisco Center.

Turlinski said when Superdry opened its first store in the U.S. market in New York City, the thought was to eventually have 100 to 125 stores around the country. “But as we’ve improved our sourcing and reduced our sourcing costs, our pricing has moved closer to Abercrombie & Fitch,” he said. “When we entered the market, it was about 25 percent above. So now we believe we have the ability to enter major malls, and if you have a good mall concept, you can have 400 to 500 stores.”

Among the markets Superdry hopes to enter are Miami, Boston and Chicago, Martens said.

Superdry operates about 85 stores in the U.K. and an additional 120 globally, Turlinski said.