The new store is more than a decade in the making for the hot streetwear brand.

The pairing of Supreme and San Francisco seems like a match made in skater heaven — so much so that one might wonder why it took so long for the New York-based streetwear brand to plant a flag in the Bay.

Now it finally has and with a bang, as the clang of skateboards hit the bowl, a concave feature typical of many skate parks, but built here into the second floor of Supreme’s new 6th and Market Street location.

Anticipation has been building, ever since word got out that the city granted the trendy brand permission to open its 10,000-square-foot location last year. People have been dropping by for days, even weeks, trying to see what’s inside the brown-paper covered site.

On Wednesday, the paper came down for the preview and party ahead of Thursday’s grand opening, as crowds lined up outside, some for hours. 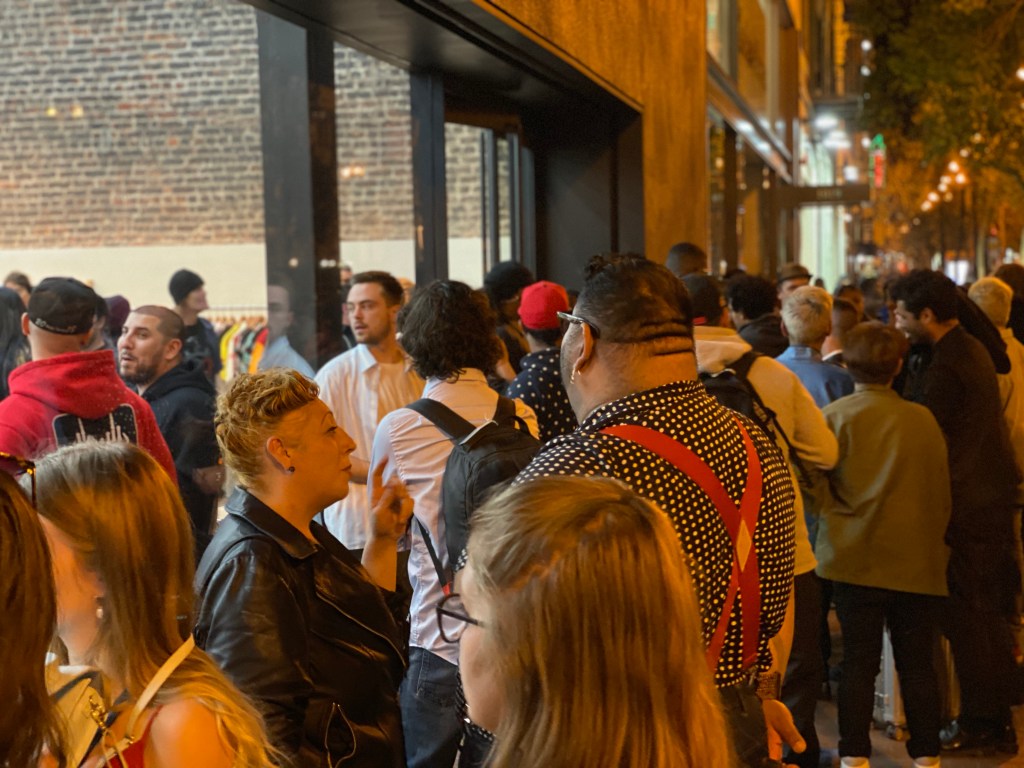 The store swelled with hundreds of partygoers, a mix of loved ones, local influencers, skaters and the odd reporter or blogger. Guests clearly knew each other, with social intimacies and big bear hugs ruling the night.

Large sculptures dot the site, thanks to Mark Gonzales, aka Gonz, artist, professional street skateboarder and Supreme’s frequent collaborator. Gonz’s work can be spotted in the company’s Lafayette Street store, as well as in places like Supreme’s London, Shibuya, Paris and Brooklyn locations. 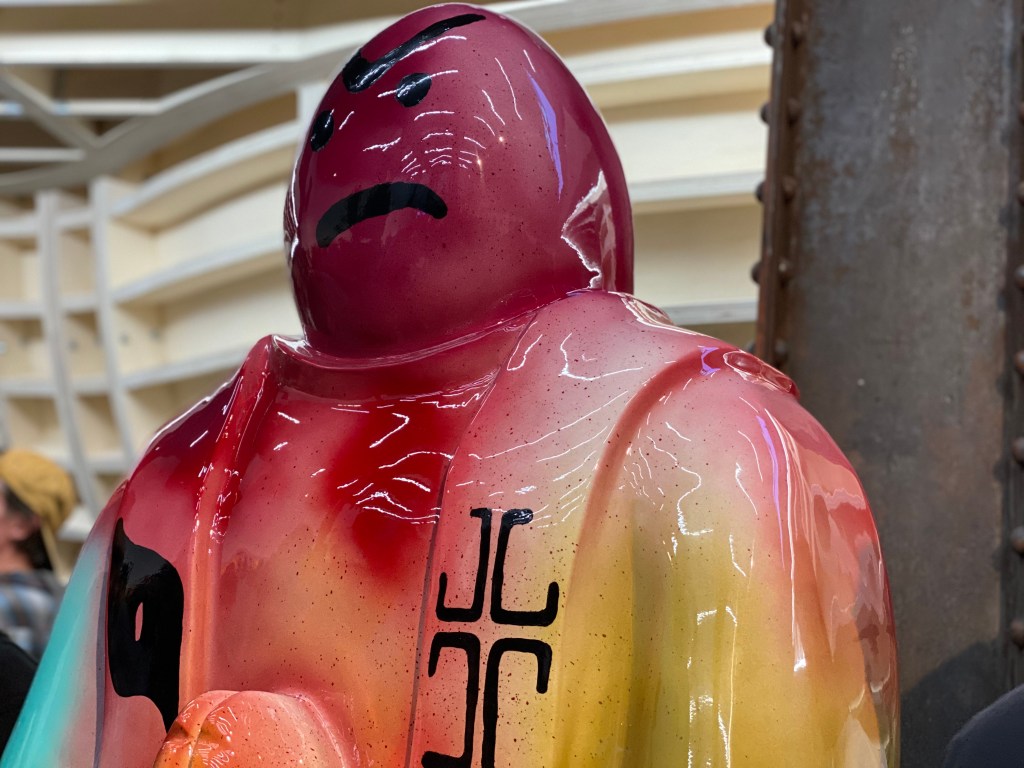 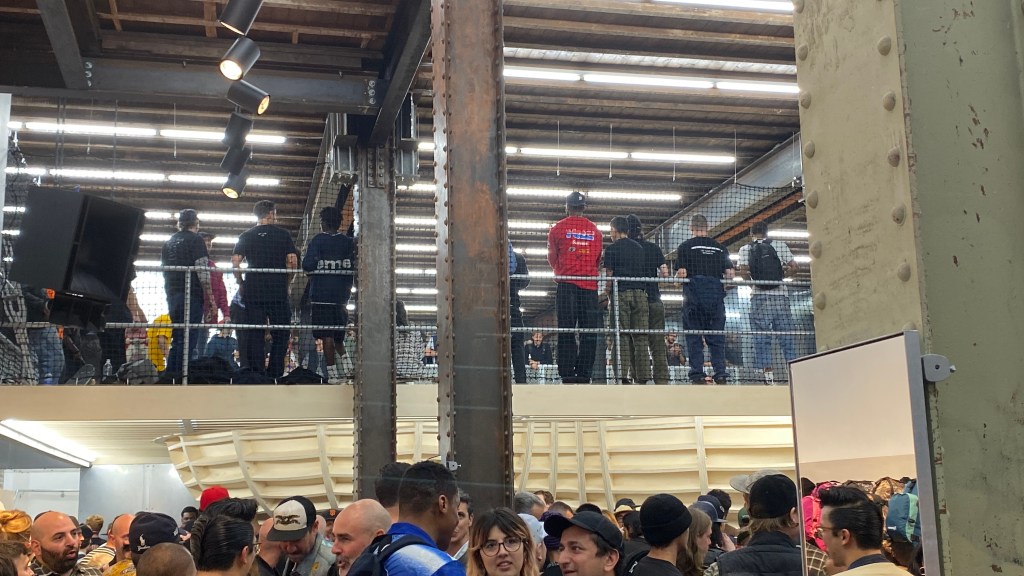 Outsiders might find the scene chaotic, between the blaring music, the big screen piping in skate flicks and the flow of beer and wine, not to mention the stunts taking off overhead, thanks to a skate bowl that’s even deeper than the one in the New York flagship and took up nearly the entire second floor.

But it all makes sense for a company that appeals to underground skate culture. The celebration of Supreme’s completion of a dozen stores worldwide was never going to be a low-key, white glove affair.

People drank, compared boards, laughed and checked out the merchandise — especially the special-edition box logo T-shirt made especially for the new store.

“It’s cool,” one fan remarked, as he took in the action clips from the big screen. “They’re all about skaters, and I like that. It’s not a BS thing.”

The San Francisco location was more than a decade in the making, as the company has been hot to bring its authenticity-touting brand to the Bay’s skate rats. In California, Supreme branched out to Los Angeles first, in 2004, a full 15 years before heading north.

But even a hot brand with a global footprint couldn’t ignore the area’s die-hard skater culture, which cut its teeth bombing death-defying hills, weaving around the city’s vagrants and dodging pulsing traffic. 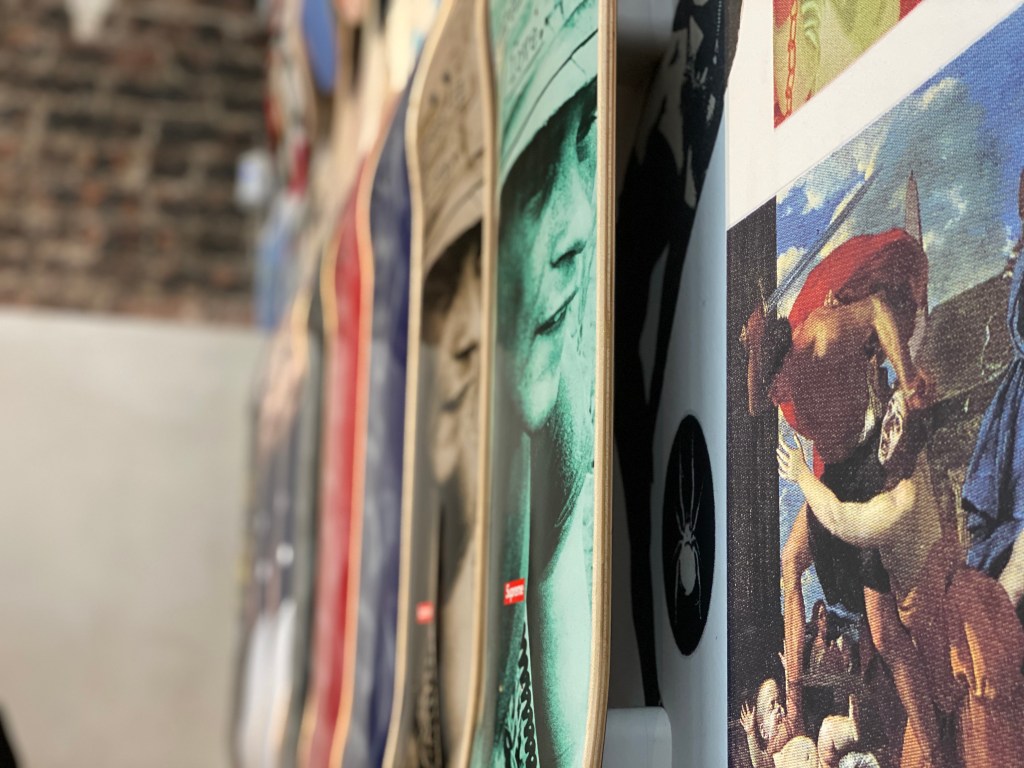 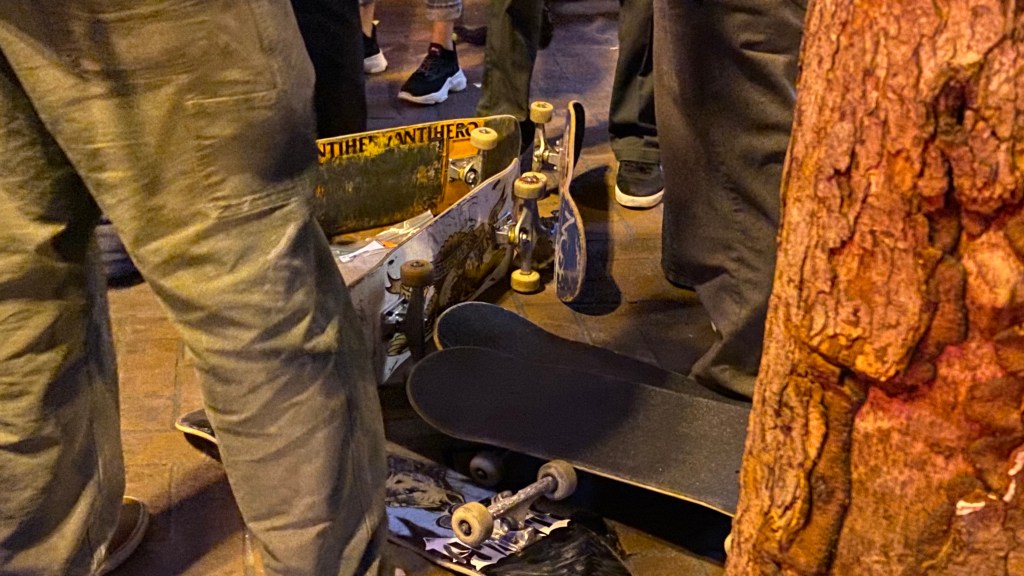 A conclave of skaters, taking a smoke break after partying inside.  Adriana Lee

The location itself is telling. The store borders the city’s Tenderloin neighborhood, an area known as much for its panhandlers and grit as its proximity to the city’s tony shopping areas. Supreme sits just steps from Bloomingdale’s and Nordstrom, as well as Tiffany’s, Louis Vuitton, Michael Kors and Rolex, among others.

These are the domains that Supreme straddles. But it’s not the only one. Another skate shop called Thrasher does business just around the corner. The 10-month-old indie store and skater hangout, owned by professional skateboarder Corey Duffel, operates as part retailer, part clubhouse — a living ode of sorts to San Francisco’s skate culture.

But what Thrasher doesn’t have is a global fan base and fuel for a cottage industry built around a forced-demand model.

Supreme gear, some of which sells for $38 to sub-$200 price points, can fetch thousands of dollars in after-market third-party sales. The effect drives up demand, which the company regularly under-supplies with intentionally limited Thursday drops. 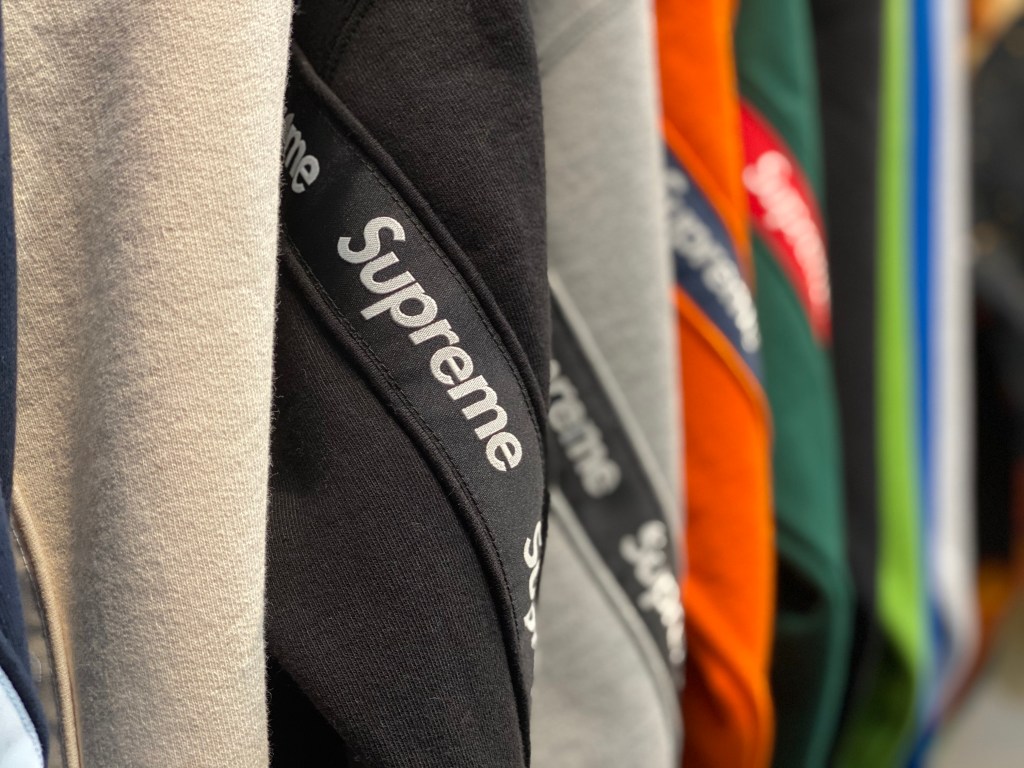 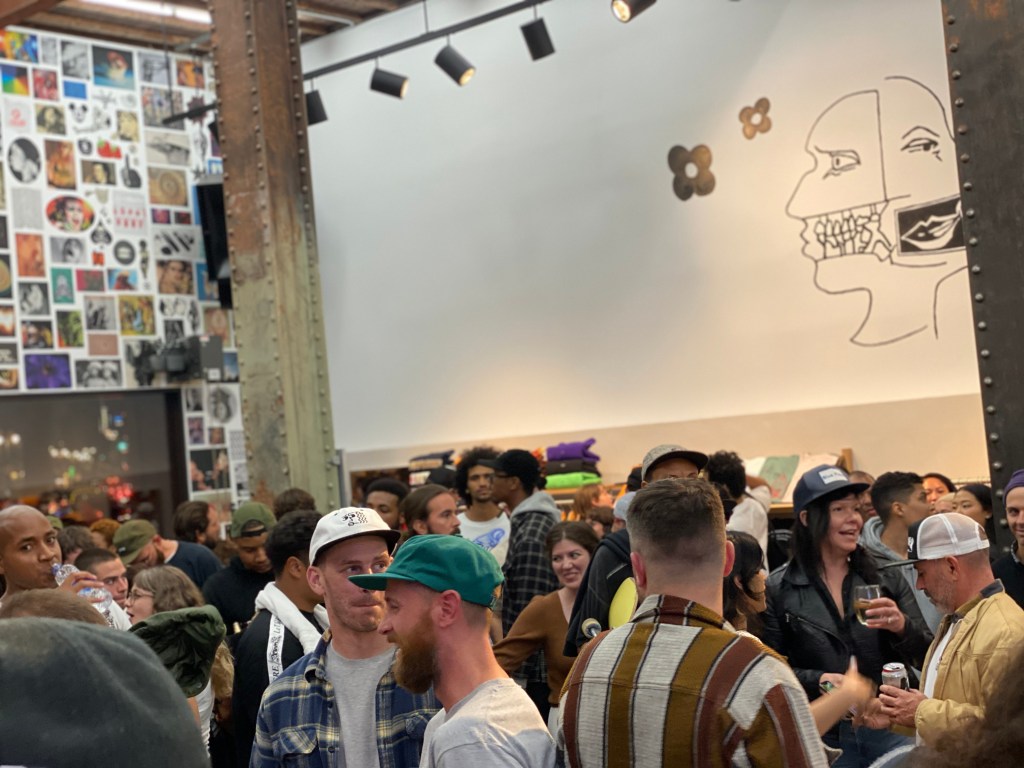 The manufactured scarcity brought out one reseller looking to get in on Day One. “I flew in all the way from New York,” he told WWD, as he stood outside, peering in through the glass walls. “I came for one of those special-edition box logo shirts tomorrow. I’ve done this a few times. It’s worked out pretty good.”

But another passerby shook his head. “Yeah, this area has its problems. But it’s one of the few places in San Francisco that hasn’t completely gentrified, for better or worse,” he said. “Looks like that’s going to change.”