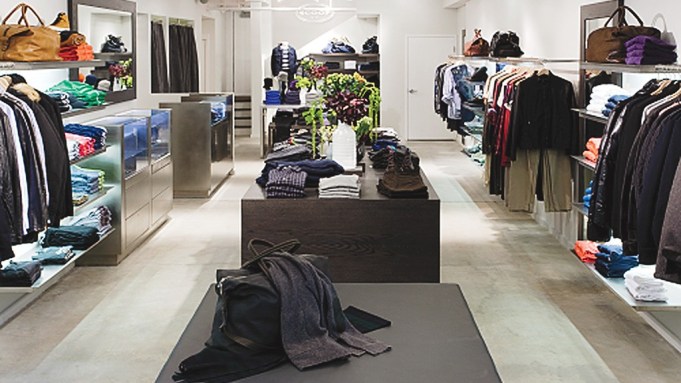 NEW YORK — Scoop is standing on much firmer ground these days.

Since becoming chief executive officer of the contemporary retailer’s operations in September 2009, Susan Davidson has made significant strides in turning it around.

“When I came to Scoop, the stores looked a little tired,” said Davidson, in an interview at her New York office. “I inherited a brand that has great DNA from Stefani [Greenfield]. It had been rudderless for awhile, and I think it was time to get it back to its original DNA, which was a strong one.”

Davidson’s first priority was to bring the 16-unit chain back to its original premise, which was being “the authority on contemporary.” She also wanted to return to its roots of being “the ultimate closet.” With that in mind, she took the retailer into the digital age, opened more stores, and beefed up its designer and private label offerings.

Davidson, who was hired by Ron Burkle’s Yucaipa Cos. after it bought out the Scoop chain, said having the private equity firm as an owner has allowed her to invest in the brand.

“Yucaipa bought the brand because they like the brand,” said Davidson. She said she speaks with someone once a week from the equity fund to report on the business. “Ron has been completely supportive of our strategy. I don’t think he wants to sell it. I don’t want to speak for them. He’s owned Sean John for years. I think he likes the fashion portfolio,” said Davidson.

In addition to her role at Scoop, Davidson is ceo of Zac Posen, another Yucaipa company and splits her time between the two jobs.

Davidson appears to be working hard on several fronts to reinvigorate the Scoop chain, whose stores fan out across the country from East Hampton, N.Y., to The Forum Shops at Caesars Palace in Las Vegas, with shops in Miami Beach, Chicago, Dallas, Boston, Atlantic City, Greenwich, Conn., Manhattan and Greenvale, N.Y.

When Scoop launched in 1996, it was ahead of its time in focusing on the fast-growing contemporary category.

“We had such strong recognizable marketing already built in, we said, ‘Let’s explode it.’ When Stefani started the brand, nobody was doing contemporary, but the rest of the world caught up to us. Not only were Bloomingdale’s, Neiman Marcus, Bergdorf’s, Barneys and Saks all going after the same share of wallet, they’re all doing contemporary,” Davidson said.

So she figured the retailer needed to differentiate itself, and her first priority was to enhance the store experience.

That included an investment in visual merchandising. She added furniture, flowers and mannequins to the stores and made them a lot more inviting. “If you’re buying an upscale product, it needs to have an upscale environment, without being off-putting,” she said. “People would come in and, right away, they’d say, ‘The store looked pretty.’ The men had a place to sit while the women shopped. The flowers smelled nice, and the store looked cared for. We gave it a little TLC,” said Davidson.

Focusing on “the ultimate closet” was the jumping-off point for several key strategies, one of which was increasing the level of designer merchandise in the stores. Designer offerings had been about 8 percent of the business when Davidson arrived, and it is now around 13 percent, with a target of 15 percent. Scoop sells such lines as No. 21 Alessandro Dell’Acqua, Alexander Wang, Burberry, Missoni and Zac Posen, and one of its most profitable is Azzedine Alaïa. “We sell $5,500 Alaïa dresses without blinking,” she said.

Her buyers scour the world looking for brands that no one else is carrying, in addition to stalwarts such as Alice + Olivia, Helmut Lang and Rag & Bone. “We have a lot of resources with our parent company. We have people who travel all the time. We shop Paris, we shop the world markets, we look for brands that are different. We look for new and emerging designers. Yes, we have the contemporary brands that the world knows. That gives you credibility. But then we’ll find some dresses that no one’s heard of. [For example] we carry a brand called Sea on Canal Street that has great dresses,” she said.

Jeanswear is another important category, accounting for 20 percent of the business. Scoop offers brands such as Habitual, Hudson Jeans, Rag & Bone, Citizens of Humanity, AG and Current/Elliott.

In the past year, Scoop has resumed expanding its retail footprint, and this year plans to open five stores. In April, Scoop will open a 2,700-square-foot store in Brentwood, Calif. Davidson acknowledged that L.A. is a very competitive market, but “Brentwood is very much like Greenwich, and Greenwich is so strong for us. The per capita is about the same, and the size of the market is about the same. It’s no secret we’re also looking in Beverly Hills,” she added.

The chain opened a second store in Chicago on Rush Street in June, and a unit on Newberry Street in Boston in November. “Both are exceeding plan. Boston is a brand-new market for us entirely,” she said. The two-story town house, which is on the small side at 2,800 square feet, is doing a brisk business in designer merchandise, as well as outerwear, sweaters and fur accessories, a natural for the cold Boston winters, she said. “The small store houses as much merchandise as a 5,000-square-foot store. We figured out ways…it’s very efficient, and it’s cozy,” she said.

Scoop’s flagships in Manhattan are significantly larger than the Boston unit. The Meatpacking District store is 8,000 square feet, while the SoHo store is 10,000 square feet. Average sales per square foot throughout the chain are over $1,000, said Davidson, “but the New York stores are wildly in excess of that, which is high for a specialty store. Boston will be off the charts.”

Each of the Scoop stores are dual gender, she pointed out. Men’s accounts for close to 30 percent of the business.

Davidson said she continues to scout new locations for Scoop and said there are still cities in the U.S. where they would like to open stores, such as the Georgetown neighborhood of Washington, D.C., and the Upper West Side of Manhattan. “We hold focus groups, and we have professional people running them to find out where people enjoy shopping,” she said.

After having struggled for a time before Davidson took over, Scoop is now on firmer financial footing. Industry executives have noticed a difference in Scoop’s communication with the financial community.

Gary Wassner, ceo of Hilldun Corp., the factoring firm, said he started approving orders from Scoop for the first time in its history in December. “We have been doing more and more business with them. They pay us extremely well, and we’ve reached a meeting of the minds there. We approve every order that comes in.” Wassner said he’s pleased with the store’s performance overall and their communication. “They look different and they’re more focused. I like the mix of the product,” he said.

Another area that Davidson beefed up is the store’s private label merchandise, which now accounts for 15 percent of the business, up from 9 percent when she arrived.

“Because of my experience at wholesale, I know factories. I have access to so many designers. I hire freelancers to design our sweater program. We go directly to the factories. It’s also very profitable. We’re eliminating the middleman,” said Davidson. Under private label, Scoop offers cashmere sweaters, silks and dresses.

A big initiative since Davidson arrived has been bringing the retailer into the digital age. The store launched an e-commerce Web site in November 2010, and Davidson described it as very successful. “The site has surpassed our expectations. We continue to give a disproportionate amount of dollars to Web-related, digital projects, including social media. We’re quickly trying to get up to speed,” she said. For example, in the past six months, Scoop has tripled its fan base on Facebook to 9,000 fans. “Every four to six weeks, we do a giveaway and an exclusive,” where they partner with vendors. “The most interesting thing about this is we have 20 percent engagement. We have 1,800 people [our fans] talking about us at any given time,” said Davidson.

She’d like to equip the stores with iPads and create a mobile-optimized Web site. At the end of the year, they’ll start looking at developing an app. Davidson’s goal is to put as many brands as she can on Scoop’s e-commerce site, scoopnyc.com. “Everything that can be put online, we put online. If a vendor feels they are too overdistributed, we honor our relationships,” she said. While the Web site hasn’t become its biggest account yet, “It’s exceeded plan dramatically and we expect it to continue doing so.”

Davidson believes Scoop can eventually grow into a 30-unit chain. “There are still markets we haven’t tapped. I think too many is not good,” she said. She’s also would like to open stores internationally (Brazil, Mexico City, Europe, and Asia are on her wish list), but that won’t be for another three to five years because of the complexities, currency fluctuations and other issues, she said.

“There’s still so much we can do here,” said Davidson, before the retailer considers venturing abroad.